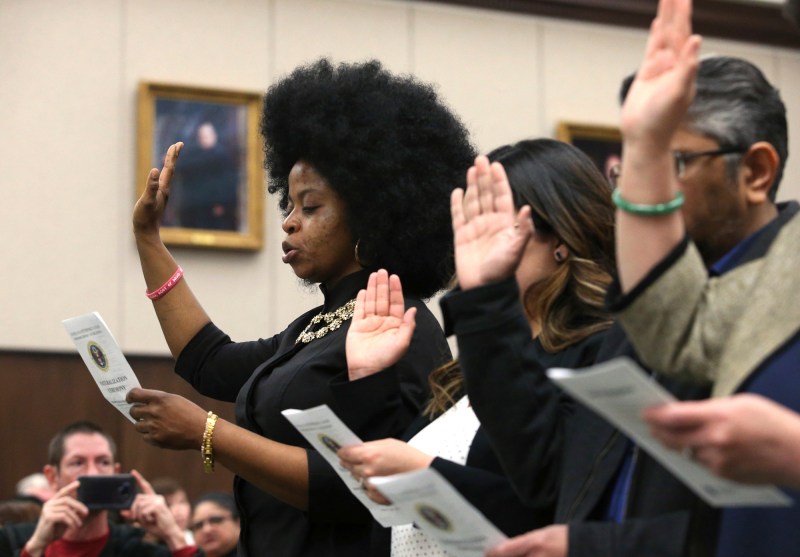 Mabelle Ajah of Cameroon takes the oath of citizenship at a naturalization ceremony last month in Tulsa, Oklahoma. Matt Barnard/AP

In 1995, the British immigrant turned American white nationalist Peter Brimelow began his book Alien Nation with an usual argument: Immigration to the United States was Adolf Hitler’s “posthumous revenge” on America because “mass immigration” was transforming and potentially destroying the “American nation.” David Frum, now a staff writer for The Atlantic and a prominent #NeverTrump Republican, blurbed Brimelow’s book, calling it a “formidable work.” Since then, Americans have become dramatically more supportive of immigration. Frum, evidently, has not.

On Monday, The Atlantic published a cover story in which Frum calls for a radical cut to legal immigration in the name of promoting assimilation and warding off fascism. Frum cites the election of Donald Trump as evidence of a widespread backlash to immigration. He argues that Americans feel threatened by rising levels of immigration and will turn to more right-wing extremists like Trump unless Washington implements new policies that sharply reduce immigration. “Many Americans feel that the country is falling short of its promises of equal opportunity and equal respect,” he writes. “Levels of immigration that are too high only enhance the difficulty of living up to those promises.” But do Americans actually think there’s too much immigration? The answer, according to polling data, is a resounding no.

Last year, only 24 percent of Americans supported cutting legal immigration, down from 40 percent in 2006, according to data provided to Mother Jones by the Pew Research Center. Among Republicans without a college degree, the heart of Trump’s base, 59 percent say legal immigration should be increased or kept at the present level. That makes them slightly more supportive of legal immigration than the average Democrat was 12 years ago. Since Frum praised Alien Nation, the share of Americans who say immigrants are a burden on the country has dropped from 63 percent to 28 percent.

Here’s what the data say about the supposed immigration backlash:

Frum does not cite the Pew and Gallup data in his nearly 8,000-word article. Instead, he returns to arguments that have been staples of the nativist lobby for decades. For example, he highlights an environmentalist case for reducing immigration by claiming that Americans emit 45 times more carbon than the average Bangladeshi. Per-capita GDP in Bangladesh is, not coincidentally, about 40 times lower. There are many serious plans for mitigating climate change, but keeping large portions of the world in extreme poverty is not one of them.

The heart of Frum’s argument is that some white people have authoritarian tendencies and that immigration tends to set them off. To keep their fascism and racism (a source of nativism Frum never seriously explores) in check, he suggests that the United States cut legal immigration by about half, roughly the same amount backed by the Trump administration. But given that support for immigrants is now at or near record highs, it’s unclear why 2019 should be the year the United States finally adopts the anti-immigration agenda Frum has been pushing for decades.

The article does have at least one fan, though: Peter Brimelow. In 1999, Brimelow founded VDare, a white nationalist site named for the first English girl born in North America. On Monday, Brimelow tweeted a response to Frum’s article: “There’s nothing here that VDARE.com hasn’t been saying for 20 years.”