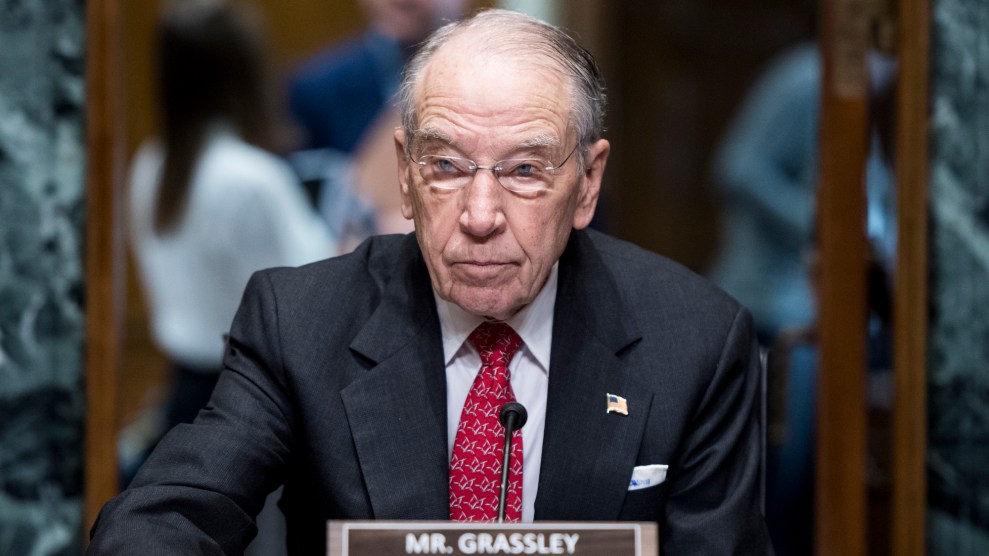 Sen. Chuck Grassley is once again blocking the confirmation of a nominee for a top counterintelligence job in an effort to win access to sensitive material on the origin of the FBI’s Trump-Russia investigation.

The Iowa Republican imposed a hold in June on the nomination of Bill Evanina as director of the National Intelligence and Security Center, an office under Director of National Intelligence Dan Coats. Grassley, who at the time chaired the Senate Judiciary Committee, said last year that he would object to a vote on Evanina’s confirmation until the Justice Department gave his committee information on its probe into contacts between President Donald Trump’s 2016 campaign and Russia.

Grassley renewed the hold Tuesday after Evanina was renominated and approved unanimously by the Senate intelligence committee last week. The senator did so even though he no longer chairs the judiciary committee, where he oversaw the Justice Department; he now heads the finance committee instead. What’s more, the senator says his objection “is not intended to question the credentials of Mr. Evanina in any way.”

Grassley’s objection is instead part of a dispute with his former Senate Republican colleague, Coats, who Grassley says has instructed the Justice Department not to give Grassley the information he wants. “The administration’s continued, ongoing, and blatant lack of cooperation has forced my hand,” Grassley said in a statement placed in the Congressional Record on Tuesday.

Critics say the hold is also an indication of how far some congressional Republicans will go to question the basis of special counsel Robert Mueller’s investigation. “Bill Evanina is an extraordinarily qualified public servant and it’s frankly ridiculous that his Senate confirmation continues to be delayed over unrelated political requests from a member of the president’s own party,” Sen. Mark Warner (D-Va.), the top Democrat on the intelligence committee, said in a statement Wednesday. “From brazen Russian espionage, to Chinese IP theft, to insider threats, our country is facing an enormous number of thorny and complex counterintelligence challenges. We need a Senate-confirmed leader to head our nation’s counterintelligence strategy.”

Last year, Grassley cited multiple reasons for his hold, including apparent references to Evanina in text messages between former FBI agent Peter Strzok, who was fired by the bureau in August, and Lisa Page, a former bureau attorney. Strzok—who worked on the bureau’s investigation into Hillary Clinton’s private email server and initially on the Trump-Russia probe—and Page famously disparaged Trump in some of their messages, but their references to Evanina were routine. And Evanina satisfied that part of Grassley’s concerns through a classified letter he sent the senator last summer, according to a Grassley spokesman. But Grassley has continued blocking the nomination because he says the Justice Department refused to give him information on origins of the Trump-Russia probe, including the identity of confidential FBI informants. Grassley says the FBI already gave this information to the House intelligence committee last year after a long fight but that the bureau would not provide it to him.

Michael Zona, a Grassley spokesman, said Grassley still objects to confirming Evanina, despite no longer chairing the judiciary committee, because “oversight responsibilities aren’t just for chairmen of committees of jurisdiction, but all members of Congress.”

Senate Majority Leader Mitch McConnell could overcome Grassley’s roadblock by holding a roll-call vote to confirm Evanina rather than the simpler unanimous consent process the Senate often uses to confirm noncontroversial nominees. But McConnell has so far been unwilling to devote Senate floor time to the nomination.