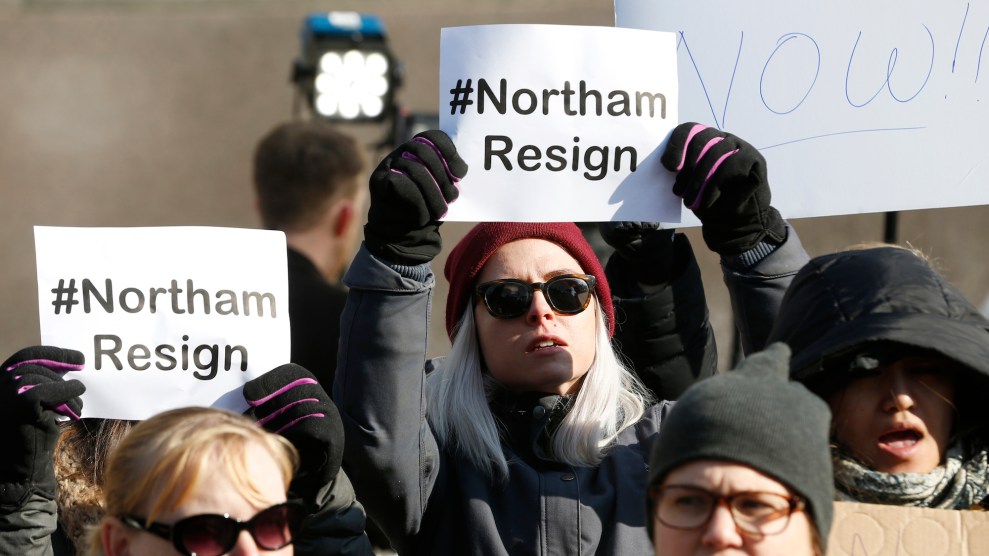 There’s a crisis unfolding at the top of the executive branch in Virginia. The politicians occupying the state’s three highest offices—Gov. Ralph Northam, Lt. Gov. Justin Fairfax, and Attorney General Mark Herring—have each found themselves embroiled in scandals: Northam admitted (and later denied) appearing in a racist photo of a man in KKK robes and another in blackface; Herring admitted to wearing blackface when he was in college; and a college professor has accused Fairfax of sexual assault. There have been calls for each of them, all Democrats, to leave office immediately.

In the near term, the crisis could jeopardize the monopoly Democrats have held on the executive branch for the last decade. Should the offices of governor, lieutenant governor, and attorney general all become vacant, the next in line for the governorship is Virginia’s speaker of the House—a Republican. And the lingering legacy of the scandal could hurt the long-term health of the state’s Democratic Party, which has lately seen tremendous gains in the purple state: After Democrats narrowly missed gaining control of the state Legislature in 2017—a random drawing settled a tied district vote and gave control to Republicans—the party flipped three GOP-held congressional seats during the 2018 midterms.

Mother Jones spoke with Ravi Perry, the chair of the political science department at Virginia Commonwealth University, about how Virginia’s line of succession makes it unlikely that a Republican would replace Northam and what the short- and long-term implications of this episode might be on the future of the state’s Democratic Party.

Mother Jones: There have been calls from national Democrats for all three officials to resign; the state party, meanwhile, has called for Northam’s resignation while it hasn’t done the same for Fairfax or Herring. Do you get the sense that Virginia Democrats want to see Northam, Fairfax, and Herring out of office?

Ravi Perry: I think it depends on who you ask. There’s a split—I see a lot of older Democrats who are saying, “You know, let them ride it out.” Those in the millennial crowd, though, just aren’t buying it. There’s a very clear division in the Democratic Party, and my observation is that it’s more of a generational divide than a racial divide.

“They need to figure out a way to speak for a party and heal a state, and the only way you can do that is through staggered resignations.”

As far as folks drawing distinctions between Northam and Herring’s blackface incidents and the allegations facing Fairfax, that’s become a quagmire. There’s a contingent of black Democratic folks who were really looking forward to Fairfax becoming governor, and then 48 hours later became dismayed, disappointed, and shocked by the allegations raised against him. Some seem to draw a line between the two issues. My problem with that is we don’t treat sexual assault, women, or gender identity issues with the same level of concern as racial issues. And to be clear, as a black man, we don’t do race well either. But this is a patriarchal society, and to me, there’s a pervasive, toxic masculinity that lets people excuse behavior of men toward women. In a situation with race, that doesn’t happen as much. But these issues inevitably have to be treated with the same level of concern.

MJ: Does that ambivalence have anything to do with the fact that, if all three resign, a Republican is in line to ascend to the governorship?

RP: No. The only way that Kirk Cox will become governor is if all three resign at the same press conference. If there are staggered resignations, then Democrats can keep control. For example, if Northam steps down, Fairfax would become governor, and he could immediately appoint a new lieutenant governor to take his place [for the very brief in-between moment, the Virginia Senate’s president pro tempore, Republican Steve Newman, would assume duties]. Then, once Fairfax resigns, his appointed lieutenant ascents to the governorship. Article V, Section 16 of the Virginia Constitution says the speaker is next in line, but that only refers to when all three spots are vacant at once. This also works out if Fairfax resigns first: Northam can appoint a new lieutenant who would then become governor. There’s just not going to be a Gov. Cox, I can tell you that.

[There’s little precedent as to how long appointees would remain in office—the Virginia Constitution doesn’t cover every scenario—but there would likely be a special election to replace them that coincides with the 2019 Virginia delegate elections, Stephen Farnsworth, a political science professor at Mary Washington University, tells Mother Jones.]

The reason Democrats should figure out how to retain these seats is because that’s what the voters wanted. They voted for Democrats. They need to figure out a way to speak for a party and heal a state, and the only way you can do that is through staggered resignations. Democrats have had control over these three seats for the last 10 years, and that’s never happened in the modern history of Virginia politics. It’s unprecedented, and they’re interested in retaining them.

MJ: What implications do these allegations have on the Virginia Democratic Party?

RP: In the short term, the party needs to do a self-evaluation: Why the hell wasn’t this caught in the vetting process? When you run for office, the party is supposed to ask you about these sorts of things. Did the candidates supply the information? Did the state party’s screening committee follow up and investigate? Or, as happens in most states, were these guys presumed to be good because they’re part of a good ol’ boy network and the assumption is we don’t have to screen them? Somebody dropped the ball—these are the kinds of things that should not have come out.

“There’s a very clear division in the Democratic Party, and my observation is that it’s more of a generational divide than a racial divide.”

How could [former Virginia Gov.] Terry McAuliffe, who has been contemplating a presidential run, not know this about his lieutenant governor? It’ll be interesting to see what happens with [Virginia Rep. Bobby] Scott [who allegedly had prior knowledge of Fairfax’s sexual assault allegations]. If people were made aware of sexual assault or racial incidents and they did nothing, that’s not only illegal, it’s unethical, and that would be a huge concern for the Democratic Party.

MJ: And what about the implications on Democratic voters?

RP: It’s impossible for a Democrat to win a Virginia statewide office unless you have a large and enthusiastic turnout from African Americans—they have to outperform the numbers that political scientists like me expect of them. Northern Virginia has made it easier for Democrats to win, but its contribution still hasn’t pushed the threshold to the point at which it’s totally easy. You still need to pull African American votes in from the Norfolk region and central Virginia—especially African American women, who this situation could alienate the most. Black millennials, too, are already disillusioned—that was part of the reason Hillary Clinton lost in 2016. And looking beyond just the state government, there are no models that allow Democrats to win the presidency in 2020 that don’t include Virginia.

The longer that any one of these people are in office increases the chance for Donald Trump and the Republicans to win election, because they’ve taken away the main messaging line of the Democratic Party: “Trump is a racist, Trump is a sexual assaulter, look at those comments.” Now that argument is moot, because every conservative commentator is going to be saying “Sure, but what about Virginia?”

MJ: Virginia is a purple state, but it wasn’t always, and it’s been rapidly turning bluer with each election cycle. Do you think the speed of political change in Virginia has had any role in how politicians who have engaged in racially offensive behavior have been able to ascend to the state’s highest offices?

RP: There’s a lot of complacency as it relates to how Americans choose to deal with racial issues. For example, look at the phrase “reconciliation.” Virginia just designated 2019 a “Year of Reconciliation and Civility” meant to commemorate the 400th anniversary of African arrival on Jamestown’s shores. You only hear that word “reconciliation” in the South among conservatives who are attempting to frame themselves on this question.

I bring this up because the kind of candidate who can rise to the top in a competitive Democratic primary is often the kind of person who is conservative on certain social issues and can still claim to be a member of the Democratic Party. Look at Northam, for example. He’s billed as a liberal, but really, he’s more aligned with the Clintons than he is with Kamala Harris. That’s why these allegations aren’t surprising to some of us. The fact that you would see these old yearbook photos and white politicians in powerful positions who thought it was a good idea to put on brown makeup, that can be totally explained. Remember, Virginia was the capital of the Confederacy.