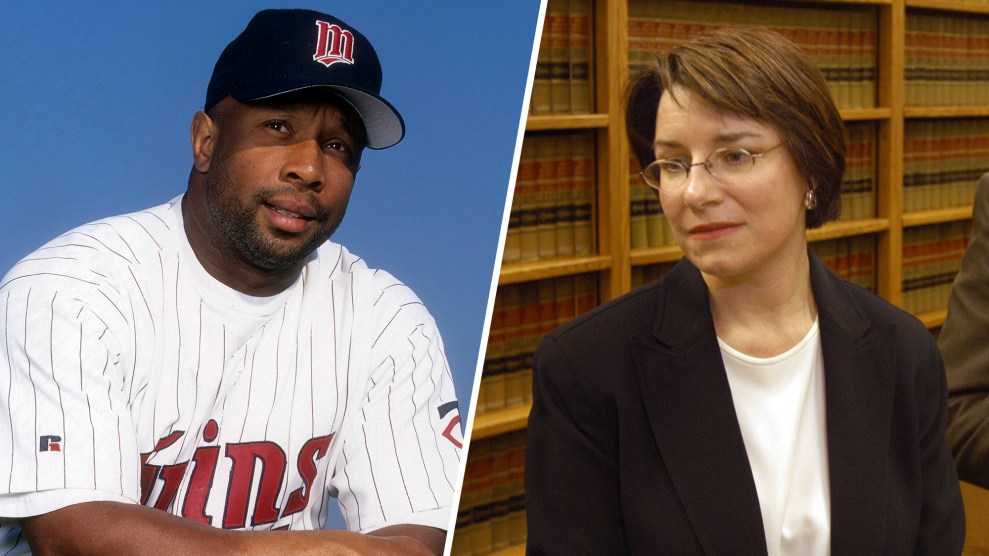 In 2002, Amy Klobuchar found herself in the unenviable position of deciding whether to prosecute a sports star for an alleged sexual assault. At the time Klobuchar, now a US senator from Minnesota and a likely Democratic candidate for president in 2020, was the chief prosecutor for Minnesota’s largest county, and the star in question was Kirby Puckett, a baseball Hall of Famer and one of Minnesota’s most beloved sports figures.

The case was a risk in the courtroom. The facts boiled down to a “he said, she said” case in which juries are often loath to convict, especially when the alleged perpetrator is a hometown hero. Most aspiring politicians would have likely preferred to campaign with Puckett than prosecute him. But Klobuchar, who was weeks from reelection as county attorney, took a gamble and charged the retired Minnesota Twins center fielder. Puckett, who died in 2006 at the age of 45, was ultimately acquitted.

Though it was nearly 20 years ago, the episode encapsulates two dominant themes that have emerged in Democratic politics and are likely to play a significant role in the 2020 primaries. Democrats have embraced the #MeToo movement, which ultimately seeks to empower survivors and hold perpetrators—especially powerful men—accountable for harassment and assault. This movement has sprung up alongside the issue of criminal justice reform, in which progressives have grown critical of hard-nosed prosecutors as drivers of mass incarceration and unethical prosecutions.

Klobuchar, who was first elected to the Senate in 2006, is expected to announce her candidacy for president on Sunday in Minneapolis. In the Senate, she has not focused on criminal justice reform, though earlier this year she said in an interview that “there is racism in the system that needs to be fixed.” And she backed bipartisan sentencing reform legislation, the First Step Act, which passed in December.

Klobuchar won her first race for Hennepin County attorney in 1998 and was reelected in 2002, long before criminal justice reform had shook the tough-on-crime consensus. She campaigned as a law-and-order candidate who would tackle crime, and there are elements of her record as a prosecutor that could haunt her in the Democratic primary. According to statistics from her time on the job, her office generally sought maximum penalties. When the county drug court started prioritizing probation over jail time for first-time offenders, she opposed the trend. During her tenure, the proportion of black children moved through the county’s juvenile detention facility rose even as the overall number of kids in the system declined. Thomas Shiah, a criminal defense attorney in Minneapolis, describes her performance as county attorney as “firm but fair.”

The Puckett case was tricky for the prosecution because it ultimately came down to Puckett’s word against his accuser’s. A 34-year-old woman, who was identified in court documents by the initials K.L., alleged that on September 6, 2002, the retired Minnesota Twins star, who a year earlier had been elected to the baseball Hall of Fame, had dragged her into the men’s bathroom late one night at a suburban Minneapolis restaurant, shoved her into a stall, and grabbed her breast. K.L.’s friend would later testify that she had tried to stop Puckett and had shouted K.L.’s name into the bathroom about 20 seconds after they disappeared inside. Her friend’s yelling, K.L. believed, prompted Puckett to release her. The woman told multiple people in the bar about the episode and ultimately called the police. Puckett’s version of events was quite different. He claimed there had been a line for the women’s bathroom, so he had escorted K.L. into the men’s bathroom so she could use it. When she had seen other people in the bathroom, she had decided to leave.

“I thought it was pretty amazing that he was charged in the first place,” says Suzanne Elwell, who observed the trial as executive director of WATCH, a court-monitoring nonprofit focused on sexual assault victims. After watching numerous athletes escape prosecution for violent crimes in subsequent years, her amazement that Puckett was charged has only grown.

The defense saw it differently. To them, Klobuchar targeted a celebrity because she didn’t want to look weak. “I never believed that there was any basis to charge him in the first place,” recalls Christopher Madel, one of Puckett’s defense attorneys. “If you ask me today, do I think that he got treated differently because he is a celebrity? Yes.” Madel remembers Puckett as one of his favorite clients in his nearly 30 years of practicing law.

“[O]ur prosecutors believed her account of what had happened,” Klobuchar wrote years later in her 2015 memoir, The Senator Next Door: A Memoir from the Heartland. The victim had bruises and, in addition to K.L.’s friend, there was another witness who said he saw Puckett pull her into the men’s bathroom. “Our prosecutors strongly recommended charging Puckett: they cited numerous cases in other circumstances where we had filed similar charges, and we knew that we would have brought charges if the defendant was not a celebrity.”

Madel recalls prosecutors in Klobuchar’s office contending that they had pursued charges in similar cases. “I will respectfully disagree with that to my dying day,” he says. To him, the evidence was too weak to go to trial.

But Klobuchar didn’t see it that way, and her office charged Puckett with felony false imprisonment, fifth-degree criminal sexual conduct, and fifth-degree assault. Puckett hired Madel and B. Todd Jones, a former US attorney for Minnesota who would go on to a second stint as US attorney and then run the Bureau of Alcohol, Tobacco, and Firearms under President Barack Obama. Today, Jones is the chief disciplinary official for the NFL, where his job is to investigate and punish player misconduct, including allegations of assault off the field. But at the time, Jones attributed the charges against his client to his VIP status. “This stuff happens every weekend at some eating and drinking establishment in Hennepin County, and it is rarely charged,” he told the Star Tribune at the time of the case. “They have better things to do with their resources than to go around prosecuting false imprisonment cases from a woman being taken into the men’s room or a man being taken into the women’s room at a bar at closing time.”

The gregarious Puckett was a beloved figure in Minnesota not just for leading the Minnesota Twins to two World Series victories, but also for his charity work and loyalty to the community after the center fielder’s career abruptly ended at age 35, when glaucoma caused him to lose sight in one eye. His jersey number, 34, was retired. The Twins hired him as an executive vice president, a largely symbolic position, so Puckett could continue to be part of the team and so the team could continue to claim him. His new job was located at 34 Kirby Puckett Place.

But Puckett’s reputation took some serious hits in the year leading up to the assault charges. In December 2001, his wife, Tonya, accused him of threatening to kill her during a fight over the phone. This led her to tell police of a history of violence in their 16-year relationship, allegations that became public. When they divorced a few months later, allegations surfaced that Puckett had a longtime mistress. The week before his trial began in March 2003, Sports Illustrated ran an eight-page cover story detailing the sports icon’s fall from grace. As Madel recalls, by the time of the trial, public opinion was split and the press was not kind to Puckett.

Klobuchar tried to carefully balance the public’s adulation for Puckett with the charges against him. “Like most Minnesotans, I remember watching Mr. Puckett help the Twins win two World Series, and he’s a great Hall of Fame baseball player,” she said in announcing the charges. “But that night, in that bar, he was no one’s hero.” Klobuchar didn’t try the case herself (in fact, she never personally tried a case as county attorney) and instead chose a veteran prosecutor from her office named Alan Harris. The first witness was K.L. “He’s pulling me, and I’m afraid,” she testified. “I tried to drag my feet.”

The prosecution introduced several witnesses, including K.L.’s friend, who testified that Puckett had pulled her into the bathroom, and a man who had witnessed K.L. being taken into the bathroom. Puckett testified in his own defense. His lawyers helped discredit the second witness by stressing that the man had downed six beers that evening. They claimed that K.L. was drunk and found a witness who testified that she had bared her breasts to a group of people at the bar earlier that night, which K.L. denied and the prosecutors objected to as a smear tactic. After eight hours of deliberation, the jury acquitted Puckett of all charges. Without a witness in the bathroom, they didn’t find proof beyond a reasonable doubt.

As Klobuchar considers a presidential run, Madel says he isn’t holding the Puckett case against her. Overall, he recalls, she ran the county attorney’s office very well. “Do I feel like [charges] should have been brought? Absolutely not,” he says. “At the same time, am I likely to max out my contribution to Sen. Klobuchar’s presidential run? Yes.”