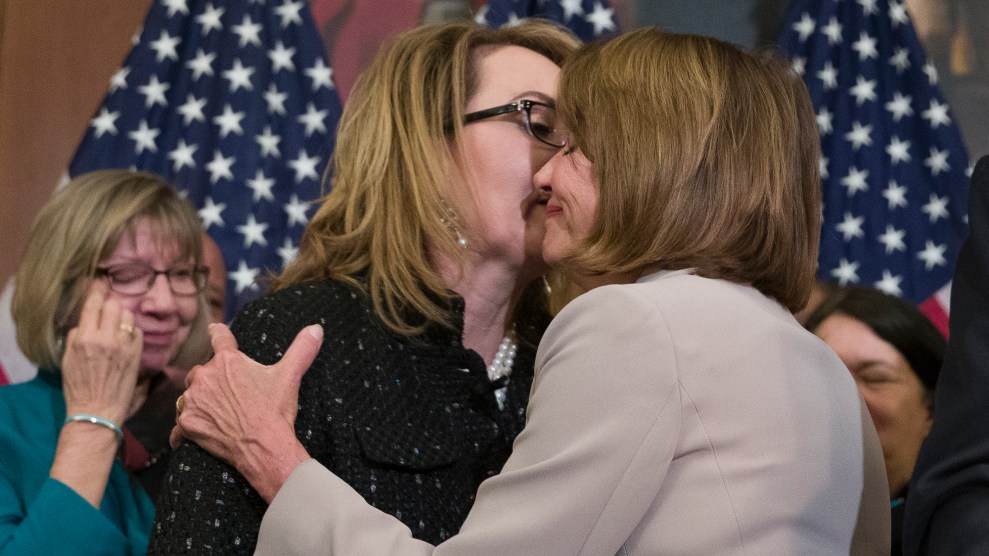 The House of Representatives passed a bill on Wednesday that would require a background check for every gun sale. This is the first time that federal legislation requiring universal background checks reached a vote in Congress. Its passage marks a historic milestone for the gun reform movement, which has fought to bring the measure to lawmakers’ attention since the 2012 Sandy Hook Elementary School shooting in Newtown, Connecticut.

House Democrats were expected to unanimously support the measure, and they nearly did: Only two Democrats, freshman lawmaker Jared Golden (D-Maine) and Collin Peterson (D-Minn.) voted against the bill. But Republican support remained an open question until the vote: Democrats had touted the bill as a bipartisan measure—they even named it the “Bipartisan Background Checks Act of 2019”—but only five GOP lawmakers agreed to co-sponsor the legislation in advance of the vote.

And today, only a handful of Republicans joined their Democratic colleagues with a “yea” vote. In addition to the bill’s five co-sponsors—Reps. Peter King (N.Y.), Brian Fitzpatrick (Penn.), Fred Upton (Mich.), Brian Mast (Fla.), and Chris Smith (N.J.)—Reps. Vern Buchanan and Jose Diaz-Balart from Florida and Will Hurd from Texas voted yes. Those who voted to pass the legislation occupy seats in increasingly purple districts that they’ll have to fight to keep in 2020.

The bill passed with two last-minute additions: Rep. Doug Collins (R-Ga.) added a provision that would require Immigration and Customs Enforcement to be notified when an undocumented immigrant tries to buy a gun, an addition that put Democrats, who have voiced sharp criticism of ICE, in a tough spot. An amendment from Rep. Kendra Horn (D-Okla.), which creates a background check exception for people who face risks of domestic violence and abuse, was also adopted on the floor.

Activists have lauded the vote as a marker of how much the politics of gun reform has changed. Congress hasn’t passed major gun legislation since 1994, when former President Bill Clinton signed into law bills that created the federal background check system and a temporary assault weapons ban that expired in 2004. The passage of both pieces of legislation celebrate their 25th anniversary this week, but the legacy is mixed. Democrats blamed their losses during the 1994 midterms on that vote, which scared many members of the party away from the issue.

In the wake of activism ignited by the 2018 massacre at Stoneman Douglas High School in Parkland, Florida, Democrats made universal background checks a key plank in their platforms and won. Those victories pushed both House leadership and the freshmen Democratic lawmakers to make gun measures a top priority in the new Congress. “This is representative of how far the politics have shifted,” says Peter Ambler, the executive director of Giffords, the gun violence prevention organization founded by former Arizona congresswoman and mass shooting survivor Gabby Giffords. “Just a few years ago, you might have seen action on guns, but it wouldn’t be this quickly.”

Gun reform advocates have also been looking forward to the vote as a means of getting federal lawmakers on the record about their positions on popular gun reforms like universal background checks, which polls have repeatedly found are supported by more than 90 percent of voters. Political rewards await those who vote on the side of gun reform: Giffords is launching a five-figure digital ad buy to thank 14 freshmen Democrats who flipped Republican seats for their votes—freshmen lawmakers who will certainly face tough reelection prospects in their purple districts.

The initiative aims to hammer home these lawmakers’ commitment to a gun reform agenda, which polls have found contributed to their victory. “Their constituents are still getting to know them as members of Congress, and we want to make sure their constituents know they’re doing in Congress what they said they were going to do on the campaign trail,” Ambler says. “That’s how you build trust with an electorate.”

Everytown for Gun Safety, the gun violence prevention organization founded by former New York City Mayor Michael Bloomberg, is also planning a series of “thank you” ads as part of a $400,000 spend that the group did to encourage House members to vote in favor of the bill.

As for the vast majority of Republicans who voted against the measure, activists will not forget how they performed today. “Our record speaks for itself,” Ambler says, referring to the multimillion-dollar offensive Giffords launched during the 2018 midterms to get gun reform-minded lawmakers elected. “We have time and again held accountable Republicans who voted against the will of their constituents, against gun safety. We’re looking forward to 2020.”