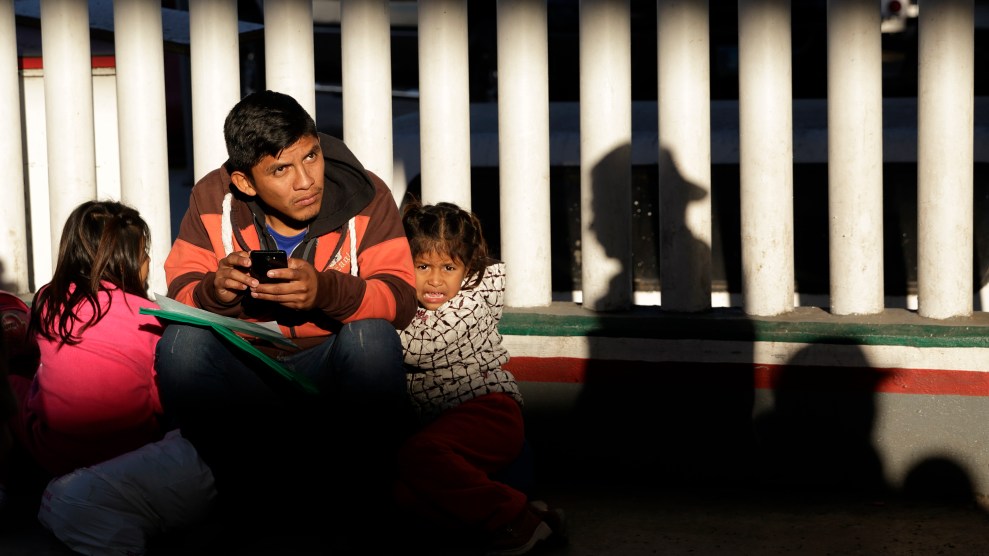 A migrant looks on with his children as they wait to hear if their number is called to apply for asylum in the United States in January in Tijuana, Mexico. Gregory Bull/AP Photo

The Southern Poverty Law Center and the American Civil Liberties Union filed a lawsuit in federal court Thursday to challenge the Trump administration’s policy of forcing Central American asylum-seekers to return to Mexico while they await legal proceedings—something that could take months or even years.

“The Trump administration’s new policy is blatantly illegal under both US law and international law,” Melissa Crow, an attorney with the SPLC, tells Mother Jones.

The suit was filed on behalf of 11 Central American men and women who fled “horrendous violence,” requested asylum in the United States, and were sent to Mexico, where they now fear for their lives. Six nonprofit legal aid groups focused on immigration, including Al Otro Lado and the Tahirih Justice Center, are also plaintiffs in the case.

One of the plaintiffs is “Ian Doe,” a former police officer from Honduras who worked undercover to combat drug trafficking and is seeking asylum in the United States, according to the suit, “after his identity was revealed to the drug traffickers and they came after him. Ian narrowly escaped with his life and after he left the country, the drug traffickers killed his brother, believing that he was Ian.” He does not feel safe in Mexico because drug trafficking organizations in Central America extend all the way north, and he is afraid of Mexican police after he was stopped multiple times by officers and required to pay a bribe of $1,500 pesos to avoid being arrested and taken to jail.

The “Remain in Mexico” policy, officially called “Migrant Protection Protocols,” is part of a much bigger effort by the Trump administration to deter and crack down on migration from Central America. The first person impacted was a Honduran asylum-seeker, who was returned to Tijuana on January 28. Then, US officials said that about 20 people would be returned to Mexico every day. Mexican government officials called the policy a “unilateral move” by the United States.

After these men and women, and sometimes families, ask for asylum in the United States, they are given a “notice to appear in court” by US immigration officials and then sent to some of the most dangerous border cities in Mexico. The United States, says Crow, is “providing nothing.” She adds, “Mexico is by no means a safe country, and many of the individuals who are plaintiffs had already had problems in Mexico before crossing into the US.”

Not only will the asylum-seekers be vulnerable in Mexican border towns, the suit claims they will also be deprived of a meaningful opportunity to prepare a legal case and seek asylum.

The legal aid groups involved in the case argue that their mission to provide representation to asylum-seekers is “being thwarted by the physical removal of those asylum seekers.” These organizations provide legal aid to asylum-seekers but also typically offer social services and at times mental health resources for victims of violence while they’re waiting for their case to make it through the courts—something that becomes “virtually impossible to do if they’re in Mexico,” Crow says.

For now, the migrants have to find shelter in Mexico and wait there until their court date in the United States.

When the policy was first announced, US officials said it fell under a provision that allows the government to send migrants back to the contiguous country they entered from. But the suit argues that US immigration law protects people seeking asylum from this statute, saying they shouldn’t be sent back to a country where they are at risk of prosecution or torture.