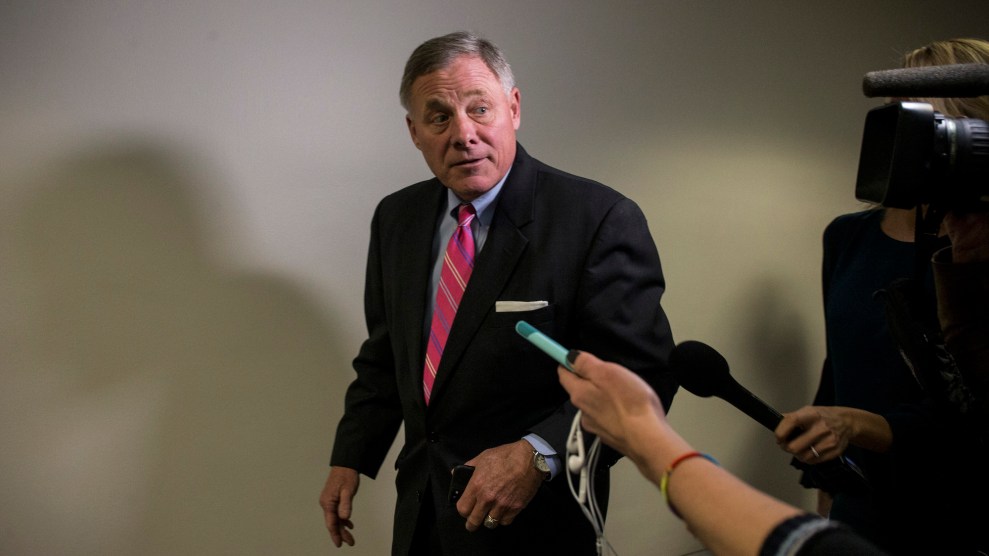 Senate intelligence committee chairman Richard Burr keeps saying his panel has found no evidence of collusion between President Donald Trump’s 2016 campaign and Russia. But that means less than it seems: The panel has yet to interview key witnesses or fully investigate interactions between Trump’s 2016 campaign chief and a Ukrainian with suspected ties to Russian intelligence.

“We don’t have anything that would suggest there was collusion by the Trump campaign and Russia,” Burr told CBS News last week. The North Carolina Republican has leaned into that claim even as proceedings in federal court in Washington have revealed perhaps the most compelling signs to date of coordination between the Trump campaign and Russia: While managing Trump’s 2016 campaign and even after his 2017 indictment, Paul Manafort secretly met with Konstantin Kilimnik, an associate the FBI believes has links to Russia’s GRU, to discuss a Moscow-backed Ukrainian “peace plan” believed to involve lifting US sanctions on Russia. At one of those meetings, on August 2, 2016, Manafort gave Kilimnik detailed Trump campaign polling data, prosecutors say.

On Wednesday, US District Court Judge Amy Berman Jackson ruled that Manafort had lied to special counsel Robert Mueller’s investigators about those contacts with Kilimnik after agreeing to cooperate with their investigation. Prosecutors say Manafort tried to cover up activity at “the heart of” the special counsel’s investigation in the hope that Trump will pardon him.

Burr, who regularly reminds reporters that he has access to sensitive intelligence they lack, might sound like he has information that discounts the significance of Manafort’s meetings with Kilimnik. But he doesn’t, according to committee sources and information the committee has made public.

The committee has never interviewed Manafort or Kilimnik about the meeting or the men’s communications about a peace plan for Ukraine. Nor has the panel spoken to Manafort’s longtime deputy, Rick Gates, who attended the August 2 sit down and is currently cooperating with Mueller’s investigation.

The intelligence committee did interview Manafort on July 25, 2017, but only after agreeing to limit its questions to the June 2016 Trump Tower meeting between Manafort, Jared Kushner, Donald Trump Jr., and a Russian emissary they believed would hand over damaging information on Hillary Clinton. Then-Senate Judiciary Committee Chairman Chuck Grassley (R-Iowa) told Mother Jones at the time that he had rejected a similar request from Manafort’s lawyers because he and other senators found it unduly restrictive.

The intelligence committee hoped to secure a more far-reaching interview with Manafort. But Mueller’s probe intensified. FBI agents raided Manafort’s Alexandria, Virginia, home the day after he spoke to the committee. He and Gates were arrested on money laundering and illegal lobbying charges in October 2017. Prior to their arrests, the committee could have subpoenaed Manafort or Gates, but it never took that step. Once they were indicted, the committee’s ability to summon them was mostly gone.

This means that the committee never questioned Manafort about his contacts with Kilimnik, the pro-Russian peace plan the men discussed, or campaign material Manafort gave to Kilimnik.

A Burr spokeswoman did not respond to questions.

And this is just one area the committee has not scrutinized; in fact, the panel has yet to interview many of the key players in the Trump-Russia scandal. That includes former national security adviser Michael Flynn, who pleaded guilty in 2017 to lying to the FBI about his communications with Russia’s ambassador regarding US sanctions on Russia; former Trump campaign foreign policy adviser George Papadopoulos, who also admitted lying to the FBI about contacts with suspected Russian agents; and Roger Stone, who was indicted last month for obstruction of justice and making false statements to the House intelligence committee. The Senate intelligence committee declined to subpoena Stone after his lawyer, in a September letter to the panel, indicated that Stone would invoke his Fifth Amendment rights if compelled to testify.

Burr has also brushed aside calls for public hearings. The senator says he prefers to conduct the inquiry behind closed doors. But Democrats on the committee and other critics say that by shunning the power to hold high-profile hearings, the committee gave up a key means to pressure witnesses to cooperate. “Congress doesn’t have the ability to lock people up on criminal charges,” says Matthew Miller, a former Senate and Justice Department aide and frequent commentator on the Trump-Russia investigations. “They do have the ability to expose wrongdoing to the public. That is their most important oversight function, so they have without a doubt sacrificed one of their most powerful weapons.”