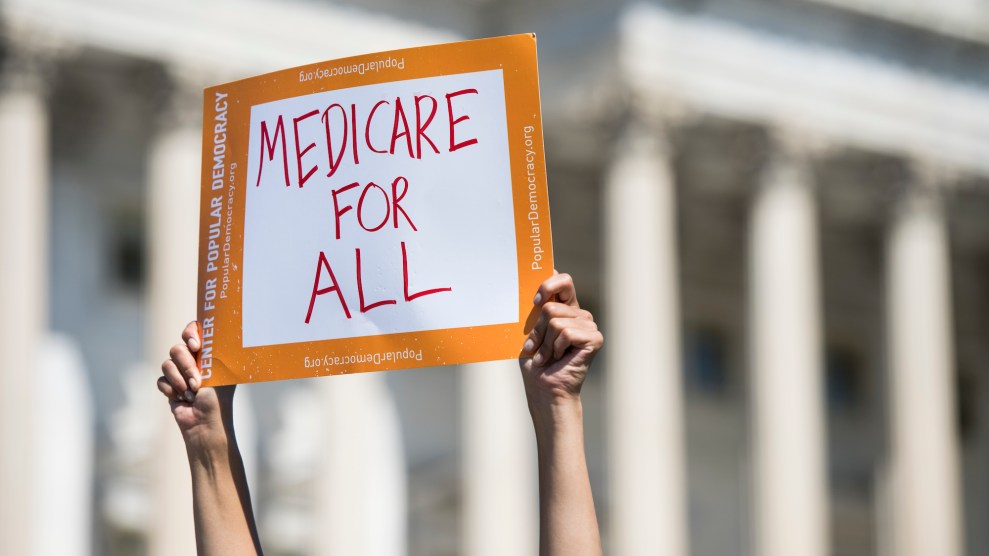 Progressive Democrats of America holds a news conference to announce the launch of a Medicare for All Caucus at the Capitol on July 19, 2018.Bill Clark/CQ Roll Call/AP Images

On Wednesday, Rep. Pramila Jayapal (D-Wash.) will introduce “The Medicare-For-All Act of 2019,” a comprehensive bill with over 100 co-sponsors that is set to become the new Democratic House’s main pitch for how a single-payer health system might work.

The bill draws inspiration from Sen. Bernie Sanders’ (I-Vt.) 2017 “Medicare For All” proposal and a House bill championed by former Rep. John Conyers (D-Mich.). But Jayapal’s plan goes much further than those past bills and includes a more robust set of benefit categories than traditional Medicare. Her bill adds vision, dental, mental health, and women’s reproductive benefits; coverage for long-term care, with a bias toward home-based care; and an elimination of all co-pays and deductibles. And this new form of Medicare would be available to everyone in the country within two years of the bill becoming law, doubling the transition speed of Sanders’ bill, which envisioned a four-year rollout. Staffers who worked on the bill say they sped up the timeframe in order to hasten people away from private insurance companies that may decrease the level of service for customers when they know they’re about to head out of business.

More than 100 Democrats have signed onto the bill—a third of whom are not members of the Congressional Progressive Caucus, the most liberal corner of the House, which Jayapal co-chairs. And unlike past single-payer proposals, Jayapal managed to recruit a bevy of outside support from liberal organizations who hadn’t backed past Medicare-for-all bills to help boost the measure, ranging from labor unions like the Service Employees International Union to Indivisible.

Jayapal’s office started working to bring in those partners at the same time she first began working on the bill months ago. She brought several progressive groups that worked on the Sanders bill, like Social Security Works and National Nurses United, along with new constituencies, like women’s and disability rights activists, who had voiced concerns about some of what the Sanders and Conyers bills had left behind.

For some of the new groups, deciding to back Jayapal’s bill was about learning from the failures of other attempts to fix the health care system. Randi Weingarten, the president of the American Federation of Teachers, one of the country’s largest teachers’ unions, says AFT signed on after seeing some of the failures of the Affordable Care Act. Weingarten says negotiations over health care premiums have become a highly contentious issue for AFT’s member unions, something she says played out most visibly during the teachers’ strikes in West Virginia last year.

“We went from fighting for simply quality, affordable health care to thinking about broad changes—I think that the experiment with Obamacare was key to it.”

“We went from fighting for simply quality, affordable health care to thinking about broad changes—I think that the experiment with Obamacare was key to it,” Weingarten explains. “Right now, insurance as the primary mode by which one gets health care is very important, but it doesn’t do enough to drive up quality and drive down costs. That’s why we think something like Medicare-for-all with a thoughtful transition period of time will actually work in this country.”

Bringing unions along has been something that Rep. Mark Pocan (D-Wis.), who co-chairs the Congressional Progressive Caucus with Jayapal, says was an easy sell in the current environment, in which unions have complained about the “Cadillac” tax, a part of Obamacare that taxes certain generous employer-provided health care plans at 40 percent. (Congress has delayed that tax several times, and it’s not set to go into effect until 2022.) “I’ve always said that when you look at who actually advocates in Washington for the middle class, there’s no lobbying organization, but it’s often organized labor who comes to our offices to talk about issues that affect working families, and clearly health insurance is one of those central issues,” Pocan explains.

Some of other new groups backing the bill say their interest comes because Democrats are now on the offense. Jennifer Epps-Addison, the president and co-executive director of the Center for Popular Democracy, a progressive advocacy organization, explains that the fight to save the Affordable Care Act during 2017 and the 2018 midterm elections had been her group’s chief focus over the last several years. Now, with a Democratic majority and a more progressive House, it was time to turn attention to vision-setting policy. “With the new leadership in Congress, it provided an opportunity for our members to have a voice in crafting the boldest Medicare-for-all proposal the country’s ever seen,” she says.

“With the new leadership in Congress, it provided an opportunity for our members to have a voice in crafting the boldest Medicare-for-all proposal the country’s ever seen.”

The groups aren’t all aligned on whether Jayapal’s measure is the only acceptable outcome for reforming the health system. Some who worked on the bill from the very beginning think it should be the only option on the table. “The solution has to be that when a person gets sick or hurt, they get the care they need,” says Alex Lawson, the executive director of Social Security Works, a progressive organization that worked with Jayapal’s office on the bill. “When something stinks of an effort to protect the problem, which is the private insurance industry, I think that comes across pretty loud.”

But others see this is in the broader context of the fight for universal care. AFT, for example, has also put its support behind “Medicare for America,” a bill from Reps. Rosa DeLaura (D-Conn.) and Jan Schakowsky (D-Ill.) that allows Americans to opt into Medicare but would maintain private insurance. “We’re supporting a couple of plans, because we need to be supporting measures that move us in the right direction,” Weingarten explains. “We need to see a health care system that’s a right according to human need.” (That methodology also extends to co-sponsorship: Schakowsky is also a co-sponsor of Jayapal’s bill.)

Pocan says that the tent is big enough for everyone in an environment where Democrats are still trying to get people on board with the idea of universal care. “Anything that moves us forward, we’re for,” he says. “I would vote for every single one of those bills. I just think ultimately when we can get to a Medicare-for-all bill, we’ll have the single best proposal out there.”