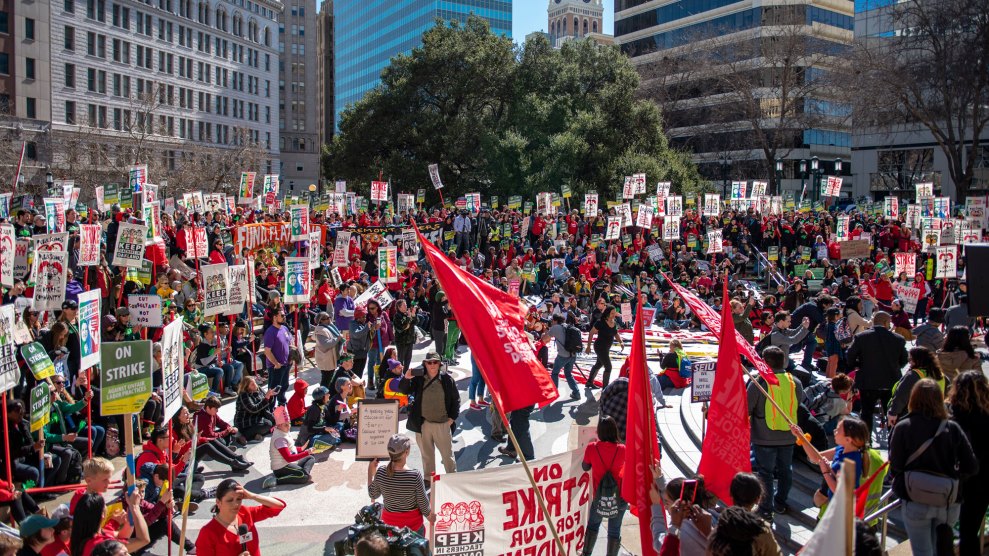 On Thursday morning, on the first day of Oakland’s teachers’ strike, a dozen or so teachers from Roots International Academy gathered around a branch-and-grass mandala in front of their school in East Oakland. Bundled up in school jackets, puffy coats, and gloves, they carried signs reading “On Strike for a Living Wage” and chanted lines like “No knowledge, no peace! No justice, no peace!” and “¡Escucha, escucha, estamos en la lucha!”

Off to the side, seventh-grader Adriana Ortega watched with a friend. In a show of solidarity with her teachers, the 13-year-old refused to cross the picket line and enter the small middle school. “It makes me sad. They should have a fair contract,” Adriana told me, holding her small pink backpack in her arms. “They’re just fighting for us, their kids.”

Her teachers joined the more than 3,000 other Oakland educators who went on strike Thursday in a call for higher pay, smaller class sizes, more charter school accountability, and more school support staffers, like nurses and counselors, for their students. The strike came after two years of negotiations between the local teachers’ union and the Oakland Unified School District, which is facing a $30 million budget deficit this year as a result of dwindling enrollment thanks to, among other factors, the rapid growth of charter schools in the city. The strike also comes on the heels of a similar work stoppage in Los Angeles, where teachers in the country’s second-largest school district demanded and won a 6 percent pay raise, more funding for support staffers, and intentions to reduce class sizes across the district over time.

In Oakland, district officials have already signaled to the California Legislature that it will need help from the state to come close to meeting the teachers’ demands. On Wednesday, a group of Oakland principals lobbied in Sacramento for more funding, noting in an op-ed, “Only by increasing funding can teachers in Oakland and across the state truly realize the salaries they deserve for providing our students with the experience of a quality education.”

An independent fact-finding report released last week agreed, concluding that the state’s funding system was “complicated and flawed in a number of ways” and made it “very difficult” for district officials in Oakland and elsewhere in California to meet the teachers’ demands. Ultimately, the two sides “should be able to work together to advocate for increased state spending on public education,” wrote labor arbitrator Najeeb Khoury.

In a last-minute offer Wednesday, the district offered union members a 7 percent retroactive pay raise. The union, which has called for a 12 percent raise, rejected the offer, and on Thursday morning teachers across the city protested in front of their schools and marched to the district’s offices in downtown Oakland.

But for teachers at Roots, the first day of the strike was also a moment to challenge the district’s controversial plan to “right-size” the district. Earlier this month, Oakland’s school board announced that Roots would be closed at the end of the year, the first of up to two dozen schools it’s considering shuttering or merging to close a massive budget shortfall. (Another small middle school a couple of miles east, Elmhurst Community Prep, will merge with Alliance Academy next year; across town, in north Oakland, the district has proposed combining Kaiser Elementary and Sankofa Academy, two schools with stark racial and socioeconomic differences.)

As teachers protested Thursday morning, a few students trickled into the school here and there. Quinn Ranahan, a second-year math teacher and the union’s site representative, told me that teachers like herself couldn’t afford to live in Oakland given their current pay. Besides, her class size of 33 students was “way too big”; she didn’t want her students to spend another year trying to learn in that environment. “It’s unfair working conditions,” Ranahan says.

She saw the union’s recent call for a halt on school closures during contract negotiations as an important step given that other schools could soon be on the chopping block. “If it happens to us, then it will keep happening to everyone after us,” she said. “So we have to stop it now.”

“To me, this is a job of dignity. To see our teachers out here have to do this for a living wage, it’s dishonorable.”

Adriana agreed with Ranahan, telling me that the huge classes made it difficult for students to get “the attention we need” from teachers. But Adriana was also worried about where she’d go to school as an eighth-grader next year, particularly because she thought she might get even less attention if she were to attend a bigger school. “It’s not fair that this school is closing,” Ortega said. “I feel like [the strike] is going to help make the district understand that teachers need better pay, we need smaller class, and students need more support like nurses and counselors.”

As the morning wore on, Roots principal Geoff Vu walked out of the school in a green school jacket. He carried a container of hot tea and poured some into a cup for a small child standing along the road. Vu told me he wasn’t sure how many students would show up on Thursday morning, especially given that parents had been staging “sickouts” at the school since the school board finalized its decision.

It felt weird to be outside watching his colleagues protest, he told me. In 2010, the last time Oakland teachers went on strike for a day, Vu had been early in his teaching career at Roots. “It’s necessary. It’s unfortunate,” Vu said. “To me, this is a job of dignity. To see our teachers out here have to do this for a living wage, it’s dishonorable.