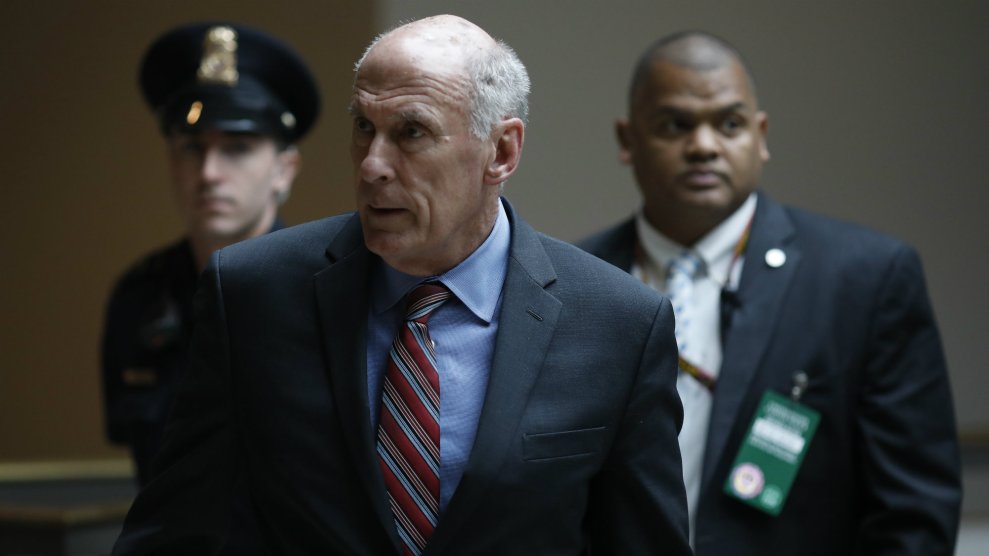 Nine days before President Donald Trump was inaugurated, he compared American intelligence officers to Nazis. Since that inauspicious start, the intelligence community has been viewed as more foe than friend by a president more inclined than most to disagree with its assessments. Caught in the middle of that tense relationship is Dan Coats, a former diplomat with decades of experience in Congress. As Trump’s director of national intelligence, Coats leads the nation’s 17 intelligence agencies and advises the president on domestic and foreign threats, which often means disagreeing with Trump.

Those disputes appear to have soured Trump on Coats. In a Washington Post story published this week, one source said the president called Coats “not loyal” and said “he’s not on the team.” Unless he manages to stick around, Coats is bound to go the way of Jeff Sessions, Rex Tillerson, James Comey, and other senior advisers who fell out of Trump’s favor.

Coats has frequently made public statements at odds with Trump’s own views. Here are some of the more notable examples of the break between Trump and his director of national intelligence:

Russia meddled in the 2016 election and targeted the 2018 midterms

Few subjects have captured Trump’s rage quite like the insinuation that his victory over Hillary Clinton in 2016 was assisted by a disinformation and cyberhacking campaign commissioned by Russian leader Vladimir Putin. The president’s skepticism of Russian malfeasance began well before his surprise victory. During a presidential debate, he dismissed the intelligence community’s determination that Russian hackers had swiped emails from the Democratic National Committee. The culprit, Trump famously said, “could be somebody sitting on their bed that weighs 400 pounds.”

As director of national intelligence, Coats has repeatedly outlined the threat of Russian election interference, often to the point of creating an awkward distance between his statements and Trump’s. During a June conference in Normandy, France, he said Russia “conducted an unprecedented influence campaign to interfere in the US electoral and political process” that did not end in 2016. Coats emphasized that intelligence officials “continue to see Russian targeting of American society in ways that could affect our midterm elections.” While Coats’ remarks were coordinated with the White House, according to a source who spoke with Mother Jones, they presented a much different reality than the one Trump has promoted on Twitter and on the campaign trail.

Trump poured fuel on that conflict the following month after meeting with Putin in Helsinki. During a press conference, Trump appeared to lend Putin’s “extremely strong and powerful” denial of Russian interference more weight than the intelligence community’s harsh assessment of Moscow’s culpability. “I have President Putin, he just said it’s not Russia,” Trump told reporters. “I will say this: I don’t see any reason why it would be.” In a defiant letter released after the summit, Coats said, “We have been clear in our assessments of Russian meddling in the 2016 election and their ongoing, pervasive efforts to undermine our democracy, and we will continue to provide unvarnished and objective intelligence in support of our national security.”

The following days brought more unwelcome news for Coats, this time in the form of a surprise announcement that the White House had invited Putin to Washington for a meeting. On stage in Aspen for an interview with NBC’s Andrea Mitchell, Coats could barely mask his bewilderment. “Okaaaay,” he said. “That’s going to be special.” He later apologized for an “admittedly awkward response.”

With a Twitter decree last June, Trump suddenly dismissed the threat his predecessors had built up as one of the country’s preeminent national security issues. “Everybody can now feel much safer than the day I took office,” he said. “There is no longer a Nuclear Threat from North Korea.”

Coats and the intelligence community were not quite as rosy about the prospects of denuclearization under leader Kim Jong Un. “We continue to observe activity inconsistent with full denuclearization,” Coats noted in a threat assessment submitted to Congress last month. “North Korea has for years underscored its commitment to nuclear arms, including through an order in 2018 to mass-produce weapons.”

Iran did not cheat on the nuclear deal

Trump has never been a fan of the Iran nuclear deal negotiated by former President Barack Obama. During the campaign, he called it “disastrous” and promised to craft a deal that was “100 times better.” Part of Trump’s criticism of the deal stems from his belief that Iran is continuing to build a nuclear weapon, a view shared by Israeli Prime Minister Benjamin Netanyahu. The only problem, according to Coats’ threat assessment, is that this view is not true. “We do not believe Iran is currently undertaking activities we judge necessary to produce a nuclear device,” Coats’ report stated.

Climate change is not a “hoax”

Trump’s skeptical view of man-made climate change is no secret. He’s called global warming an “expensive hoax” and repeatedly dismissed evidence—even when compiled by his own government—that planet-warming emissions are rising. Under Coats’ leadership, the intelligence community has adopted the consensus view of most scientists in acknowledging the threats stemming from climate change, including the possibility of rising sea levels devastating coastal cities and a warmer Arctic creating more competition with Russia and China.

“Global environmental and ecological degradation, as well as climate change, are likely to fuel competition for resources, economic distress, and social discontent through 2019 and beyond,” Coats’ recent threat assessment states.

Rather than soften his own view, Trump reportedly moved to further isolate the intelligence community with the creation of a “Presidential Committee on Climate Security.” The panel, which the Washington Post said Trump is likely to establish with an executive order, would be led by William Happer, a National Security Council official who believes that “doubling or tripling CO2 in Earth’s atmosphere will be a major benefit to life on Earth.” This niche view is disputed by the majority of scientists.