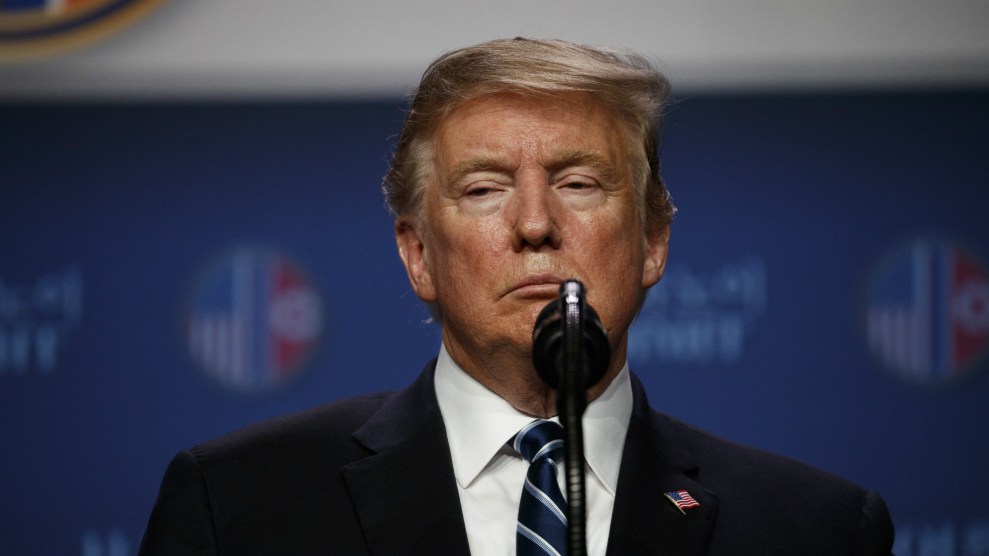 In 2016, under fire for his refusal to release his tax returns, President Donald Trump contended that an ongoing audit by the Internal Revenue Service prevented him from disclosing these financial records, as every presidential contender had done since 1980. To back up his position, Trump’s campaign released a letter from his tax attorneys, Sheri Dillon and William Nelson, certifying that Trump had been under “continuous audit” since 2002.

But on Wednesday, during his explosive testimony before the House oversight committee, Michael Cohen, Trump’s onetime personal lawyer and fixer, said he believed no such audit existed. Cohen testified that during the campaign, he had requested proof that Trump was under audit in order to brief the press, but never received any. Cohen said his discussions with Trump led him to believe that Trump’s audit story was a ruse and that Trump was in fact worried that releasing his tax returns would invite IRS scrutiny.

“He has said to me…that what he didn’t want was to have an entire group of think tanks that are tax experts run through his tax return and start ripping it to pieces, and then he’ll end up in an audit and he’ll ultimately have taxable consequences, penalties, and so on,” Cohen told the committee.

Cohen’s remarks, if true, call into question the letter Dillon and Nelson penned.

White House press secretary Sarah Huckabee Sanders said the White House would not comment on any part of Cohen’s testimony beyond a statement she issued Wednesday calling it “laughable that anyone would take a convicted liar like Cohen at his word, and pathetic to see him given yet another opportunity to spread his lies.”

Dillon, a partner at the law firm Morgan, Lewis & Bockius, did not return a request for comment. But she may soon be grilled about her assertion that Trump was under audit, among other claims she has made about Trump financial matters. The House oversight committee on Wednesday requested an interview with Dillon. The House Ways and Means Committee, which has the right to request Trump’s tax returns, may also be interested in Dillon’s response to Cohen’s revelation.

Dillon may now have to be more forthcoming about key matters that Trump has long kept hidden from the public.

When Trump submitted his 2017 disclosure to the Office of Government Ethics, he failed to divulge one particular liability: the money he owed Cohen for paying off adult film star Stormy Daniels, a scandal that had recently come to light. According to Cummings’ letter, the committee possesses documents showing that when OGE officials asked about the omission, Trump’s lawyers initially denied that the president owed money to Cohen. Later, after Trump lawyer Rudy Giuliani publicly talked about this debt, Cummings noted in his letter, Dillon told the OGE that Trump’s payments to Cohen were for legal work, not the repayment of a debt.

Dillon was also the lawyer who came up with a plan that would supposedly insulate Trump when he entered the White House from the myriad conflicts of interest posed by his businesses. At a press conference held shortly before his inauguration, Trump introduced Dillon to talk about the issue. Piled behind them were stacks of paper that Trump and his lawyer pointed to as evidence of the legal steps Trump had taken to separate himself from his business interests. But based on what Dillon said at the press conference, Trump would retain complete ownership of his businesses and the ability to withdraw money from them at any time. In other words, his massive conflicts of interest remained. When reporters tried to get a closer look at the paperwork on display, they were shooed away by transition staff, leading some to speculate that the pages were blank.

Faced with a Democratic-controlled Congress armed with subpoena power, Dillon may now have to be more forthcoming about key matters that Trump has long kept hidden from the public.