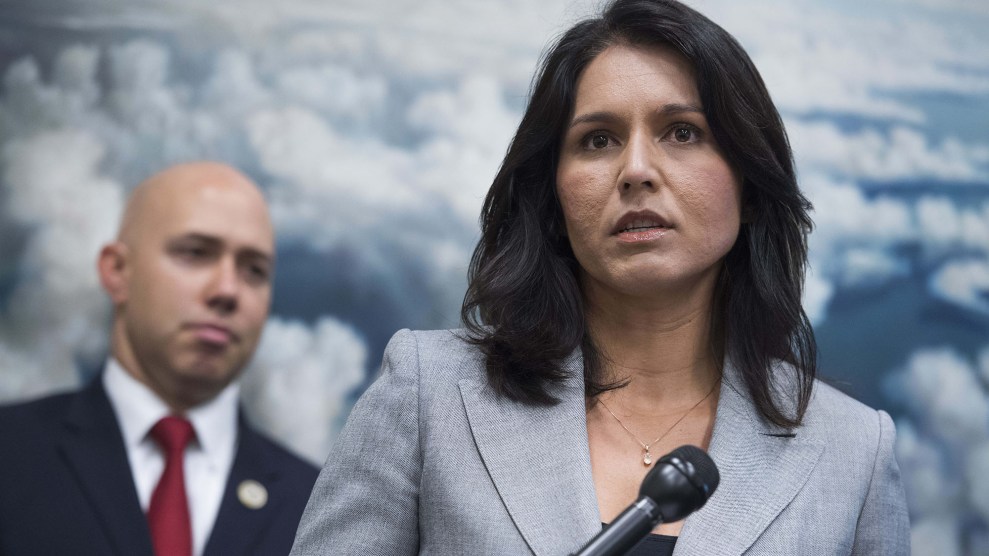 Rep. Tulsi Gabbard (D-Hawaii) will run for president, she announced Friday, entering a soon-to-be-crowded field of Democrats hoping to unseat Donald Trump. But Gabbard will stand out from her competitors, not for her progressive domestic agenda, but for her support of nationalists and authoritarians abroad. At a time when members of both parties worry about the rise of autocrats, dictators, and nationalist movements around the world, Gabbard has embraced some of them.

Gabbard’s foreign policy has become a major part of her identity. Back home in Hawaii, it has prompted primary challenges, and in Washington, DC, she’s drawn attention for her support for Syria’s Bashar al-Assad and right-wing nationalists in India. In 2017, a Washington Post columnist dubbed her “Assad’s mouthpiece in Washington.” Around the same time, the Daily Beast described her as a “self-styled ‘progressive,’” raising questions about where her true political beliefs lie. As she enters the Democratic primary, the question is whether—or how—she convinces liberal voters to look past this record.

Gabbard attracted this attention, both at home and in Washington, after she made an unannounced trip to Syria to visit Assad shortly after the 2016 elections. Gabbard was accompanied on the trip by two officials of a “political party and paramilitary organization founded in Lebanon in 1932, and currently actively engaged in the Syrian civil war on the side of the Assad regime,” according to an investigation by the Daily Beast. Her office said the trip was sponsored by an Ohio-based group, but the funds came from one of the party officials who accompanied Gabbard, Bassam Khawam. Khawam, a longtime Assad ally in the United States, is an official in the Syrian Social Nationalist Party (SSNP), which has a history of domestic violence at home in Lebanon, including the assassination of the country’s first prime minister in 1951. More recently in Syria, the SSNP has sent between 6,000 and 8,000 fighters across the border, as the Daily Beast described it, “to help the Assad regime annihilate its opponents, to whom the SSNP officially refers as the ‘Jews of the interior’ and ‘an essential arm of the racist Jewish enemy.’”

Gabbard’s office described the two SSNP officials who accompanied her on the trip as “longtime peace advocates.” The trip became a PR nightmare, and she agreed to pay back the costs. Shortly after her visit, Gabbard defended Assad against evidence that he was behind a chemical weapons attack on his own people in the spring of 2017.

Gabbard has drawn attention for her support for Syria’s Bashar al-Assad and right-wing nationalists in India.

Her work on behalf of Assad is not the only foreign connection that could get in the way of Gabbard’s higher political ambitions. Gabbard is the first Hindu member of Congress, and she has ties to American Hindus who support nationalist causes in India. According to the Intercept, Gabbard has embraced American supporters of Indian Prime Minister Narendra Modi, and they have embraced her as a pro-Modi force in Congress. Modi, a nationalist politician, has a history of fostering violence against religious minorities. In 2002, an outbreak of violence resulted in the deaths of more than 1,000 Muslims in the state where he was chief minister.

In December 2013, Gabbard opposed a House resolution calling on Modi to protect “the rights and freedoms of religions minorities.” According to the Intercept, Gabbard later protested that “there was a lot of misinformation that surrounded the event in 2002.”

An Iraq War veteran, Gabbard quickly became a rising progressive star after her election to Congress in 2012. She was named vice chair of the Democratic National Committee, only to resign in 2016 when she endorsed Bernie Sanders for president, boosting her popularity among his supporters. This past November, she had the support of Democratic-allied groups, from the AFL-CIO to Planned Parenthood, in her reelection campaign. She was also supported by Our Revolution, a group started by Sanders’ supporters after the 2016 elections, and easily won her contest.

The fault lines between Gabbard and most of her party began to emerge years ago. In 2015, she was among a minority contingent of Democrats who joined a Republican bill to restrict refugees coming to the United States from Syria and Iraq. She embraced the term “radical Islam” and, alongside Republicans, attacked former President Barack Obama and Hillary Clinton for not using it, even though many see it as a way to demonize Muslims.

After the 2016 election, Gabbard met with President-elect Trump, who was reportedly considering her for several administration posts. The two aligned on some key foreign policy goals. Gabbard said at the time that she used the meeting to discuss her legislation to end what she described as “our country’s illegal war to overthrow the Syrian government.” Her name was missing from a letter from 169 House Democrats around that time condemning Steve Bannon’s White House appointment.

Now that she’s running for president, it will be impossible for Gabbard to avoid questions about her foreign policy record, in interviews and on debate stages later this year—a forum she has avoided for the past four years by declining to debate primary challengers running against her in Hawaii who wanted to confront her over her foreign policy agenda.

Some progressives won’t give her time to make her case and are already looking to replace her. The national progressive group Daily Kos, for instance, has found this record reason enough not to support her. “Daily Kos is very interested in supporting a credible progressive candidate who has strong local grassroots support and wants to run for #HI02,” David Nir, the group’s political director, tweeted Saturday. “Our community has no tolerance for apologists for murderous dictators.”