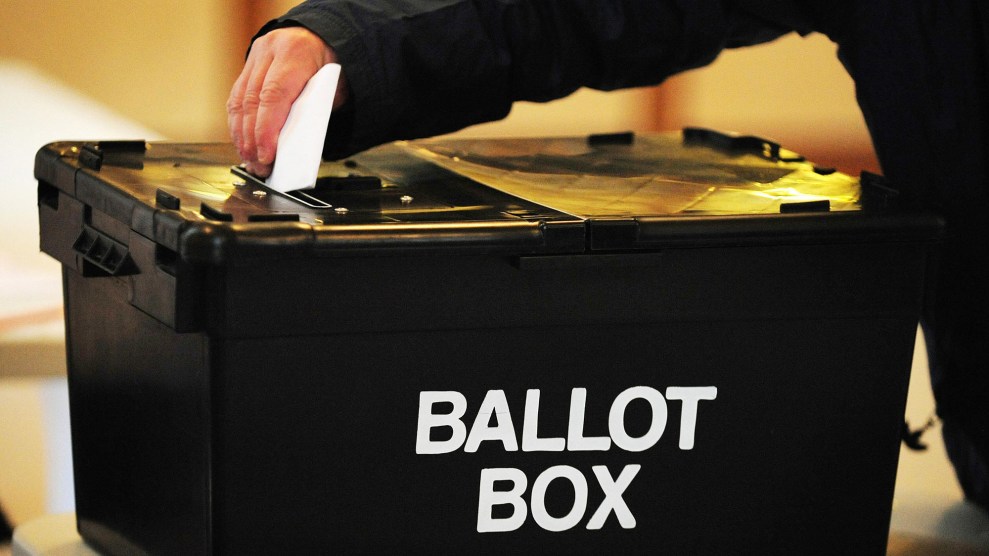 It seemed inevitable after evidence of voting irregularities appeared in the contested race in North Carolina’s 9th Congressional District: Republicans used the problems to push for tighter voting laws last month. Voting restrictions in the name of fraud prevention have been at the forefront of Donald Trump’s presidency ever since he claimed in the wake of his election that millions of fraudulent votes had been cast against him and he created a commission to investigate voter fraud. (Never mind that the commission failed to document any evidence of widespread fraud, or that North Carolina’s issues appeared to stem from impropriety on the part of the Republican candidate’s campaign, not voters.)

But raising fears of fraud in order to make it harder for people—particularly people fitting certain demographic profiles—to vote didn’t start with this administration, or even in the past 100 years. As Harvard University historian Alexander Keyssar lays out in his 2000 book, The Right to Vote: The Contested History of Democracy in the United States, the tactic dates back to the early decades of the 19th century. Throughout US history, politicians and activists ginned up stories about fraud in order to keep their opponents from the polls. “Legislative debates were sprinkled heavily with tales of ballot box stuffing, miscounts, hordes of immigrants lined up to vote as the machine instructed, men trooping from precinct to precinct to vote early and often,” he writes.

The most pervasive fraud that was actually occurring in the late 19th century was in the South, where African Americans were denied the right to vote through vigilante violence and ballot manipulation. “We are a majority here,” a black man from Georgia testified to the Senate in 1883, “but you may vote till your eyes drop out or your tongue drops out, and you can’t count your colored man in out of them boxes; there’s a hole gets in the bottom of the boxes some way and lets out our votes.” The unfolding scandal in North Carolina, where it appears African American voters were the victims, “certainly fits with the long tradition with trying to suppress the black vote in the South,” Keyssar tells Mother Jones.

In the late 19th century, white Southerners began to realize that the easiest way to disenfranchise African Americans was through legal means like poll taxes and literacy tests. Meanwhile, fear of widespread voter fraud prompted restrictions on voting around the country, often employed to hinder immigrants, minorities, and poor and working-class voters. Here’s an incomplete timeline of using the specter of fraud to deny people the vote:

1836: Pennsylvania passed its first voter registration law. The law applied only to Philadelphia, where it required assessors to go door-to-door to compile a list of eligible voters. To cast a ballot, a voter had to be on the list. “Although the proclaimed goal of the law was to reduce fraud, opponents insisted that its real intent was to reduce the participation of the poor—who were frequently not home when the assessors came by and did not have ‘big brass’ nameplates on their doors,” Keyssar writes.

1866: California passed a restrictive registration requirement aimed at quelling fears about voter fraud committed by immigrants. Democrats considered it “an act of hostility to the Democratic party.” To register, naturalized citizens had to present to the county clerk their “original, court-sealed naturalization papers,” Keyssar explains. “In the absence of such papers, an immigrant’s eligibility could be established only through the testimony of two ‘householders and legal voters’ and by residence in the state for a full year, double the normal requirement.” The deadline to register was three months before the general election.

1866-1867: New Jersey Republicans erected a series of hurdles under the pretense of fighting fraud. Everyone who wished to cast a ballot had to register in person the Thursday before each general election; anyone could challenge the credentials of a would-be registrant; and anyone not on the list on Election Day could not vote. Democrats protested that the laws discriminated against the poor, who couldn’t take time off work to register. These registration laws varied in the ensuing decades, with Democrats repealing them when in power and Republicans reinstating them upon taking control. Republicans also passed laws to close the polls at sunset, based on the assumption that illegal votes would be cast after dark. Democrats countered that these “sunset laws” blocked workers from voting.

Early 1880s: Chicago’s elite, losing power to Democratic politicians, began to advocate reforms to “preserve the purity of the ballot box,” including a burdensome registration system. At the same time, they set out to discover evidence of fraud to boost their reform agenda. They hired investigators to monitor polling locations and offered a $300 reward to anyone who helped “in the apprehension and conviction of anyone who voted illegally in Chicago in 1883.” The allegedly illegal voters the effort produced were acquitted in court.

1885: Despite a lack of evidence of fraud, Illinois enacted a new voter registration system drafted by the state’s elites. Under these reforms, voters in some cities were required to register in person on the third or fourth Tuesday before a general election. Election clerks, accompanied by the police, would then conduct a house-by-house canvass of every would-be voter and create a “suspect list” of anyone potentially registered improperly. Anyone on this suspect list would not be eligible to vote unless he appeared on the Tuesday two weeks prior to a general election with convincing evidence of his eligibility. This entire process would be repeated every four years. The Chicago elites celebrated that “the foundations for honest elections were now firmly laid.”

1911: New Jersey, in a Progressive Era effort to squash corruption, erected major hurdles to voter registration, but only in cities of more than 5,000 people. Whenever a voter moved or sat out an election, he had to re-register. Registration was available only four days per year, and the registration process required a prospective voter to list his occupation and the names of his spouse, parents, and landlord, as well as “a satisfactory description of the dwelling in which he lived,” as Keyssar describes it. Turnout plummeted, especially among African Americans and immigrants.

2010-present: Republicans who took control of state governments across the country after the 2010 elections passed a rash of restrictive voting laws as anti-fraud measures. These reforms included voter identification laws, restrictions on early voting, and requirements that people provide proof of citizenship to register. They have done little to stamp out in-person voter fraud, which is virtually nonexistent. But they do impede voters of color, the poor, the elderly, and young people from casting ballots. A federal appeals court found in 2016 that North Carolina’s voter ID requirements “target African Americans with almost surgical precision.” A federal court in Texas ruled in 2017 that the state’s voter ID law, passed under the pretense of fraud deterrence, purposefully discriminated against African Americans and Latinos.