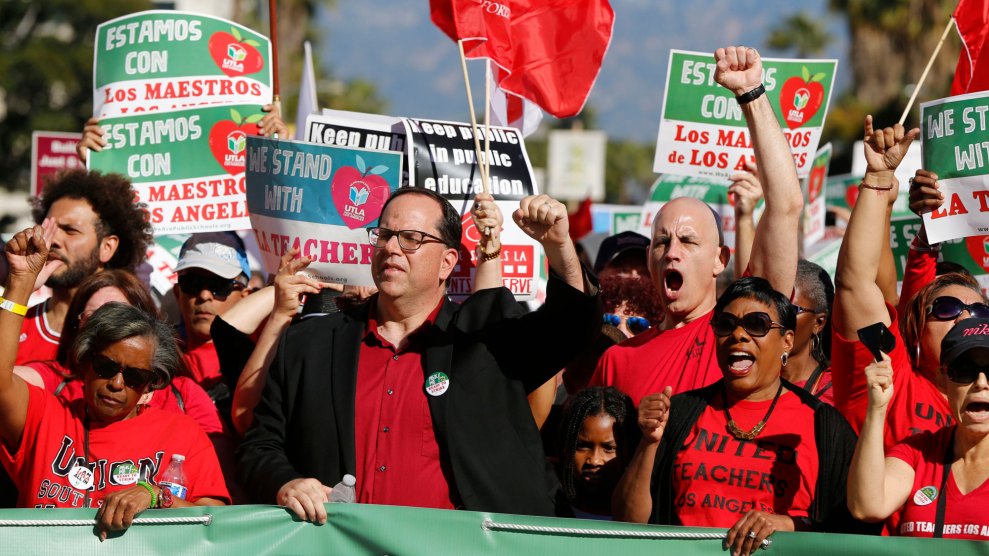 On Monday, 30,000 teachers across 900 public schools are planning to go on strike in Los Angeles following a monthslong standoff over large class sizes and inadequate support and pay for teachers, counselors, and librarians.

Contract negotiations between the Los Angeles Unified School District and the city’s teachers union have stalled. Teachers have called for higher pay and more resources, and their union has cried foul over what it views as a disinvestment in public schools. The district has offered to raise teachers’ salaries by 6 percent over two years and include $105 million toward hiring new staff, the Los Angeles Times reported. But that hasn’t been enough for the union.

“I have taught in Compton and at Crenshaw High School. I have been in my own children’s classrooms. And I have visited hundreds of other schools. There is wonderful promise in the students at all of our schools,” United Teachers Los Angeles president Alex Caputo-Pearl wrote in the Times this week. “But although they are surrounded by wealth, students across the city are not getting what they deserve.”

Less than a year after the so-called #RedforEd movement erupted, with teachers in six predominantly red states demanding higher pay and more school funding, a strike in Los Angeles would leave more than 600,000 students—many of whom rely on schools for food and medical assistance—and their parents in a period of uncertainty. The Times reported that the district plans to keep schools open during the strike and has enlisted hundreds of substitutes and 2,000 district workers with teaching credentials to offer instruction, though it’s unclear what that instruction will look like.

Teachers were originally poised to strike as early as Thursday, but on Wednesday the union postponed the strike date until next week while it awaits a judge’s ruling on whether the union gave the district enough notice that its members wouldn’t work under the district’s contract.

I spoke to Pedro Noguera, an education professor at the University of California-Los Angeles and director of UCLA’s Center for the Transformation of Schools, about why the strike is happening and how it will resonate with teachers elsewhere.

Mother Jones: What are the factors that have led up to this moment?

Pedro Noguera: A lot of the issues are primarily political. Los Angeles has more charter schools than any district in the country. The proliferation of charters has contributed to a loss of enrollment and deterioration of the district’s financial situation. Pro-charter billionaires have been backing school board candidates, so now they have a majority on the board, and they just selected a pro-charter superintendent. So the combination is perceived as a real threat to the union and its future. On top of that, LA has schools with some of the largest class sizes in the country, and the teachers’ cost of living has not kept pace with what it takes to live in Los Angeles.

“LA has schools with some of the largest class sizes in the country, and the teachers’ cost of living has not kept pace with what it takes to live in Los Angeles.”

MJ: Given that the district is willing to meet the teachers’ salary demands, why would teachers still want to walk out?

PN: The union still wants to make its political point. It hasn’t been able to meet some of the other demands around class size and supports for schools, which it just can’t meet because it doesn’t have the money. For the union, they still want to make a point here, and so there’s an impasse and there’s going to be a strike.

MJ: Why hasn’t the district been able to meet the demands over smaller class sizes so far?

PN: The district is running a structural deficit. It spends more money than it takes in every year: almost half a billion dollars. To lower class sizes, they would have to hire a bunch more teachers. So to hire teachers and raise salaries and put counselors and nurses in schools—they don’t have the money for that.

PN: The big difference was that those were red states that had intentionally underfunded public education, and finally the teachers had enough. California has intentionally underfunded education, but it’s a blue state, so the politics are different because the teachers union is very influential in California. They have a lot of clout. But despite that, there’s been systematic underfunding of public education in California for many years.

“The teachers union is very influential in California. They have a lot of clout. But despite that, there’s been systematic underfunding of public education in California for many years.”

MJ: What does that look like in Los Angeles?

PN: It means Los Angeles has some of the largest class sizes in the country. We have class sizes in high schools close to 40 students. These are not, by any means, good conditions for teaching and learning.

MJ: How would a strike in Los Angeles resonate with teachers in other major cities? Take Oakland, for example.

PN: This is where it gets difficult. If the teachers are striking to defend public education, the strike will also weaken public education. Lost days mean lost income for teachers. The district could lose more students. The same could happen in Oakland, which is also facing a huge deficit. A strike might be a good way to draw attention to the problem, but it may not be the best way to solve it.

MJ: The district is still going to keep schools open and has hired substitutes to fill in the gap during those days. How would a strike affect students in Los Angeles?

PN: There won’t be much learning going on because the teachers won’t be there and subs won’t be prepared. How chaotic will the schools be with picket lines out front? We’ll see how many parents will send their children. We’ll also see how long parents will be willing to support a strike. The challenge for the teachers union is going to be: How long will they stay out? Many teachers can’t afford to not receive a paycheck for very long. How you bring closure to something like this is going to be a huge challenge.

“I don’t think it’s going to result in getting the teachers what they want.”

MJ: How do you anticipate this playing out?

PN: I don’t think it’s going to result in getting the teachers what they want. A lot of what’s on the table is what they are going to get because the money is not there to get more than that. The district is offering to meet demands for salaries, and they started to move on the class size situation. It will allow them to have flexed muscles and send the message that “We’re still here. You’d better take us seriously.” But that’s largely symbolic. It doesn’t really change the situation facing the district.

If you’re a teacher in LA planning to strike, or a parent with children who will be affected by the strike, tell us about your experiences with LA schools in the form below. We may reach out to you or use your response for a follow-up story.