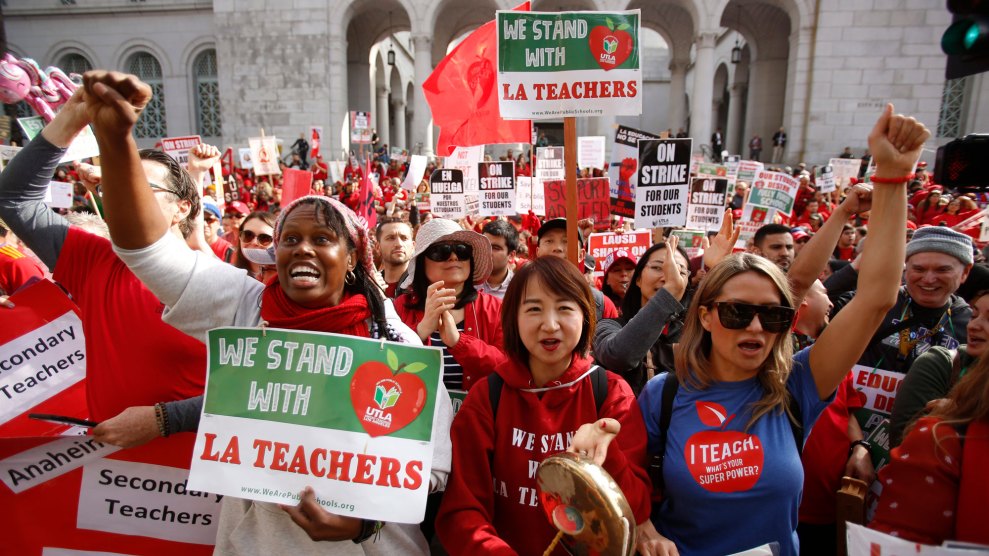 Teachers picketed and rallied Friday as a strike against the giant Los Angeles Unified School District entered its fifth day with a new round of contract negotiations underway. Damian Dovarganes/AP

Tens of thousands of teachers in Los Angeles have been on strike for the past week. Negotiators for the school district and the teachers’ union have been locked in marathon negotiation sessions throughout the weekend to settle the ongoing dispute over large class sizes, money for support staff, and teacher pay.  Throughout the week leading up to Martin Luther King Day, teachers picketed for hours outside their schools, ending with a rally outside City Hall on Friday. Here’s what I heard from several teachers about the issues that concern them most and why they continue to strike.

Alma Rosa Vidaña, who participated in the city’s last teachers’ strike in 1989 and teaches special education at Panorama High School, on what brought her to the picket line: “The same reasons that brought us out in 1989—class size, pay. Unfortunately, this time we also have the charter school issue threatening us. They are siphoning funds. They are taking students. They don’t all accept English learners and special ed students.”

What about when you have a school psychologist at a school? How about three? Here’s Alejandra Gurrola, who moves betweeen three elementary schools in San Fernando Valley and works with 2000+ students. pic.twitter.com/ZXpMcSwqfd

Mack Scott, a special education instructor for 52nd Street Elementary School and a Los Angeles teacher for more than 30 years, on what brought him to the rally on Friday: “Solidarity. I have friends who work in middle school and high school and hearing stories about teaching AP courses and having 50 students for an AP course. That’s unreasonable to expect the teachers and students to be in those kinds of conditions.”

Anthony Williams, a parent engagement coordinator for LAUSD and former teacher: “Everybody thinks this is about salary increases.” It’s more about resource support and class size reductions, repeats that nurses often work one day a week.

Elise Mejia, who teaches English to adults and is a mother of three: “We’re afraid. We can’t compete with charter schools. They have small class sizes, and the district hasn’t met that yet. We’re losing our kids to charter schools because they’re not putting their money into public schools anymore. They’re letting all these kids go. The public schools, we’re getting left behind, and with the conditions that we’re facing, how can you have 38 math students in 32 chairs?”

Elisa Mejia doubles as a part-time teacher and a mother of three. Her son and daughter here transferred from Sunrise Elementary to Arroyo Seco Museum Science because Sunrise had a nurse on duty once a week. New school has a nurse 3 days. pic.twitter.com/u8eKnqH5lN

Stephen Cordova, who taught at a magnet school in Marina del Rey for more than 20 years before he started at Dorsey High School in August, on what his high school needs: “I would say counselors. These kid are are suffering traumas in their lives, and who do they have to talk to? These kids need therapists. They need counselors to talk to them. This one girl told me one day, ‘Oh, sorry, I’m in a bad mood, Mr. Cordova. My dad just got sentenced to life in prison for murder.’ How do you keep track of every kid that’s going through stuff? I don’t know if it’s an option.”

Stephen Cordova, who taught at a magnet school for two decades before he came to Dorsey this year, told me one of Dorsey’s biggest resource issues: Lack of counselors for students dealing with trauma. “If resources were here, Dorsey would be a much more attractive school.”

Darryl McKellar, who has been teaching in Los Angeles schools for two decades: “The system is broken…When a charter school is given carte blanche to the elementary and middle school elite, the end result is high schools suffer…So it’s broken. This is a moment in history where we hit the reset button and if that happens, the sky’s the limit. LAUSD, you owe us.”

Darryl McKeller, who has been teaching in the LA for 20 years, echoed what Cordova said about the lack of counselors, especially for a school with a high foster youth, homeless population. “Without proper counseling, students are at a disservice.” pic.twitter.com/sr9HOlRaNw