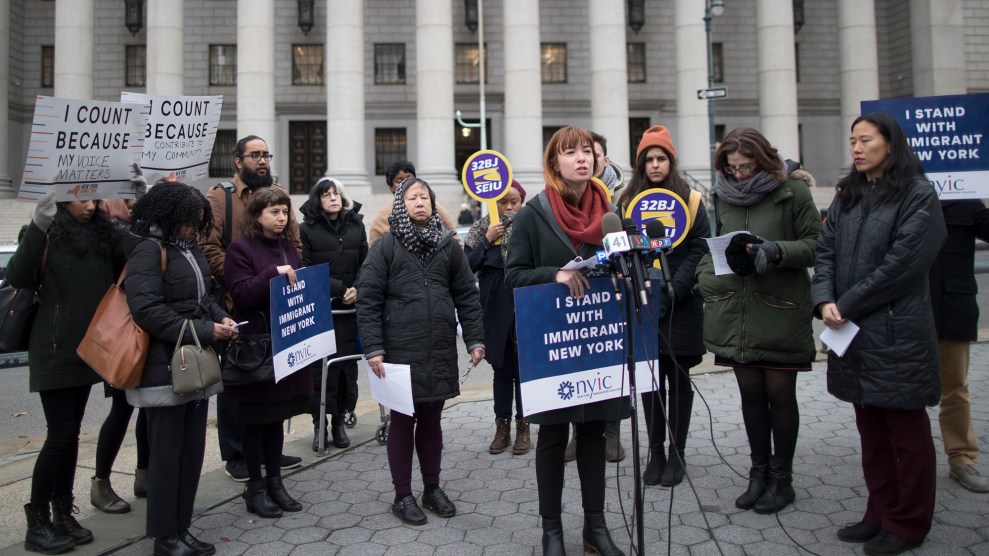 A federal judge struck down a controversial question about US citizenship that the Trump administration added to the 2020 census, ruling that “adding a citizenship question to the census will result in a significant reduction in self-response rates among noncitizen and Hispanic households.”

New York and 16 other states, along with the American Civil Liberties Union and immigrant rights groups, challenged the question, saying it would depress response rates from immigrants, imperil the accuracy of the census, and shift political power to areas with fewer immigrants. Judge Jesse Furman of the Southern District of New York agreed with the plaintiffs, finding on Tuesday that “hundreds of thousands—if not millions—of people will go uncounted in the census if the citizenship question is included…That undercount, in turn, will translate into a loss of political power and funds, among other harms, for various Plaintiffs.”

The census determines how $675 billion in federal funding is allocated, how much representation states receive, and how political districts are drawn. “Given the stakes, the interest in an accurate count is immense,” Furman wrote in his 277-page opinion. “Even small deviations from an accurate count can have major implications for states, localities, and the people who live in them—indeed, for the country as a whole.”

The decision is likely to be appealed to the Supreme Court, which could reinstate the question in time for it to be included on the 2020 census.

The administration announced in March 2017 that it was adding the citizenship question, which hasn’t been asked on the census since 1950. Commerce Secretary Wilbur Ross, who oversees the Census Bureau, approved the question. Furman ruled that Ross’ decision violated the Administrative Procedure Act of 1946, which prohibits federal agencies from acting in a manner that is arbitrary and capricious. In a biting opinion, Furman ruled that Ross “alternately ignored, cherry-picked, or badly misconstrued the evidence in the record before him,” “acted irrationally,” and “failed to justify significant departures from past policies and practices—a veritable smorgasbord of classic, clear-cut APA violations.”

Ross said he approved the question because he said the Justice Department needed it for “more effective enforcement” of the Voting Rights Act. He subsequently testified before Congress that the DOJ had “initiated” the request. However, evidence released during the trial repeatedly undercut the Trump administration’s stated rationale for the question, as Mother Jones reported from the three-week trial in New York City:

John Abowd, the top scientist for the Census Bureau, testified that the bureau opposed adding the question. Abowd wrote in a January memo to bureau leadership that the citizenship question would be “very costly, harms the quality of the census count, and would use substantially less accurate citizenship status data than are available from administrative sources.” He said Sessions used his “political influence” to prevent Justice Department staff from meeting with the bureau to hear their concerns.

The evidence in the case shows that the upper echelons of the White House pressured Ross and the Commerce Department to reinstate the citizenship question on the census, apparently because of a desire to reduce the influence of immigrant communities, as Mother Jones has previously reported:

One of the senior administration officials who lobbied Ross to add the question was former White House chief strategist Steve Bannon. In July 2017, Kansas Secretary of State Kris Kobach—at the time the vice chair of President Donald Trump’s now-defunct Election Integrity Commission—wrote to Ross “at the direction of Steve Bannon” and said it was “essential” that the citizenship question be added to the census. Kobach wrote that the absence of a citizenship question “leads to the problem that aliens who do not actually ‘reside’ in the United States are still counted for congressional apportionment purposes.”

Kobach’s correspondence with Ross contradicted the Trump administration’s stated rationale for the question—Kobach never mentioned the Voting Rights Act in his letter—and suggested the question was added to reduce the political clout of areas with many immigrants and boost Republicans. The Justice Department said in court that Kobach, Bannon, and Attorney General Jeff Sessions, who have all advocated aggressive crackdowns on immigration, were among those involved in pushing for the citizenship question.

Ross had “no apparent interest in promoting more robust enforcement of the VRA,” Furman found. “While the Court is unable to determine—based on the existing record, at least—what Secretary Ross’s real reasons for adding the citizenship question were, it does find, by a preponderance of the evidence, that promoting enforcement of the VRA was not his real reason for the decision. Instead, the Court finds that the VRA was a post hoc rationale for a decision that Secretary had already made for other reasons.”

If noncitizens do not respond to the census, which Furman said was likely to happen if the citizenship question remained, areas with a high concentration of immigrants, like New York, California, and Texas, will receive less federal funding and fewer political seats. “The Court finds by a preponderance of the evidence that California residents face a certainly impending loss of representation in the House of Representatives,” Furman wrote. “Similarly, Texas, Arizona, Florida, New York, and Illinois face a substantial risk of losing a seat.”

Six major lawsuits, including the one from New York and 16 other states, are currently challenging the citizenship question. The Supreme Court has scheduled oral arguments in February to decide whether Ross must sit for a deposition under oath and what kind of evidence can be considered in these cases. Furman vacated his September decision that Ross must sit for a deposition under oath—a decision the Supreme Court had already blocked—but it’s possible the Supreme Court could instead hear an expedited appeal of Furman’s decision striking down the citizenship question and reinstate the question in time for the 2020 census.

For now, this is sure to be one of the most important legal decisions of the new year, one that will go a long way toward deciding what the 2020 census—and by extension, the future of American politics—will look like over the next decade.