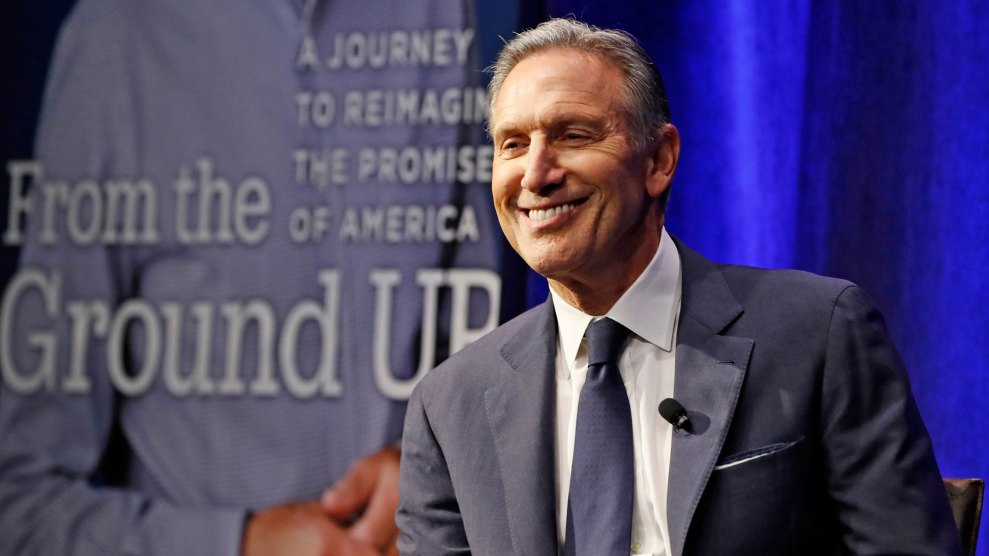 When in the course of human events it becomes necessary for one people to dissolve the political bands which have connected them with another, a decent respect to the opinions of mankind requires that they should declare the causes which impel them to the separation. Unfortunately, no one seems to have told former Starbucks CEO Howard Schultz.

Schultz, a lifelong Democrat and a billionaire who contends that the party has strayed too far left, has declared that he may enter the presidential race as a “centrist independent.” But at an event Monday night to promote his new memoir at a Barnes & Noble in Manhattan, he failed to convincingly answer the most important question: Why?

The fourth floor of the bookstore, which includes a Starbucks, was an unusual place for what amounted to a campaign kickoff—the first public event Schultz held since teasing his bid on CBS’s 60 Minutes. (By contrast, more than 20,000 people filled an outdoor plaza in Oakland on Sunday to see Sen. Kamala Harris launch her presidential campaign.) Schultz had no sooner begun to answer his first question from moderator Andrew Ross Sorkin, the CNBC host and New York Times columnist, when he was interrupted by a voice in the back of the room.

“Don’t help elect Trump, you egotistical billionaire asshole!” a bearded man in an Adidas track jacket shouted. “Go back to getting ratioed on Twitter!”

Schultz started to respond, but the man kept going: “Go back to Davos with the other billionaire elites who think they know how to run the world!”

It was probably the first time in history that a potential presidential contender has been heckled about the dreaded Twitter ratio—and perhaps also the first time one has been heckled about Davos—but it was also a useful distillation of the tension between what Schultz says America needs and what he’s offering. When Schultz eventually regained the floor, he said he was running to put a stop to President Donald Trump’s agenda. But there is already a process by which a lifelong Democrat with center-left policy positions can run for president: It’s called the Democratic primary. It is the responsibility of the person reinventing the wheel to explain why what he is doing is necessary.

Schultz was heckled again later on by a protester shouting, “Health care is a human right!” (Schultz opposes Medicare-for-all.) But for the most part, “the silent majority” he said would make him president was just that—silent. The audience listened politely; some people, it seemed, really were just there to hear about the book. Perhaps the loudest ovation of the night came when Sorkin asked Schultz about a statement from former New York City Mayor Michael Bloomberg, who implored the ex-Starbucks CEO not to run as an independent because it would hurt Democrats’ chances of beating Trump.

“Nobody wants to see Donald Trump fired and leave office more than me,” Schultz insisted.

The buzzwords flew this way and that as he laid out the case for his candidacy. “For the first time since George Washington,” Schultz said, “an independent person can ignite a national movement to say, ‘It’s time for us to come together, to send a powerful, strong, robust message to everyone they see that we want change, real change, we want to reimagine the system, we want to disrupt it.'” He was tired of “the toxicity of both parties.”

Schultz’s case rests in part on a misreading of basic data. “Most people don’t realize that about 42 percent of the electorate identifies itself as an independent—30 percent are registered and another 12 percent affiliate themselves as an independent,” Schultz said. “Those 42 percent have never had a legitimate choice to vote for what they believe in.” Schultz would like “independent” to mean “moderate,” like him—someone occupying an ideological space between the bases of the two parties. But the most famous independent in the United States is Bernie Sanders, and the political science is quite clear: Most self-described independents are staunch partisans who just aren’t open about it.

The prospective candidate is right about one thing—there is a vocal faction of Democrats who have begun to speak more aggressively against concentrated wealth, and the policy prescriptions they offer would come down hard on billionaires like himself. Asked about New York Rep. Alexandria Ocasio-Cortez’s recent comment that the existence of billionaires is immoral and a reflection of a failed economic system, Schultz expressed frustration.

“It’s so un-American to think that way,” he said. For all his rhetorical nods to unity and civility, Schultz has a habit of dismissing people who don’t agree with him as “un-American.” On Tuesday, he suggested that Harris’ proposal to get rid of private health insurance was “un-American” and tweeted that opponents of his third-party bid were, too. (Yes, of course, that tweet got ratioed.)

Schultz’s grand theory of politics today is that Republicans are wrong, but Democrats are also wrong. Nowhere is this distinction more circular than on border policy. “This is the most simple problem to solve,” Schultz said, referring to one of the most perpetually volatile issues in national politics.

Pressed by Sorkin, Schultz said he believes that Republicans are wrong for supporting a wall but that Democrats should not be calling to abolish Immigration and Customs Enforcement (which doesn’t patrol the border). His solution to the budget impasse now being negotiated in Congress is to fund border security measures that don’t include a wall or fencing, while offering citizenship for some formerly undocumented residents. If this compromise sounds familiar, it’s because it has been the Democratic governing consensus now for years—including during the recent 35-day shutdown that Schultz blamed on “politics.”

As for what he would do about the border in place of a wall, Schultz said he would assemble “tech companies” and ask them to “solve the problem of border security.”

But as he outlined his views and recounted his personal experiences, the contrast between the image Schultz is cultivating for himself as an outside-the-box disruptor and what he appears to believe seemed quite large. Schultz is not a stupid man. He made $3.4 billion by convincing people that coffee is ice cream. But for someone promising to disrupt a centuries-old political system, he isn’t calling for anything particularly radical—nothing like the “new kind of government” he alluded to, or even the sweeping institutional critiques that have driven third-party candidates (such as Theodore Roosevelt or Eugene V. Debs) in the past. Quite the opposite—he just wants the status quo to be a bit more polite.

Asked on Tuesday morning what his “big idea” is for America, Schultz responded that it would be to “unite the country.”

“To unite the country, for us to come together, to do everything we can to realize that the promise of America is for everyone.”

Schultz told the crowd at Barnes & Noble that he likes the Affordable Care Act and wants to expand it; he’d like to negotiate lower drug prices with pharmaceutical companies. He thinks corporate taxes are too low and inequality is a serious problem, but that free college, universal health care, and a federal jobs guarantee are also bad because they cost too much. He’s worried about the debt and less worried about, though generally aware of the existence of, the ongoing crisis of food insecurity.

Schultz is, in another words, an extremely generic moderate Democrat in 2019, not so different from the kinds of Democrats who have won the party’s nomination in the recent past. The only real mystery is why he thinks that makes him George Washington.