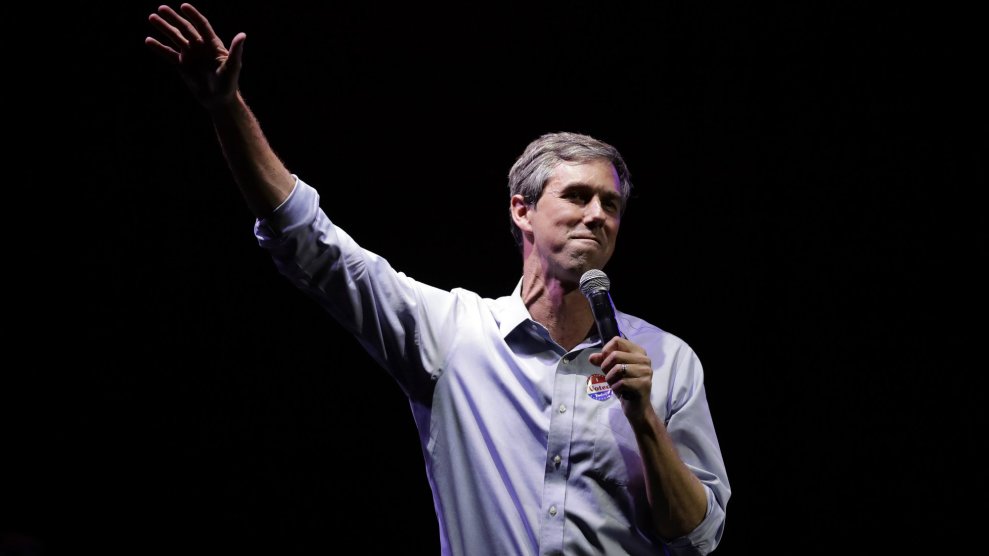 Last September, when he was a surprisingly strong challenger to Texas Republican Sen. Ted Cruz, Beto O’Rourke brought black churchgoers to their feet when he discussed Botham Jean, a black man who was killed by a white police officer in his own home. “How can we continue to lose the lives of unarmed black men in the United States of America at the hands of white police officers?” O’Rourke asked. “That is not justice. That is not us. That can—and must—change.”

Only a month before, at a town hall in Houston, a voter asked O’Rourke if he thought NFL players kneeling was disrespectful. “Nonviolently, peacefully, while the eyes of this country are watching these games,” he replied, “they take a knee to bring our attention and focus to this problem to ensure that we fix it.” Although some conservatives criticized him for siding with the NFL players, others praised him for standing with Black Lives Matter. And on a tour of the jail in Harris County, a Texas county that leads the nation in death penalty sentences, O’Rourke told the Houston Chronicle in August that he opposed capital punishment.

But O’Rourke’s rhetoric as a candidate for Senate appears to be different from at least one of his actions when he was the Democratic representative from El Paso in the House. In 2017, O’Rourke voted for a bill that would let prosecutors apply the death penalty for defendants who murder law enforcement officers—a controversial measure that was often seen as the Republican response to police brutality protests. In 2012, the BLM movement began when George Zimmerman killed unarmed 17-year-old Trayvon Martin, and it gained momentum after a spate of black deaths at the hands of police officers in 2014 and 2015. Conservative lawmakers and police unions began to counter the messages of police brutality with “blue lives matter” rhetoric. Several states even introduced bills to criminalize protesting and enhance punishments for killing a police officer, and in Congress the Thin Blue Line Act was introduced by Rep. Vern Buchanan (R-Fla.).

The Thin Blue Line Act, says Kanya Bennett, senior legislative counsel at the American Civil Liberties Union, “sends the signal that the Congress has the backs of law enforcement over the backs of other constituents, primarily constituents of color.” The measure is popular with Republicans, who have the widespread support of law enforcement and police unions. Similar bills were introduced in the House and Senate in 2015.

The measure passed the House with votes from dozens of Democrats. “By and large, [O’Rourke is] a Democratic centrist; he’s not part of the party’s left wing,” Mark Jones, a political science professor at Rice University, says. But O’Rourke’s campaign rhetoric in 2018 suggested a candidate with liberal views on criminal justice reform; for example, he advocated ending cash bail and legalizing marijuana nationwide.

O’Rourke’s communications director did not respond to a request for comment.

After his strong though unsuccessful campaign in Texas, there also has been wide speculation that O’Rourke may join a crowded Democratic field running for president in 2020. His following includes a diverse coalition of young people and even moderate Republicans. A December 2018 CNN poll placed him behind Bernie Sanders and Joe Biden in popularity. But how will voters square the politician bringing black churchgoers to their feet with the one who supported a controversial measure that many characterized as racist? “At a time when our country needs to rebuild relations between law enforcement and communities, particularly communities of color, the Thin Blue Line Act creates even more divisions,” the ACLU said in a letter opposing the bill.

“At a time when our country needs to rebuild relations between law enforcement and communities, particularly communities of color, the Thin Blue Line Act creates even more divisions.”

“Police unions push bills like Thin Blue to distract from the national discourse around police violence and black lives,” Bennett says. Every state already has laws that intensifies the punishment if a murder victim is a police officer. In O’Rourke’s home state of Texas, several inmates on death row have been convicted of murdering police officers. When the measure was finally introduced in Congress, the Thin Blue Line bill was largely symbolic since it mostly duplicated existing state laws. “There is no shortage of protections for law enforcement when crimes are committed against them,” says Bennett.

At the same time, popular support for the death penalty has been on the decline, and lethal injection drugs have become more difficult to find. As a result, the rate of executions has declined dramatically over the last two decades. The federal government, which has 61 inmates on its death row, has only executed three people since 1988, when the federal death penalty was reinstated; the last inmate to be executed by the federal government was Louis Jones Jr. in 2003.

But even if support for the death penalty is waning nationally, in Texas, politicians tread carefully when talking about law enforcement as to not be accused of being anti-police. “O’Rourke’s vote on that bill is, in some ways, a hedge against criticism,” Joshua Blank, the manager of polling and research at the Texas Politics Project, says. O’Rourke will be able to say that he can openly talk about police brutality, “but he’s not an extremist.”

This approach may work in Texas or even during a general election, but a vote for the Thin Blue Line Act could be a problem for O’Rourke in a Democratic primary. When running against Cruz, O’Rourke didn’t have to worry about attacks from his left, Jones explains. “[It’s] the type of vote that would hurt him in the Democratic Party. There will be a host of Democrats running to Beto’s left looking to destroy his image of being a progressive.”