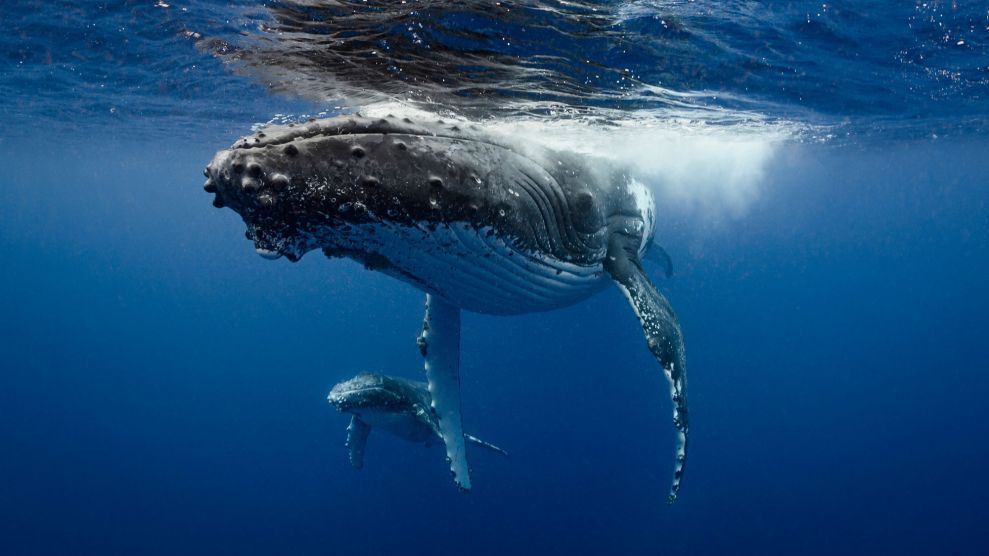 On January 10, during the third week of the ongoing government shutdown, a dead sperm whale carcass was spotted floating about a mile off the coast of Oahu, Hawaii. Tiger sharks had reportedly already discovered the carcass and were feeding on its partially dismembered body. The carcass later washed up on the beach, and a little more than 24 hours after it was first spotted, local and federal authorities towed the whale 15 miles away from the coast, where it attracted a 20-foot-long great white shark. By Thursday, the carcass had drifted back to the shallows off the coast—only to be illegally climbed on by local swimmers, who also reportedly removed its teeth. Forty-eight hours later, officials towed the whale out to sea once more.

This, of course, was a far from ideal situation, and one that was compounded by the intransigence in Washington—specifically, the removal of funding for the primary federal agency tasked with handling marine mammal crises, the National Oceanic and Atmospheric Administration.

With no one at the phones, it’s unclear how many calls are going unanswered and how many crises are going without response.

The sperm whale is an endangered species, so removing the carcass required a federal permit. Under a functioning government, that process can happen in a matter of hours. “Normally, NOAA would take the action of getting that carcass as far away from the beaches and people and tourism as possible,” Addie Haughey, associate director of government relations at Ocean Conservancy, a DC-based nonprofit ocean conservation group that works with NOAA, tells Mother Jones. “But they, because of the furloughs, were deterred in being able to do that quickly.” A NOAA spokesperson admitted in an interview with Motherboard that the process was somewhat delayed: “The situation is impacted by the partial government shutdown,” the spokesperson said the day after the carcass was discovered. “NOAA personnel will be limited in number and in the extent of work they are able to do at this time.” (Hawaii’s Department of Land and Natural Resources tells Mother Jones in an email that the response from all agencies was “as quick as possible” with the presence of the sharks, but also noted that local authorities were “taking the lead on the removal.” They declined to comment on NOAA’s response, saying, “It’s not appropriate for us to comment on a partner agency’s procedures, availability or response rate.”)

Like many government agencies focused on wildlife and the environment—including the Environmental Protection Agency, the Fish and Wildlife Service, and the National Park Service—much of NOAA’s staff is operating under severe strain. About 55 percent has been furloughed, a NOAA spokesperson tells Mother Jones.

The result is that the West Coast Stranding Network, NOAA’s marine animal response team and phone hotline for reporting injured, stranded, or dead animals, is simply not operating, and with no one at the phones, it’s unclear how many calls are going unanswered and how many crises are going without response. Making matters worse, nonprofit groups that typically operate in cooperation with NOAA to rescue or remove animals and that could help pick up the slack are also feeling the impact of the shutdown. In some cases, day-to-day operations, like acquiring federal permits necessary for such rescues and other activities, are on hold.

“It’s a little scary to think what might be on answering machines at empty desks in NOAA offices around the country in terms of people calling to try to get their permits or try to get access to resources that they need,” says Haughey. “There’s no one there to answer. There’s just nobody there.”

Beyond animal rescue and removal, having just a skeleton crew at NOAA could also negatively affect a slew of other critical activities, including ocean research, water quality monitoring, the world’s GPS modeling system, and, as my colleague Dan Spinelli writes, the country’s preparedness to deal with natural disasters.

“It’s a little scary to think what might be on answering machines at empty desks in NOAA offices around the country.”

The impact of NOAA’s shutdown is particularly great for endangered species, which, as I’ve previously reported, are having a hard enough time surviving under a normally operating government. For instance, hundreds of cold-stunned turtles, most of which are endangered, have washed up on the shores of Cape Cod in the past year, and others remain in cold northeastern waters. David Godfrey, executive director at the Sea Turtle Conservancy, tells Mother Jones that his group is on call to help rescue these sea turtles this season and transport them to Florida, where the Sea Turtle Conservancy is based, for recovery. But the shutdown may keep that from happening, he says. Before his group can move any endangered turtles across state lines, it needs government approval. “All the people that I work with, that our organization works with, at the National Fisheries Service [under NOAA] or US Fish and Wildlife Service, are all furloughed right now,” he says. “They don’t respond to email or you can’t reach them by phone.”

“If there was a cold-stun event that I needed to help out with in some way—maybe resources are needed to care for these animals, assistance to transport them down to Florida—the person who would coordinate that isn’t able to even contact me,” adds Godfrey. Thankfully, he hasn’t faced that situation yet.

Some nonprofit groups, however, were able to secure permits and funding before the shutdown, anticipating such an emergency. For example, Tony LaCasse, the media relations director at the New England Aquarium, which helps rescue marine mammals off the coast of Boston, tells Mother Jones in an email that they anticipated the logistical challenges associated with a shutdown and “secured permits for activity that was predictable for about a month out.” He said that right now, the aquarium is mostly monitoring stranded young seals and continuing the rehabilitation of several dozen endangered and threatened sea turtles stuck on Cape Cod.

Of course, if the shutdown goes on for much longer, even the nonprofit groups that were able to prepare could be in trouble. Shawn Johnson, director of veterinary science at the Marine Mammal Center, a nonprofit marine mammal rescue and rehabilitation organization, says the center did its best to anticipate the shutdown, and that so far its impact has been “annoying, but not detrimental to our work.” But, he warns, “two months from now, when we have 200 animals on site and we’re rescuing 10 animals a day, and we have endangered species that we’re dealing with, and we don’t have that government support, it’s going to be really difficult for us to be fully operational.”

“Two months from now, when we have 200 animals on site and we’re rescuing 10 animals a day, and we don’t have that government support, it’s going to be really difficult.”

Right now, Johnson says the biggest endangered-species-related issue the Marine Mammal Center would be dealing with this time of year is the rescue of a whale tangled in fishing gear, netting, or debris: “Helping [a whale] requires a large team of experts with different expertise from different organizations—from the government, from us, from partner agencies all down the coast. It takes a huge team to disentangle a whale, and that process will hopefully continue if we get a call about an entangled whale, but it’s not going to be as smooth and timely as it would be in the past.”

While the full scope of the shutdown’s impact on marine life is yet to be seen, without NOAA patrolling federal waters, we may never even fully understand it, as some injured or stranded animals could go undiscovered. “The US ocean is the responsibility of the United States federal government,” says Haughey. While some waters fall under the jurisdiction of state and local governments, “when you get out into federal waters, there are ‘no parents watching the kids.’ We’ve got these resources that we are responsible for in our exclusive zone, off our shores, that are going completely ignored right now.”