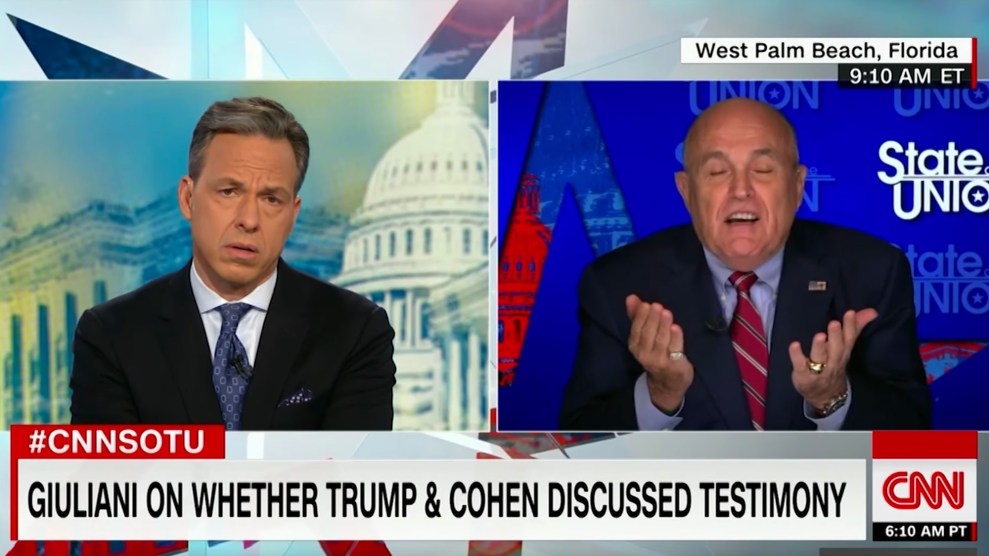 Is it just us, or do his television appearances only get more and more confusing?State of the Union/CNN

Every time Rudy Giuliani goes on television to defend his client from charges of collusion and obstruction, he appears to shift the legal goal posts to protect the person at the center of the scandal: President Donald J. Trump. Today, during his usual circuit on the Sunday morning news shows, Giuliani admitted it was possible that Trump had in fact spoken with former personal attorney Michael Cohen ahead of his testimony to Congress about Trump’s business dealings in Russia.

Speaking to CNN’s Jake Tapper on State of the Union, Giuliani characterized such an exchange as “perfectly normal,” though he wasn’t positive it had taken place. “I don’t know if it happened or didn’t happen,” he said, noting the conversation would have taken place before Giuliani came on board. “I have no knowledge that he spoke to him.”

"I don't know if it happened or if it didn't happen … I have no knowledge if he spoke to him,” Rudy Giuliani says about whether Trump and Michael Cohen discussed Cohen's congressional testimony.

Then Giuliani adds, "So what if he talked to him about it?" Via CNN pic.twitter.com/u4gbdKel8o

To add to the confusion, Giuliani also asserted that it was “not possible” that Trump had any say in what Cohen told the House and Senate intelligence committees. “The guy driving this testimony was Michael Cohen,” he said.

Giuliani’s assertion adds a layer of intrigue to the debate as to whether Trump had instructed Cohen to lie about the president’s involvement in his family-led company’s negotiations to build a Trump Tower in Moscow. On Friday, Buzzfeed reported that Trump had taken an active role in directing Cohen, according to two federal law enforcement officials; the story, which outlined alleged criminality on the part of the president, dominated Friday’s news cycle, and Democratic lawmakers argued it could represent a certain end to the Trump presidency.

But Special Counsel Robert Mueller’s team disputed the reporting and offered a rare public statement denying the claims. “BuzzFeed’s description of specific statements to the special counsel’s office, and characterization of documents and testimony obtained by this office, regarding Michael Cohen’s congressional testimony are not accurate.”

During another Sunday morning news show appearance on NBC’s Meet the Press, Giuliani also affirmed previous statements that plans to build a Trump Tower in Moscow remained active as late as November of 2016. The assertion further undermines Cohen’s claim that the project had concluded in January 2016, something Mueller characterized as an attempt to “minimize links between the Moscow Project and Individual 1″—President Trump—in an effort to curtail the Russia investigation.