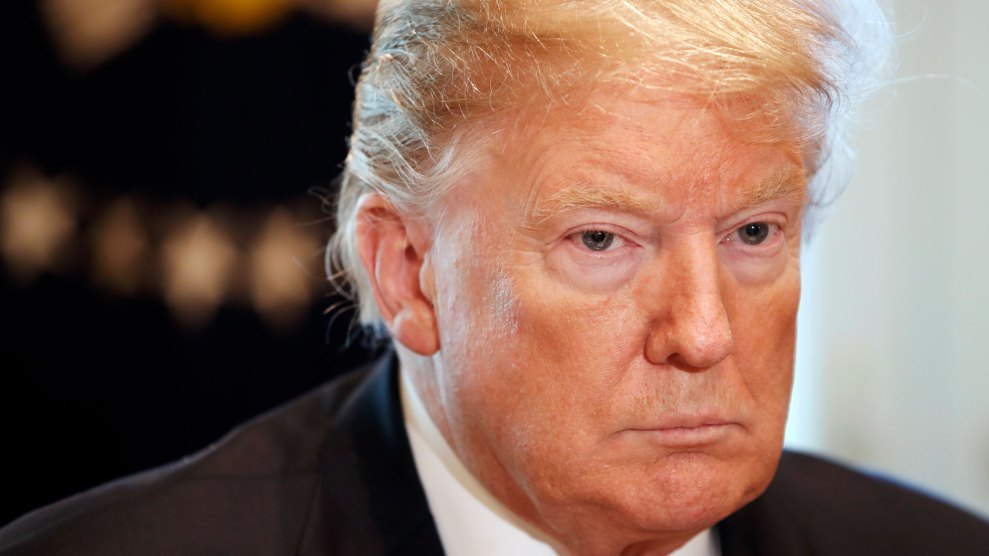 On Saturday night, President Donald Trump called into Jeanine Pirro’s show on Fox News to repeat his call for a border wall. The New York Times had just released a bombshell investigation revealing that the FBI had opened a counterintelligence investigation into the sitting president of the United States, so Pirro took the opportunity to ask Trump whether he had ever worked for Russia. “I think it’s the most insulting thing I have ever been asked,” Trump told Pirro. He then launched into a familiar screed against the “failing” Times and “lyin'” James Comey’s FBI tenure, and emphasized his sanctions against Russia. What he didn’t do, as you can see in the video and transcript below, is ever say “no.”

Here's the transcript of Trump's response to Jeanine Pirro asking him, "Are you now or have you ever worked for Russia, Mr. President?" pic.twitter.com/cDxtJUSm81

On Friday, the Times reported that shortly after Trump fired former FBI Director James Comey in May 2017, the FBI set into motion a counterintelligence inquiry into whether Trump wittingly or unwittingly worked on Russia’s behalf against American interests. The inquiry became a slice of the broader investigation led by special counsel Robert Mueller into whether Trump or his associates colluded with Russian officials to interfere in the 2016 election and whether Trump had obstructed justice when he fired Comey.

“Everyone knew there was an obstruction piece to this,” New York Times reporter Adam Goldman said, “but there was another piece to it that happened at the same time.”

In an interview with the New Yorker‘s Isaac Chotiner, Times reporter Adam Goldman, who reported on the FBI’s inquiry with his colleagues Nicholas Fandos and Michael Schmidt, helped make clear why the Times‘ findings matter. “Everyone knew there was an obstruction piece to this,” Goldman said, “but there was another piece to it that happened at the same time. It is two elements of one investigation: a criminal one and a counterintelligence one.”

According to Goldman, it was Trump’s appearance on NBC in May 2017—when the president told Lester Holt that he decided to fire Comey in part because of “this Russia thing”—that finally spurred the FBI to open an inquiry into whether the president was acting on behalf of a foreign government:

The FBI is, like, “He is telling us why he did this? The President of the United States got up on television and said, ‘I did this because of Russia.'” They are, like, “What the fuck?,” right? Once again it is the President and these self-inflicted wounds. The President said that, and forgive the FBI for taking him at his word. And that led to the opening of the investigation on Trump himself, before the appointment of the special counsel…If you are a law-enforcement official and you have evidence that perhaps suggests that the President himself may be acting as a foreign agent, either wittingly or unwittingly, isn’t it your duty to run this to the ground?

Trump took to Twitter on Saturday morning to claim the Russia investigation was a “witch hunt” and to attack the Times story and the “losers that tried to do a number on your President.” He also denied a Washington Post report that stated the president had taken “extraordinary steps” to conceal the details of his interactions with Russian President Vladimir Putin. Trump called the newspaper a “lobbyist for Amazon,” a reference to the paper’s owner, Jeff Bezos. On Saturday, Rep. Eliot Engel, a Democrat and chair of the House Foreign Affairs Committee, vowed to hold hearings into the “mysteries swirling around Trump’s bizarre relationship with Putin and his cronies, and how those dark dealings affect our national security.”

The Times‘ Goldman noted that while the Mueller investigation could be entering its final stages, the inquiry into Trump’s interactions with Russia could keep apace as new evidence surfaces.

“Even if Mueller’s people believe that, even if they are furiously writing this report, there is still a grand jury going on,” Goldman told Chotiner. “It is difficult to prognosticate. You never know what an investigation could unearth, even in the ninth inning.”