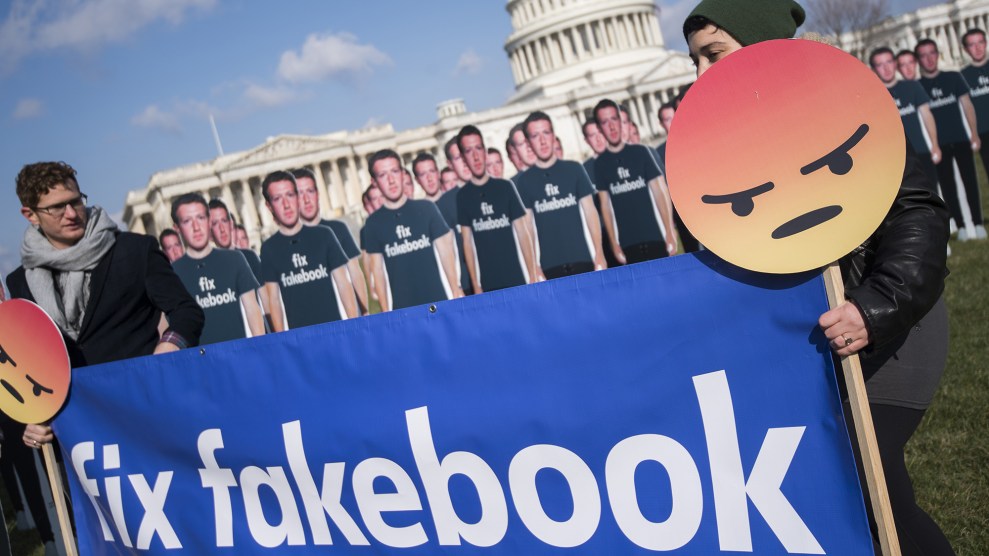 Congressional aides who participated in the calls with staff and members of the House Tech Accountability Caucus, staffers of the House Energy and Commerce Committee, and staff of the Senate commerce committee said they felt frustrated by Facebook’s lack of answers in the briefings.

“They’re very good at running out the clock on you. They get on the line, they do their intro, they talk for 15 minutes without stopping. Then you ask your question, then they spend 10 minutes answering, and before you know it, the call is over,” one aide told Mother Jones.

Four congressional sources Mother Jones spoke with, who requested anonymity to speak frankly, said Facebook often provided unsatisfying or incomplete answers when pressed by lawmakers and their staff. When Rep. Robin Kelly (D-Ill.) asked what the company was doing with users’ private messages, according to an aide on the call, Facebook responded that it doesn’t do anything users don’t allow.

“That didn’t answer the question,” the aide said.

In other instances, staffers said, Facebook didn’t provide answers on straightforward issues of data privacy, despite the calls being arranged specifically to address data privacy. In one call, Rep. Yvette Clarke (D-N.Y.) asked how the company determines whether third-party developers it shared data with have adequate data protections, but, according to an aide on the call, the company’s representatives said they would have to get back in touch with an answer.

Congressional staff describe a repeated push and pull process of trying to extract answers from Facebook in the wake of new revelations, noting that they can feel misled as Facebook discloses information not included in previous briefings.

“Facebook looks like they’re running from one crisis to the next,” one of the aides said. “They know they have to respond. The information they tell us each time appears inconsistent. It looks incomplete and inaccurate. My impression is that they’re either deliberately obfuscating, or they don’t totally understand and can’t articulate their own practices.”

“The information they tell us each time appears inconsistent.”

As an example, the aide pointed to the Times‘ revealing of Facebook data-sharing partnerships with companies like Netflix, Spotify, and Amazon, which the company had not told Congress about despite relevant requests. “The partnerships had never been identified to Congress before,” the same aide noted. “For us, it’s been a sort of slow drip of information in response to a new news story.”

Complicating the matter, congressional staffers said, is Facebook internal jargon that can make it hard to probe for details. One aide explained that while Facebook had previously disclosed to Congress many of its data partnerships with device makers like Blackberry and Samsung, it didn’t mention several data partnerships with media companies like Netflix and Spotify that the company later told Capitol Hill it categorized separately. The aide said congressional staff often don’t know what company-specific terms to use, making it harder to thoroughly question Facebook officials.

The calls came after members of the Tech Accountability Caucus—which was formed last year to address growing criticism of the sector—in an effort led by Kelly, began circulating a letter among members of Congress that was later sent to Facebook CEO Mark Zuckerberg. The letter, provided to Mother Jones, asks Zuckerberg for a dialogue with lawmakers on Facebook’s sharing of user data with outside companies and users’ ability to control how their data is passed around. Signatories included Reps. Kelly, Clarke, Daniel Lipinski (Ill.), Bonnie Watson Coleman (N.J.), Hank Johnson (Ga.), and Darren Soto (Fla.)—all Democrats.

Facebook’s responses on the calls are in line with a broader pattern of “delay, deny and deflect,” as outlined in a November Times story detailing how Facebook tried to downplay negative revelations over the past year. With each high profile misstep, the story explained, Facebook vowed to do better publicly, while privately focusing on minimizing the public relations impact of its mistakes at the expense of taking action to address the issues.

Aides hope that communication with the company will improve. Facebook has offered to give a briefing that would elucidate its data-sharing processes more thoroughly, but this has yet to happen, one staffer said, because of the holidays and shutdown.