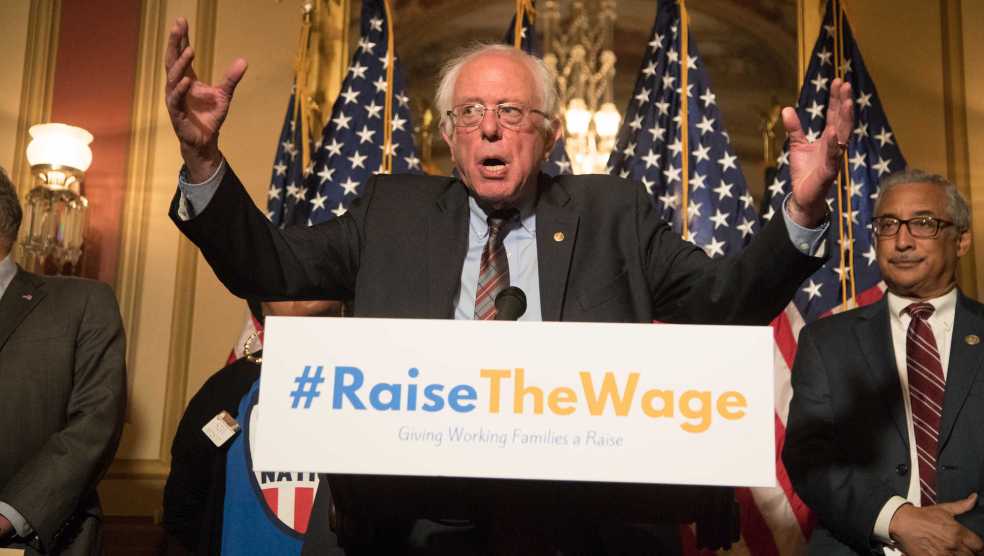 On Wednesday, a coalition of congressional Democrats introduced legislation that would raise the federal minimum wage from $7.25 to $15 an hour by 2024.

“Just a few short years ago, we were told that raising the minimum wage to $15 an hour was ‘radical,’” Sen. Bernie Sanders (I-Vt.), who sponsored the legislation in the Senate, said in a statement. “But a grassroots movement of millions of workers throughout this country refused to take ‘no’ for an answer.” He added, “The current $7.25 an hour federal minimum wage is a starvation wage.”

For the past two years, Sanders has introduced similar versions of the bill to raise the federal floor to $15. But this time, the legislation is bolstered by steadily increasing public support and the work of groups like Fight for Fifteen that have helped raise the minimum wage in cities and states across the country. While the bill has a good chance of passage in the Democrat-controlled House, it faces an uphill battle to get through the Republican-led Senate and off the president’s desk. (In November, top White House economic adviser Larry Kudlow called a federal minimum wage “a terrible idea.”)

“No person working full-time in America should be living in poverty,” said Rep. Bobby Scott (D-Va.), chairman of the House Committee on Education and Labor, in a statement. “Raising the minimum wage is not only good for workers, but it is also good for businesses and good for the economy. When we put money in the pockets of American workers, they will spend that money in their communities. This bill is a stimulus for Main Street America.”

The Raise the Wage Act would also index future increases in the minimum wage to median wage growth and abolish the subminimum tipped wage. According to research by the Economic Policy Institute, increasing the federal minimum wage to $15 an hour would translate into a raise for nearly 40 million Americans, or roughly 30 percent of the workforce.

That includes Richard Grimes, a 23-year-old Burger King worker from Hartford, Connecticut, who has worked with Fight for Fifteen for four years.

“I can’t afford basic medical insurance right now,” Grimes told Mother Jones. “With $15 an hour, I can pay my expenses; I can pay for my life.”

In the interim, local and state governments have picked up the slack. In the past decade, 29 states and 42 localities have raised the minimum wage above $7.25. As of January 1, both New York and Seattle have implemented $15 minimum wages. California and Washington, DC, are on track to reach the $15 mark in the coming years.

“I think this is a huge affirmation of the fearlessness and courage of fast-food cooks and cashiers who walked off the job six years ago calling for a $15 wage and union rights,” says Mary Kay Henry, international president of Service Employees International Union.

Labor advocates are hopeful that minimum wage increases in Arkansas and Missouri, passed through ballot initiatives in the fall, and the new progressive wave of Democrats elected to office last year will mean more labor wins in 2020.

“Bold Democratic leadership that is willing to set the national floor is going to be rewarded by voters,” Henry says. “This movement has been such a battle cry for six years…but we are not backing down until all workers win a $15 minimum wage and union rights.”