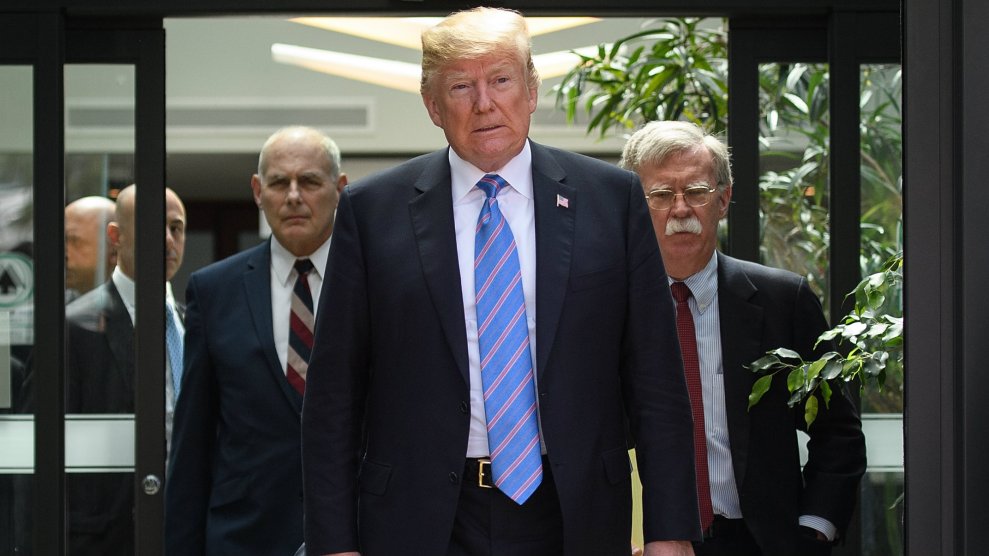 Donald Trump’s baffling decision to withdraw US forces from Syria provided critics and allies with another reason to doubt promises made by the president’s national security team—as Trump’s claim that ISIS has been “defeated” was quickly contradicted by his own aides.

In September, national security adviser John Bolton assured reporters that the US mission in Syria would continue and that the administration was committed to preventing the Islamic State from reclaiming any territory. “We’re not going to leave as long as Iranian troops are outside Iranian borders, and that includes Iranian proxies and militias,” he said. Less than three months later, his commander-in-chief pulled an about-face. In a series of Twitter posts, Trump said the fight to defeat ISIS was his “only reason for being there.” Claiming ISIS had been vanquished, he insisted that a withdrawal should be “no surprise.” (The National Security Council declined to respond on the record to Mother Jones about the policy reversal.)

Getting out of Syria was no surprise. I’ve been campaigning on it for years, and six months ago, when I very publicly wanted to do it, I agreed to stay longer. Russia, Iran, Syria & others are the local enemy of ISIS. We were doing there work. Time to come home & rebuild. #MAGA

Bolton was not the only national security official with egg on his face after the president’s surprising tweets. James Jeffrey, the State Department’s top envoy to Syria, argued as recently as Monday that the Iranian troops and their proxies leaving Syria would be a bottom-line requirement for resolving the seven-year conflict in a way consistent with American objectives. “That would be a condition of moving forward on the political process,” Jeffrey said during an Atlantic Council event in Washington. “That’s the strategy.”

A senior administration official tasked with briefing reporters Wednesday had trouble squaring Trump’s Twitter pronouncement with reality. “I will point out that ISIS is active throughout the region,” the official, who spoke to reporters on the condition of anonymity, said. “This is not something that’s going to go away, so our counterterrorism mission remains what it was.” In fact, the official noted, Islamic State fighters have conducted “attacks in the last 36 hours.” Chairman of the Joint Chiefs of Staff Gen. Joseph Dunford, Trump’s top military adviser, made that point in a recent Washington Post live event, when he said “thousands of fighters” remain in Syria.

His observation aligns with independent reports of the Islamic State’s waning but still potent influence in the region. An assessment from the Defense Department’s inspector general in November determined that the group controls only 1 percent of the territory it once commanded in Syria, but still counts between 20,000 and 30,000 fighters in its ranks across Syria and Iraq. Despite the substantial loss of its physical territory, the group’s general security and finance operations remain operational, a UN Security Council report noted in July. “The collective discipline of ISIL is intact,” the report stated.

If the announcement was not haphazard enough, Trump also apparently neglected to give his national security team a warning that the announcement was coming. The White House official who briefed reporters could not provide a timeline of when or how many of the 2,000 American ground forces would be departing. “It’s not that I’m not telling you; it’s that I don’t know, quite frankly,” the official said. After initially referring comment back to the White House, the Pentagon issued several brief public statements—none of which successfully aligned the president’s new position with his advisers’ longstanding pronouncements.

“At this time, we continue to work by, with and through our partners in the region,” spokesperson Col. Robert Manning said in a statement. Later on Wednesday, details emerged from the Pentagon that a full withdrawal had been ordered within 30 days, against the objections of several key Republican lawmakers and Defense Secretary James Mattis. Dana White, the Pentagon’s chief spokesperson, flatly said in a statement, “The campaign against ISIS is not over. We have started the process of returning U.S. troops home from Syria as we transition to the next phase of the campaign. For force protection and operational security reasons we will not provide further details.”

As some of the president’s closest allies in Congress railed against his decision, at least one person was effusive in his praise of Trump. “Donald’s right, and I agree with him,” Russian President Vladimir Putin told reporters Thursday at his annual end-of-the-year press conference.