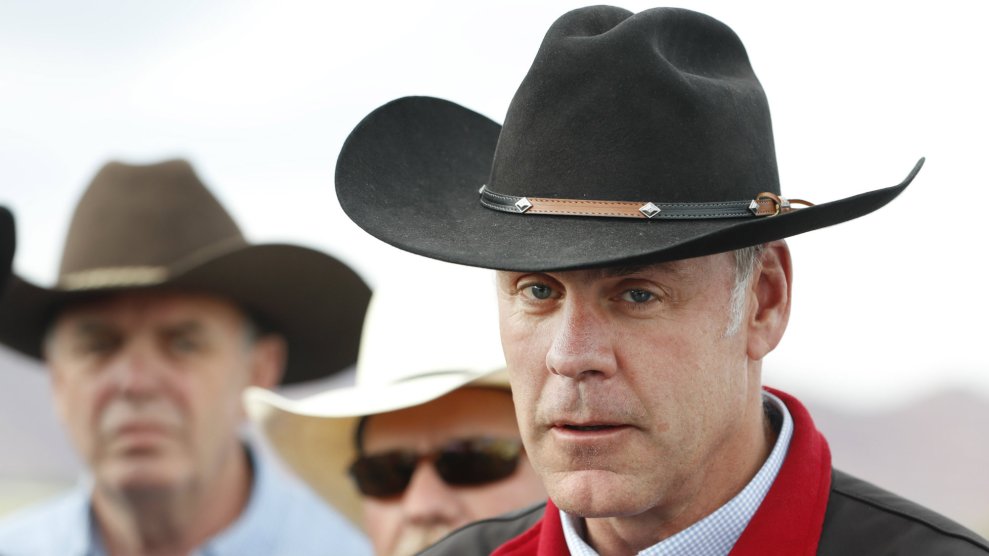 President Donald Trump announced Saturday morning that Ryan Zinke—who, as Interior secretary, oversees nearly one-fifth of all land in the United States—will leave his post at the end of the year. Trump said he will nominate a new secretary in the next week, though Zinke will likely be replaced in an acting capacity by David Bernhardt, the current deputy secretary.

Secretary of the Interior @RyanZinke will be leaving the Administration at the end of the year after having served for a period of almost two years. Ryan has accomplished much during his tenure and I want to thank him for his service to our Nation…….

…….The Trump Administration will be announcing the new Secretary of the Interior next week.

During his 22-month tenure as head of the department, Zinke adopted a cozy relationship with oil and gas interests that unnerved swaths of the agency’s more than 70,000 federal employees and helped spark at least a dozen federal investigations into his conduct. Like former Environmental Protection Agency Administrator Scott Pruitt, Zinke displayed an abiding personal loyalty to Trump coupled with a distrust of the department’s career staffers. Last September, he told members of a trade group stocked with oil industry executives that 30 percent of his “crew” were not “loyal to the flag.”

Zinke, who spent 23 years as a Navy SEAL before turning to politics, went on to centralize power at Interior among a small group of loyal advisers—many of them with ties to industries that regularly have business before the department—and commissioned Bernhardt, a longtime oil lobbyist, to run day-to-day operations. Under his watch, the department rolled back regulations aimed at limiting methane pollution and weakened the landmark Endangered Species Act. Zinke, who once called himself an “unabashedly Teddy Roosevelt Republican,” displayed an affinity for conservation earlier in his political career but careened sharply toward befriending the type of industry leaders who have regularly challenged Interior’s stewardship mission.

In July, the department’s inspector general opened an investigation into whether a land deal involving Zinke’s foundation and the chairman of oil services giant Halliburton constituted a conflict of interest. The project would have been near land owned by Zinke’s family foundation in his hometown of Whitefish, Montana, and produced a “potential financial benefit” for Zinke and his wife by increasing the value of their land, CNN reported. Last month, the IG’s office referred an unspecified inquiry to the Justice Department for a possible criminal investigation. It was not immediately clear if the DOJ was looking into the land deal or one of Zinke’s other much-scrutinized moves, such as letting his wife use government vehicles without a clear justification. Zinke denied wrongdoing in both cases, but the Washington Post reported earlier this month that Trump had become increasingly concerned about the allegations against his Interior secretary.

In a statement Saturday afternoon, Zinke said he stepped down because he could not “justify spending thousands of dollars defending myself and my family against false allegations.”

I love working for the President and am incredibly proud of all the good work we’ve accomplished together. However, after 30 years of public service, I cannot justify spending thousands of dollars defending myself and my family against false allegations. Full statement attached. pic.twitter.com/gwo75SA6bM

Upon taking over at Interior, Zinke sidelined career employees with experience working on Obama-era priorities like climate change and wildlife conservation in favor of political appointees with close ties to Zinke, experience in former Republican administrations, or ties to the oil and gas industry. Indur Goklany, a longtime department staffer who once argued that rising levels of carbon dioxide emissions could be a “good thing,” became an influential voice for aligning Interior’s climate change work with the skeptical stance taken by the Trump White House. In one unprecedented decision, Zinke ordered that all federal grants exceeding $50,000 be routed through an office run by a former high school football teammate. The review dramatically slowed down more than $5.5 billion in funding to typical recipients like the Climate Adaptation Science Centers.

Zinke’s well-known love of hunting also drew ire from conservationists. Despite not convening a single meeting with the National Park Service advisory board, Zinke established an “International Wildlife Conservation Council” and stocked it with hunters, gun industry types, and a reality TV host. He successfully urged Trump—himself no fan of hunters—to repeal President Barack Obama’s ban on importing elephant trophies from two African countries and eased rules on extreme hunting practices in Alaska that critics have called inhumane.

Zinke is the latest high-profile departure to rattle a presidential administration that has already cycled through four national security advisers and five communication directors. Two months ago, Ambassador to the United Nations Nikki Haley announced her departure, sparking some rumors that Zinke might be nominated as her replacement. That didn’t happen, but Zinke is leaving Interior anyway. In his absence, the department is expected to undergo a transition familiar to employees of the EPA: a high-flying director turning over the reins to an under-the-radar, ex-lobbyist deputy with much more knowledge of the department. As Rebecca Leber explained in her recent profile of Bernhardt:

Bernhardt is the perfect No. 2 to a highly visible No. 1. Zinke is the folksy charmer; Bernhardt is the strictly-business lawyer. Zinke is the relative outsider, an opportunist, and a politician; Interior watchdogs say Bernhardt is the ultimate DC swamp creature. Zinke is relatively new to Interior; Bernhardt, who spent eight years at the department earlier in his career, knows the ins and outs of its labyrinthine bureaucracy. And while Zinke has been mired in scandals and faces at least six active ethics investigations—including inspector general inquiries into possible Hatch Act lobbying violations and a Halliburton land deal in his hometown of Whitefish, Montana—Bernhardt has been largely invisible. Much like Andrew Wheeler, the technocrat who succeeded Scott Pruitt after his rocky stint atop the Environmental Protection Agency, Bernhardt could seamlessly take command should Zinke succumb to ethics challenges or, as some speculate, exit to run to be Montana’s governor in 2020.

Bernhardt’s understanding of the department’s workings and the allies he’s installed in key political posts enable him to steer its complex network of decentralized offices while leaving few fingerprints. His calendars often have little detail in them; the environmental group Western Values Project has noted how few of his emails turn up in their frequent Freedom of Information Act requests to the Interior. “Kind of amazing that he can do anything without leaving a paper trail behind him,” said Aaron Weiss, media director of Center for Western Priorities, another conservation group.

“Bernhardt knows where all the skeletons are and the strings to pull,” Obama-era career Interior official Joel Clement told me. Unlike Zinke, whose well-cultivated cowboy persona is “all hat, no cattle,” Clement says, “the real work is being done by Bernhardt.”