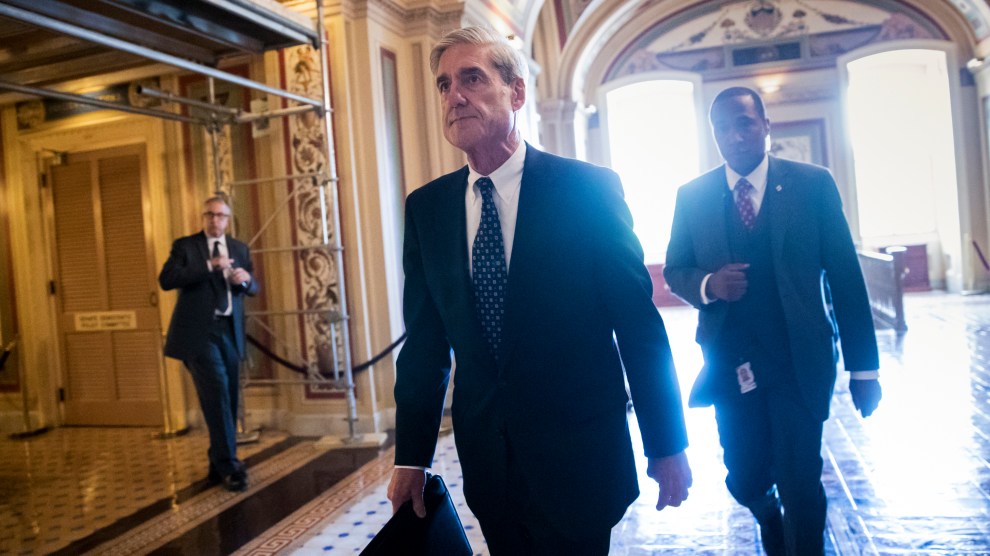 “The time that he can get away with lying to the American people all the time and evading accountability is coming to an end.”

That was one of several pointed remarks on Sunday from Democratic Rep. Jerry Nadler, the incoming chairman of the House Judiciary Committee, as he spoke about Donald Trump and the latest revelations from special counsel Robert Mueller’s investigation. In a plea deal made public on Thursday, the president’s former personal attorney Michael Cohen admitted to lying to Congress about the extent and duration of his boss’ efforts to build a Trump Tower in Moscow during the 2016 presidential campaign. “The fact that [Trump] was lying to the American people about doing business in Russia and that the Kremlin knew he was lying gave the Kremlin a hold over him,” Nadler said on NBC’s Meet the Press. “One question we have now is, does the Kremlin still have a hold over him because of other lies that they know about?”

Additional developments around the latest Cohen plea deal look ominous for Trump, and not only because Cohen reportedly has spent a whopping 70 hours talking to investigators. In a sentencing memo filed in court late Friday, Cohen’s attorneys said he has voluntarily cooperated with the New York attorney general’s office on “state court action in which the NYAG has sued the Donald J. Trump Foundation and certain individual defendants, including Donald J. Trump. He also provided the NYAG with documents concerning a separate open inquiry.” The nature of that separate inquiry is unclear. Cohen has also cooperated “on an expedited basis” with New York tax authorities, according to his attorneys.

Trump Jr. told the US Senate he was essentially unaware of Cohen’s communications with the Kremlin about the Trump Tower Moscow deal—but investigators reportedly have emails showing otherwise.

Trump reignited talk of presidential pardons this week around Paul Manafort’s case, but that constitutional power would not be applicable if Trump or his associates were potentially charged with crimes by the state of New York.

Meanwhile, reporting from the Wall Street Journal late this week included some bad news for Donald Trump Jr., whose testimony to congressional investigators has raised questions about whether the president’s eldest son and leader of the Trump Organization committed perjury. Trump Jr. told the US Senate he was essentially unaware of Cohen’s communications with the Kremlin about the Trump Tower Moscow deal—but Cohen has now admitted he lied to Congress in part to conceal his discussions with Trump family members about the Trump Tower project. Those discussions include written communications, according to the Journal, which involve Trump Jr. as well as Ivanka Trump:

Investigators obtained emails about the project from late 2015 and January 2016, according to people familiar with the matter, in which Mr. Cohen communicated with or copied Mr. Trump’s son, Donald Trump Jr., and his daughter, Ivanka Trump, both of whom were executives at Trump Organization. Ms. Trump recommended an architect, the people said. She left the company after the election to advise her father at the White House.

The president’s week of escalating rage about Mueller and recent news accounts of his particularly foul mood suggest that Trump grasps how Mueller is bearing down on him and his inner circle. As Garrett Graff wrote persuasively in Wired earlier in the week, Mueller’s endgame may now be coming into view. The special counsel has in effect already been publishing an iterative “Mueller report,” Graff noted, to the tune of nearly 300 pages thus far of vividly detailed court filings.

There is more to come soon: By December 7, Mueller’s team is scheduled to disclose details in a sentencing document on the alleged “crimes and lies” that blew up Manafort’s own plea deal, which may point to Manafort having coordinated with the Trump White House to impede Mueller’s work. And Trump’s former national security adviser Michael Flynn is finally scheduled to be sentenced on December 18; the nature of his cooperation with the special counsel since he admitted a year ago to lying to the FBI remains virtually unknown to the public.

Perhaps only Mueller—and maybe President Trump himself—knows how this all ends. But from the accelerating special counsel’s investigation to the imminent swearing in of a new Democratic House majority with subpoena power, the American public will soon know more of the story.