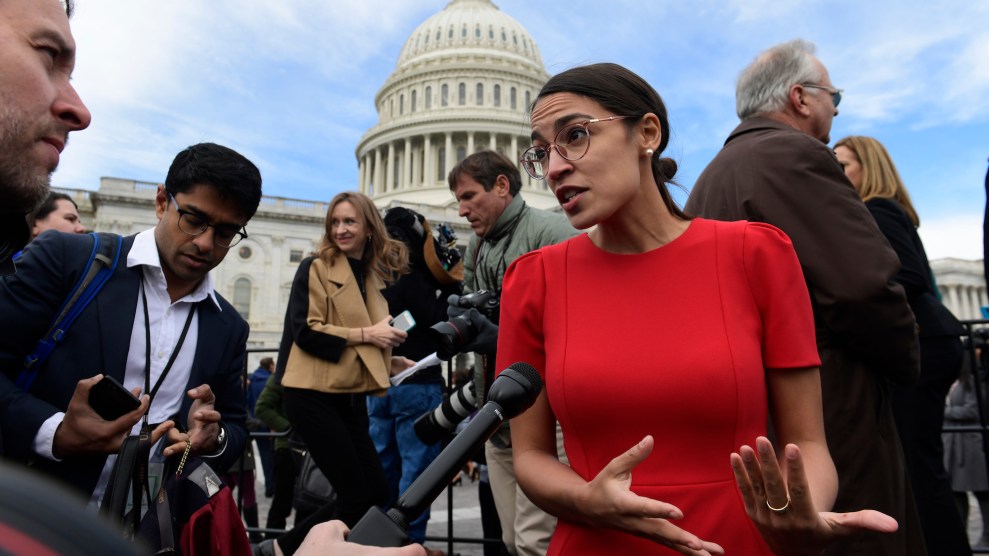 Rep.-elect Alexandria Ocasio-Cortez (D-N.Y.) has spent the past few weeks wrangling support for the Green New Deal, an ambitious resolution that aims to reorient the nation’s economy around green energy and jobs while simultaneously cutting US carbon emissions. She secured the support of Rep. Jim McGovern (D-Mass.), the incoming chairman of the influential House Rules Committee, on Monday, and on Tuesday morning, the Green New Deal took another huge leap forward when Reps. Pramila Jayapal (D-Wash.) and Mark Pocan (D-Wisc.), the co-chairs of the Congressional Progressive Caucus, added their names to the legislation. The move opens the door for a significant portion of their 90-plus-member caucus to also jump on board.

Such widespread support wasn’t always such a sure thing. When Ocasio-Cortez joined members of the Sunrise Movement—a grassroots environmental group that has been calling for congressional climate action—to demand Democrats back her Green New Deal last month, support among incumbent House Democrats was scant. Though many of them lauded Ocasio-Cortez’s bold call to action, they raised concerns that the deal’s proposal to establish a select committee on the green future would step on the toes of climate-focused committees, like Energy and Commerce, that have their own legislative and oversight priorities for the issue.

But momentum started to build, and as of today, the Green New Deal has 31 supporters, 12 of whom signed on this week. How it came together reveals how the CPC, which has vowed to exercise influence through its increased ranks in Congress, may strategically use its new power.

The key to assuaging the incumbent members’ concerns was tweaking the proposal so that the select committee can lay out a vision in service of its carbon-cutting mission, but keep the authority of actual lawmaking with the existing committees. In other words: Commit to a bold vision, while maintaining a certain level of deference to congressional procedure and precedent.

That change, Jayapal and Pocan tell Mother Jones, emerged from a collaboration between CPC leaders, Ocasio-Cortez, and the Sunrise Movement. Jayapal says she was eager to sign onto Ocasio-Cortez’s plan; some of her constituents were frustrated by her initial unwillingness to get behind it after it rapidly gained support from progressives, thanks in part to Ocasio-Cortez’s massive social media following. But when Jayapal first encountered the Green New Deal, she had the same concerns as her colleagues with regard to the legislative authority and the select committee. “There are a lot of people in our caucus who have introduced legislation, who have been working on this and want to be a part of championing it,” Jayapal said. “And so the question is, just how do we give them all a place to stand?”

She also worried about the proposal’s timeline, which seemed to call for a rapid transformation of the economy in a tight 20-year timeframe. “We have labor partners who were like, ‘Where does job transition fit into this? How do we really deal with workers who are going to lose their jobs?'” Jayapal explains.

This model for how the New Green Deal is accumulating support—through a collaboration between an energetic new elected official, outside activist support, and incumbent savvy—is something Jayapal says the CPC will likely lean on again as it tries to advance its progressive agenda next year. “[Ocasio-Cortez] has the most unbelievable following and can make stuff happen really quickly,” Jayapal says. “To me, I think about it as different talents that people bring.”

Jayapal and Pocan tell Mother Jones they expect a few more of their Democratic colleagues to sign on this week, as the Sunrise Movement continues to pressure Democratic leaders to commit to the plan before they leave Washington for the holidays. Pelosi, herself a vocal climate defender, committed to creating the select committee before the November midterm elections.* Politico reports that the likely speaker is in talks with incoming House committee chairmen as to how the new panel fits into the existing committee structure.

Correction: An earlier version of this article misstated Pelosi’s stance on creating a select committee on climate change.