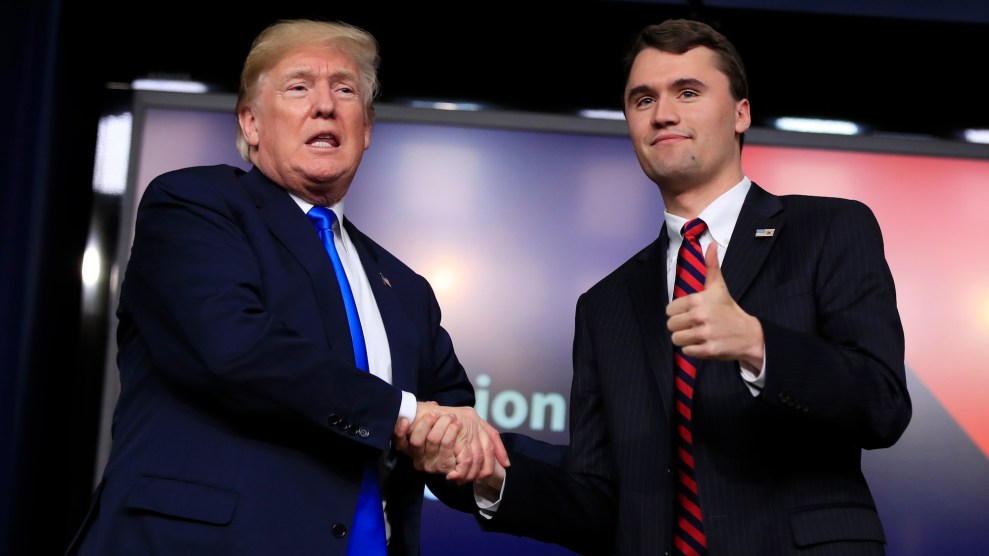 “Do we not love President Trump?” Charlie Kirk yelled to several thousand assembled high school and college kids gathered at the Palm Beach County Convention Center for the Turning Point USA student action summit. “We love our president, and what the media is trying to do to destroy him is reprehensible!”

Kirk, the conservative youth group’s 25-year-old founder, whipped the crowd up into loud chants of “USA! USA!” as he insisted that the “fake news” media refuse to acknowledge that conservative young people exist. He was here to prove them wrong. Kirk urged students in MAGA hats to proclaim their love for Trump at top volume. “Hey media, show this!” he shouted at the few cameras in the back of the room. “Show this!”

As the noise died down, Kirk asked the crowd, “How many of you have been called a racist for supporting Donald Trump?” Lots of hands went up. “How many of you have had your grade lowered because you supported Donald Trump?” More hands. How many have been maligned on college campuses—“islands of totalitarianism”—for supporting Trump? A smattering of hands. “Stand up if you are a former liberal!” About two dozen people stood up, and the crowd went wild. “You are on the precipice of the biggest cultural war in our history,” Kirk told them.

Turning Point USA has only been around since 2012, but in its brief history, it has indeed put itself on the front lines of the culture war. Spreading like wildfire on college and high school campuses, Turning Point engages in meme battles with lefties, deploying a #BigGovernmentSucks hashtag. It maintains a “watchlist” of allegedly socialist professors while nursing an intense persecution complex that’s on full display in Palm Beach this week.

Students as young as ninth grade are here absorbing the talking points of the conservative movement, learning from the likes of Brexit architect Nigel Farage, former White House adviser Sebastian Gorka, Donald Trump Jr. and his girlfriend, and a long list of Fox News stars, even though the general consensus seems to be that Fox News is for geezers. This is a YouTube audience. Its most popular speakers are people who have circumvented the mainstream media on their way to conservative luminary status: Jordan Peterson, the favorite psychologist of the men’s rights movement; gay libertarian talk show host Dave Rubin; Mike Cernovich, the conspiracy theorist who now regularly hosts the Alex Jones Show on Infowars; and Allie Stuckey, the conservative millennial blogger known for her “make men masculine” posts.

From such luminaries, the students who flocked to Palm Beach have learned all the things that liberals have ruined: dating, men, college, Hollywood, and memes. “Leftists,” as conference speakers like to call progressives, have turned the country into a nation of sensitive snowflakes where no one can say anything lest he or she offend someone. Censorship lurks everywhere for these conservative students, who are sure that their bad grades are due to their support of Trump.

“We love our president, and what the media is trying to do to destroy him is reprehensible!”

They’re very young. At least three high school kids told me their moms instructed them to come, and one of the moms also attended. Ninth-grader Kenny Kakaty, a.k.a. “Kenny the Patriot,” has been playing the national anthem on the guitar at conservative confabs since he was 12. Others are newbies, like Kevin, 15, a Miami conservative in the liberal bastion of the Broward County public schools, and Asha Devi, a New York University drama student who said her improv has been censored by the other students in her program because of her political views. “In my industry, I will be castrated if I expose conservative views,” Devi told a pair of conservative Instagrammers on hand to teach conservative kids how to win social media. One 16-year-old high school student stood up during at least two different events and announced his candidacy for president in 2040.

A high school junior whose braces accessorize his gray suit told me he missed part of the conference because he was studying for midterms. But he has been working with TPUSA for about a year, having started a chapter at his Fort Lauderdale private school that quickly enlisted 200 students before he says they were kicked off campus by school administrators. He is one of a number of students here whose school chapters have been shut down. Student activists for the group complain that they’re frequently called Nazis and racists by liberals. But Turning Point has had trouble separating itself from the alt-right and white nationalists.

One of the summit’s original sponsors was Gab, the social-media site favored by white supremacists and anti-Semites. There’s a lot of chatter at the student summit about big-tech platform discrimination and the injustice of companies like Patreon dropping controversial conservative online figures. Yet just a few days before the event kicked off, Turning Point dropped Gab from its list of sponsors, with no public explanation. In February, members of the Traditionalist Workers Party, a neo-Nazi group, wielded bats, chanted Nazi slogans, and clashed with protesters at a speech Kirk gave at Colorado State University.

Among Turning Point’s signature campus stunts is an affirmative action bake sale, where prices vary depending on the race or gender of the purchaser. During “free speech week” earlier this year, student members at the Kent State TPUSA chapter donned adult diapers and pacifiers and sat in a makeshift crib to mock the crybabies of the left. The event backfired and led to so much online mockery that the campus chapter dissolved itself.

The group has also come under fire for bringing Citizens United-style dark money to student leadership campaigns. That dark money heavily subsidized students’ attendance at the summit. TPUSA’s budget for the fiscal year ending in June 2017 was about $8 million, nearly double the previous year, and is expected to be close to twice that for 2018. Turning Point has been showered with money from the oil and gas industry and other billionaires, and it has ties to groups funded by the Koch brothers.

Ostensibly created as a nonpartisan nonprofit that focuses on free-market economics, the group has run into trouble because of its close association with Trump and its work on Republican campaigns. The New Yorker reported last year that students from the group were enlisted to campaign for Republican candidates in 2016, possibly in violation of campaign finance laws that bar nonprofits from working on behalf of specific candidates.

Outside the convention center Thursday, the Trump administration was blowing up. The defense secretary resigned, Trump was threatening to shut down the government over border wall funding, and the stock market was tanking. But inside the bubble, Trump was only winning. Trump Jr. was one of the most anticipated speakers of the day. Kids ducked out of breakout sessions early to get better seats to see the president’s son.

Trump Jr. only took questions from the audience that were texted in—a cellphone number harvesting scheme that could help the 2020 Trump campaign. “Today, JFK would be considered alt-right!” he told the crowd. He insisted that the election in November, in which the GOP lost 40 seats in the House, was “probably the most successful midterms in 40 years.” He also touted his father’s hastily announced decision to pull US troops out of Syria. “You know why I know that’s a great idea?” he said. “Because all the neocons who have kept us in foreign wars for decades are going crazy.”

After Trump wrapped up to a standing ovation, Gorka, who has ties to the alt-right and far-right anti-Semitic groups in Europe, organized the audience into a group photo taken by Trump in front of a giant American flag. As they assembled, the students chanted, “USA! USA!” Gorka promised that there was a “101 percent chance” that the resulting photo would be viewed by the president himself. “Thumbs up for the boss!” Gorka said.

Since the media referred to us last year as “A small group of conservative students” I figured we would take a pic this time. All these great patriots turned up at the @turningpointusa Student Action Summit yesterday in Palm Beach, Florida to hear me @kimberlyguilfoyle and many other great conservative speakers. Looks like a movement to me!!!

Afterward, some of the conference attendees walked to the hotel next door and huddled outside in the rain, awaiting Ubers to ferry them to the Trump-owned Mar-a-Lago for a Turning Point fundraiser, for which they’d paid at least $2,500 apiece, headlined by Rush Limbaugh and Trump Jr.