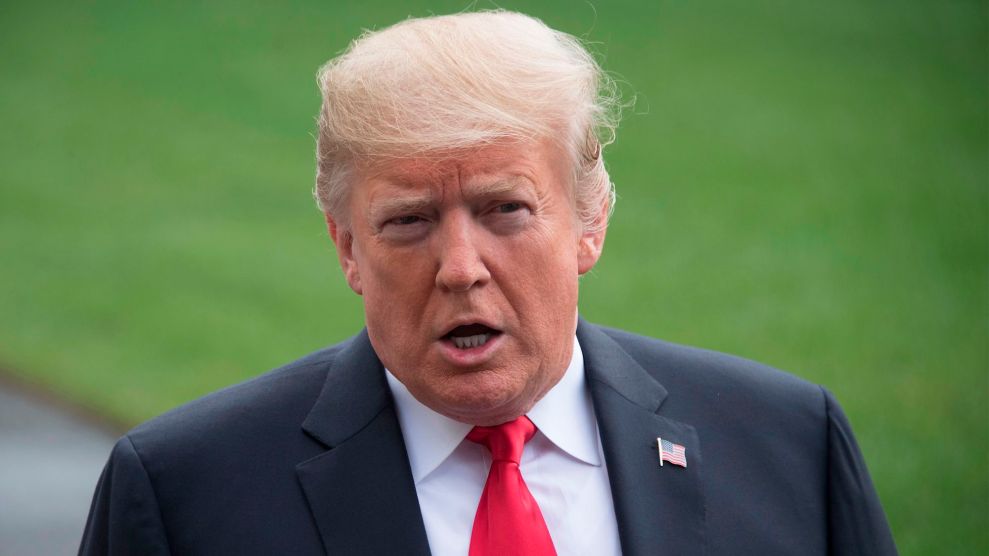 President Donald Trump is not happy.AFP/Getty

On Friday, special counsel Robert Mueller is expected to file two new documents key to his investigation into the Russian government’s efforts to interfere with the 2016 presidential election. Today is the deadline for Mueller to submit to a New York federal court his assessment of former Trump lawyer Michael Cohen’s cooperation in the probe. And in Washington, DC, Mueller will explain to a judge why he has accused former Trump campaign manager Paul Manafort of violating his plea deal.

The filings—which come on the heals of a document in which Mueller detailed extensive cooperation by former Trump national security adviser Michael Flynn—could be explosive. And if the president’s Twitter feed is any indication, he isn’t handling it well. He took to his favorite medium Friday morning to accuse Mueller of “Conflicts of Interest” and criticize a potential forthcoming public report from Mueller as being part of a “Witch Hunt.” He also pushed back on an Atlantic article yesterday suggesting that Trump and his team were unprepared to respond to Mueller’s findings.

You can read the nearly 1,000-character freak-out here:

Robert Mueller and Leakin’ Lyin’ James Comey are Best Friends, just one of many Mueller Conflicts of Interest. And bye the way, wasn’t the woman in charge of prosecuting Jerome Corsi (who I do not know) in charge of “legal” at the corrupt Clinton Foundation? A total Witch Hunt…

….Will Robert Mueller’s big time conflicts of interest be listed at the top of his Republicans only Report. Will Andrew Weissman’s horrible and vicious prosecutorial past be listed in the Report. He wrongly destroyed people’s lives, took down great companies, only to be……..

…..overturned, 9-0, in the United States Supreme Court. Doing same thing to people now. Will all of the substantial & many contributions made by the 17 Angry Democrats to the Campaign of Crooked Hillary be listed in top of Report. Will the people that worked for the Clinton….

….Foundation be listed at the top of the Report? Will the scathing document written about Lyin’ James Comey, by the man in charge of the case, Rod Rosenstein (who also signed the FISA Warrant), be a big part of the Report? Isn’t Rod therefore totally conflicted? Will all of….

…the lying and leaking by the people doing the Report, & also Bruce Ohr (and his lovely wife Molly), Comey, Brennan, Clapper, & all of the many fired people of the FBI, be listed in the Report? Will the corruption within the DNC & Clinton Campaign be exposed?..And so much more!

He did pause to discuss China negotiations…

Before getting right back to the witch hunt.

It has been incorrectly reported that Rudy Giuliani and others will not be doing a counter to the Mueller Report. That is Fake News. Already 87 pages done, but obviously cannot complete until we see the final Witch Hunt Report.

Today, we honor those who perished 77 years ago at Pearl Harbor, and we salute every veteran who served in World War II over the 4 years that followed that horrific attack. God Bless America! https://t.co/zbu4NLVr4G pic.twitter.com/5hbLDrqg40

We will be doing a major Counter Report to the Mueller Report. This should never again be allowed to happen to a future President of the United States!