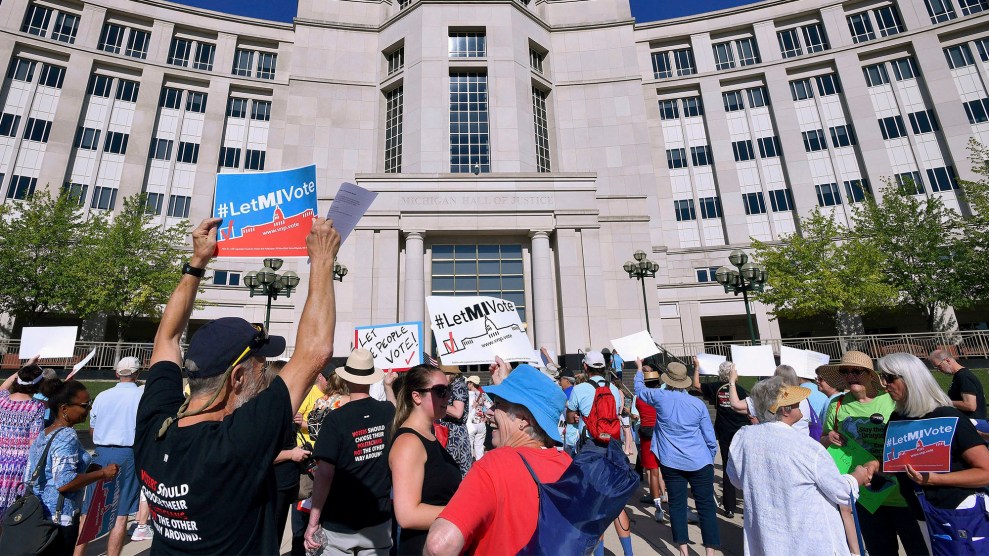 In a huge victory for voting rights, voters in a half dozen states approved ballot initiatives on Tuesday that will restore the franchise to ex-felons, make it easier to register to vote, and curb partisan gerrymandering. Despite aggressive voter suppression efforts across the country, these initiatives passed easily in both red and blue states, indicating broad support across partisan and ideological lines for expanding voting rights.

In addition, Michigan, Colorado, and Missouri approved initiatives to rein in gerrymandering by drawing political districts in a non-partisan way. All of these initiatives received at least 60 percent of the vote, reflecting broad support for a pro-voting rights agenda. (A seventh initiative, to create an independent redistricting commission in Utah, was narrowly ahead with 50 percent of the vote as of Wednesday morning, but it remains too close to call until all the mail-in ballots are counted.)

“It’s a reaffirmation that voting rights are popular,” says Faiz Shakir, political director of the American Civil Liberties Union, which put a combined $10 million behind initiatives in Florida, Michigan, Nevada, and Utah. “They obtain support across ideological grounds, which in these tribal times is an astounding feat. People understand that we can and should play on offense. For years, we’ve been playing on defense when it comes to voter ID and other issues.”

For years, Republicans like Kansas Secretary of State Kris Kobach, who lost his bid for governor on Tuesday, have spread false claims of widespread voter fraud, leading 24 states to adopt new restrictions on voting since 2010. “Last night showed that the biggest problem voters see is a desire to see voting made easier and the political system more representative of the people,” Shakir says.

The passage of Amendment 4 in Florida, which could restore voting rights to the 1 in 10 Floridians who are disenfranchised because of a felony conviction, was particularly remarkable given the broader political climate in the state. Republican Ron DeSantis was elected governor on Tuesday, and Republican Gov. Rick Scott leads incumbent Democratic Sen. Bill Nelson in the state’s Senate race, although the race has not yet been called. While the Democratic candidates for those two offices fell just shy of 50 percent of the vote, Amendment 4 received 65 percent of the vote, clearing the 60 percent threshold needed to pass.

Even though ex-felons in Florida lean Democratic, a huge and unlikely coalition supported Amendment 4, including conservative groups like the Christian Coalition and the Koch brothers-backed Freedom Partners. “We don’t know who’s going to vote for whom, and at the end of the day we shouldn’t worry about that,” Mark Holden, a senior vice president at Koch Industries, told Vice News. “We should try to make sure that people are coming back into society with a chance to succeed and that we’re treating them in a way that’s humane and that we’re not reminding them every single day of their life the worst thing they ever did.”

“People understand that the voting system is broken and we need to restore justice and fairness to the process,” Shakir says. “When you get people to weigh in on the issue, devoid of a partisan label, people are very sensible and break their ideological tribe in favor of principles they care deeply about. And this is one of them. If you put a D or R next to it, it won’t succeed. But there is still room to reach across partisan and ideological lines.”

However, in a setback for voting rights, voters in Arkansas and North Carolina passed constitutional amendments requiring government-issued photo ID to vote, which could depress turnout among low-income voters and voters of color. Similar laws in both states had previously been struck down by the courts, with a federal court in 2016 ruling that North Carolina’s voting restrictions targeted black voters “with almost surgical precision.”

Shakir says the ACLU and other groups will push to put more initiatives on the ballot to expand voting rights in 2020, in the 26 states that allow citizens-led initiatives. Tuesday’s results, he believes, were a clear signal to newly elected Democrats and presidential aspirants to make protecting voting rights a top priority.

“For anyone thinking of grand ambitions to run for president or pass legislation through a Congress that is split, these kind of voting expansions have found bipartisan support in very red and blue areas,” he says. “Anyone in Congress or thinking about running for president would be remiss if voting rights was not at the top of the agenda.”

Listen to author Ari Berman, along with other MoJo journalists, explain all the twists and turns of Election Day, and what comes next for America, on this special episode of the Mother Jones Podcast: