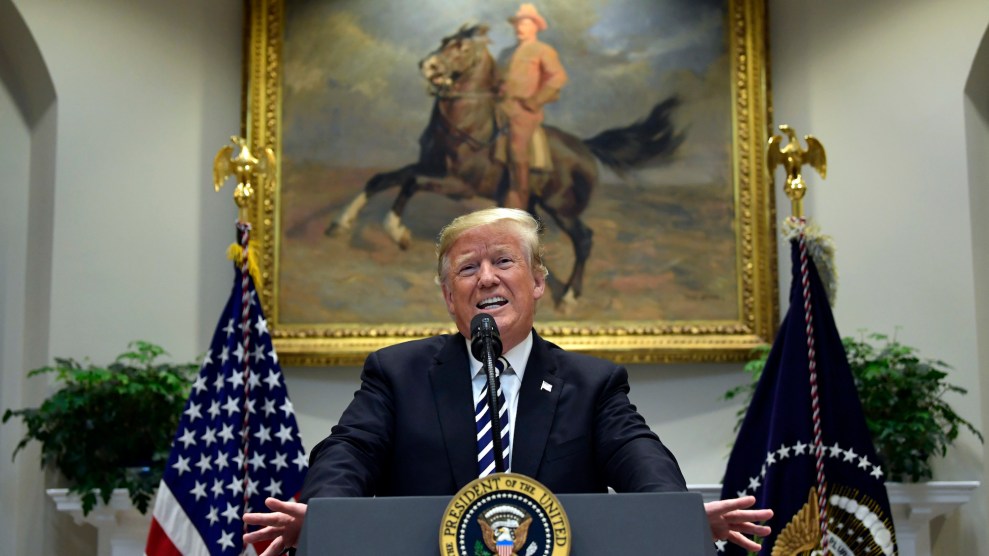 President Donald Trump used a speech at the White House on Thursday afternoon to make a closing argument before Tuesday’s midterm elections: The migrant caravan slowly walking toward the United States is an “invasion,” and his administration will take extreme measures to stop it.

The speech was Trump’s latest effort to make immigration the key issue in midterm elections. Republicans see immigration as a winning issue to turn out their base voters. They’ve described a crisis at the border, even though Border Patrol apprehensions are far below historical levels.

Trump said on Thursday that the administration plans to prevent migrants who cross the border illegally from gaining asylum—a radical and possibly illegal move. HuffPost reports:

President Donald Trump said Thursday that his administration is finalizing a plan to deny asylum to migrants who cross into the U.S. illegally ― a move that would be sure to draw legal challenges should it come to fruition…

He said Thursday that he would issue an executive order “sometime next week” that would be “quite comprehensive.” He said the plan would shut down access to asylum for people who seek safety in the United States unless they go to legal ports of entry. By law, immigrants can seek asylum either at ports of entry or once in the U.S. ― even if they crossed illegally.

Trump insisted his plan to restrict asylum would be “totally legal.” He repeated his vow to indefinitely lock up asylum-seekers while they pursue immigration claims, and claimed that “almost everybody” is abusing the system rather than pursuing legitimate efforts.

Immigrant rights groups are expected to challenge any limits placed on access to asylum.

“President Trump did not announce an immigration policy this afternoon, but repeatedly lied about the asylum system, his family separation policy, and his largely unfunded wall,” Omar Jadwat, director of the ACLU’s Immigrants’ Rights Project, said in a statement after the president’s address. “If he plans at some point to prohibit people from applying for asylum between the ports of entry, that plan is illegal. What is clear from the timing and vague nature of today’s remarks is that he is simply trying to inflame his base in the final run-up to the midterms.”

Trump’s comparison of the caravan—many of whose members are women and children seeking asylum—to an invasion echoes the language of Robert Bowers, the man accused of killing 11 people at Pittsburgh synagogue on Saturday. “I have noticed a change in people saying ‘illegals’ that now say ‘invaders.’” Bowers wrote in one social media post. “I like this.”