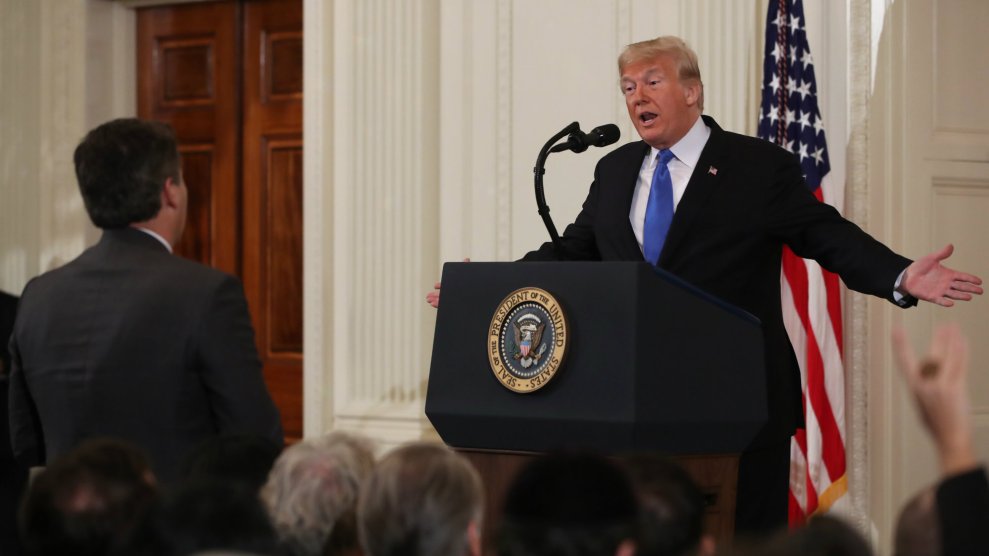 Donald Trump escalated his personal feud with CNN correspondent Jim Acosta during a press conference Wednesday, calling the reporter “very rude” and saying that “CNN should be ashamed of itself” for employing him.

The awkward spat occurred during a White House press briefing where Trump took questions about the Republicans’ performance in the midterm elections and the prospect of a Democrat-controlled House of Representatives. The exchange was tense from the start as Trump frequently interrupted Acosta, stepped away from the lectern, and ordered the reporter to “put down the mike.”

“I think you should let me run the country while you run CNN,” Trump said at one point. “If you did it well, the ratings would be much better.”

Acosta went on to ask if the president had concerns about “indictments coming down” in the investigation Special Counsel Robert Mueller is conducting into possible election meddling between Russia and the Trump campaign. “That’s enough,” Trump replied as a staffer handed Acosta’s microphone to another reporter, NBC News‘ Peter Alexander.

“CNN should be ashamed of itself having you working for them,” Trump said. “You are a rude, terrible person. You shouldn’t be working for CNN.”

LOL someone's pretty cranky after having such a successful night! (STOP EVERYTHING AND WATCH THIS) pic.twitter.com/y1I7jv0MB9

Acosta has frequently drawn the White House’s ire by passionately defending the press in a series of heated on-camera interactions with press secretary Sarah Huckabee Sanders. In August, Acosta asked Sanders to specifically denounce Trump’s repeated claim that journalists are the “enemy of the people.” She declined, instead saying, “It’s ironic, Jim, that not only you and the media attack the president for his rhetoric, when they frequently lower the level of conversation in this country.” Acosta left the briefing in protest.

Since taking office, Trump has smeared mainstream news outlets as “fake news” and singled out reporters by name on Twitter and at rallies. As Mother Jones reported in September, “the targeting of journalists has steadily intensified in the Trump era, from organized campaigns of personal harassment to bomb threats and vows of assault, rape, and mass shootings.” Days before the midterm election, a Trump supporter who shared conspiracy theories online mailed a pipe bomb to CNN’s New York headquarters, in addition to the homes of several prominent Democrats.

On Wednesday, NBC’s Alexander spoke out in defense of Acosta when the president called on him for a question. “I’ve traveled with him and watched him—he’s a diligent reporter who busts his butt.”