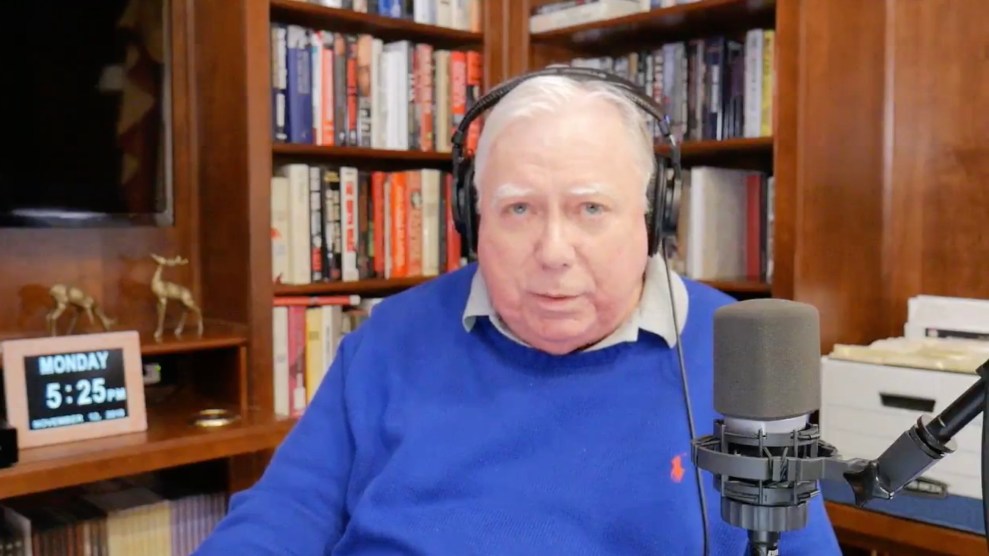 Right-wing conspiracy theorist Jerome Corsi announced Monday evening that he expects to be indicted by Special Counsel Robert Mueller in the coming days for perjury.

In rambling video that he livestreamed on YouTube, Corsi explained that Mueller’s office had informed him of plans to level criminal charges against him for lying during interviews that focused on alleged involvement with WikiLeaks and with longtime Trump adviser Roger Stone. Corsi’s nearly one-hour video bounces from discussing his legal woes and pleas for PayPal donations to cover legal fees, to expressions of Christian faith, to allegations that Democrats are engaged in vote fraud and that billionaire George Soros is funding the caravan of migrants headed toward the US border.

“I tried to cooperate for two months with the Mueller investigation, and what I’m gonna get in return is indicted,” Corsi said, appearing chagrined.

“I anticipate being indicted for some form of lying,” he added.

Prosecutors have questioned Corsi about his relationship with Stone, who has partnered with Corsi on right-wing projects in the past. Investigators reportedly pressed Corsi on whether he served as a conduit between Stone and Julian Assange, the WikiLeaks founder who released troves of stolen Democratic emails during the 2016 campaign. Mueller has charged Russian intelligence agents with hacking the emails and sharing them with WikiLeaks.

Corsi seemed to address prosecutors’ interest in his WikiLeaks ties in a strangely worded statement. “To the best of my knowledge I’ve never met Julian Assange,” he said. He also stated that his knowledge of what stolen Democratic emails Assange planned to release came “mostly from open sources.”

NBC News previously reported that Corsi has been questioned by Mueller’s prosecutors about why he would have advance knowledge of emails that WikiLeaks had from Clinton campaign chair John Podesta.

Before the Russia investigation, Corsi was best known for his role with “Swift Boat Veterans for Truth,” a group that falsely attacked the war record of 2004 Democratic presidential nominee John Kerry, and for pushing birtherism, the false notion that former President Barack Obama was not born in the United States.

Corsi said in his video that Mueller’s prosecutors had caught him in a “perjury trap,” noting they obtained access to his communications and computer, and brought him to Washington three times for six rounds of questioning. He suggested prosecutors had worn him down and then caught him in inconsistencies. “At the end of two months my mind was mush,” Corsi said. He compared prosecutors to “the KGB or Gestapo” and said he “felt like a prisoner in the Korean War.”

“I think my crime really was supporting Donald Trump,” he said. “At any rate, I still support Donald Trump.”