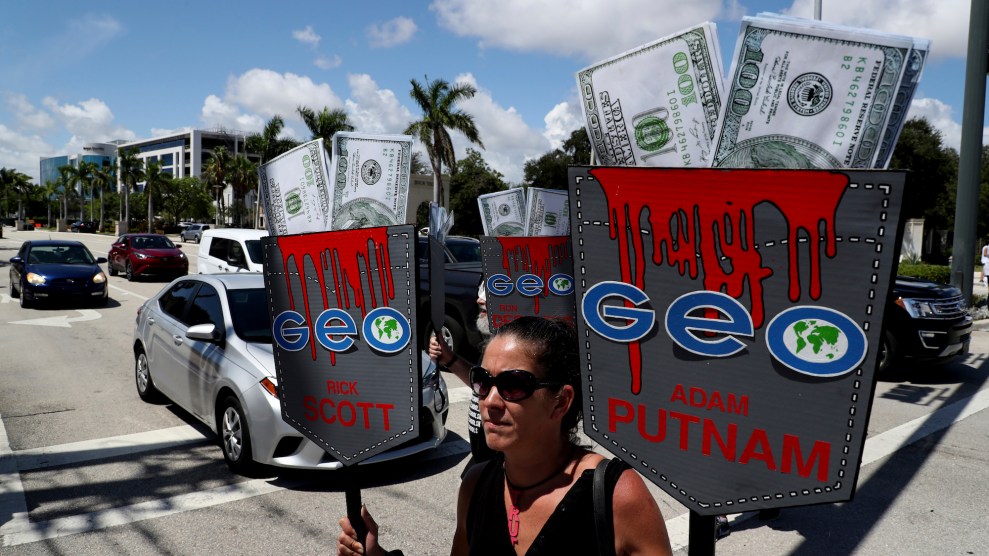 A protest against the GEO Group private prison company in Florida.Carline Jean/AP

Private prison companies poured record amounts of money into the 2018 elections—more than $1.6 million in federally disclosed contributions as of mid-October, according to the Center for Responsive Politics. That’s more than three times as much as the industry spent in any other midterm year, and about the same as its spending in the 2016 election, when Hillary Clinton openly called for an end to private prisons. (And these figures don’t include any money the industry may have given to dark-money groups that don’t have to reveal their donors.)

A large proportion of that money appears to have gone to candidates from the Sunshine State, home of the country’s largest private prison company. The Boca Raton-based GEO Group manages 129 prisons, immigration detention centers, and reentry or youth facilities nationwide, including five prisons and one detention center in Florida. So it’s no surprise GEO is a major player in state politics—donating a whopping $1.2 million to Florida candidates and causes this election cycle, according to a tally by the Tampa Bay Times.

For starters, the company spent heavily to make sure a Republican kept the governor’s office. In addition to investing $67,000 in the failed primary campaign of Adam Putnam, GEO donated $100,000 to a political action committee supporting Ron DeSantis, while its CEO, George Zoley, chipped in more than $100,000.

But unlike most Florida politicians, Democratic gubernatorial candidate Andrew Gillum pledged not to take prison industry contributions. He also said private prisons “should not exist” and “ought to be illegal” in Florida. For GEO, this wasn’t an idle threat: Local pressure on the industry has increased since a Florida lawmaker began independently investigating the state’s prison system, alleging that the second-biggest private prison company, CoreCivic, overcharged the state. Twelve percent of Florida inmates were held in private prisons in 2016, according to the Sentencing Project.

According to the South Florida Sun Sentinel, a GEO subsidiary, Zoley, and his family also directed an additional $200,000-plus to committees supporting the Senate campaign of Republican Gov. Rick Scott, who has been a staunch ally of the prison industry. Scott was elected governor in 2010 after making a campaign promise to save the state $1 billion in prison spending. In 2012, he attempted to push through a bill that would have privatized a third of Florida prisons, and he later signed a a series of contracts to privatize prison medical care and work-release programs.

The company also funneled at least $45,000 to Ashley Moody, a Republican who won the election for state attorney general. Moody has defended her choice to take the contributions, saying they wouldn’t influence her decisions as the state’s chief legal officer.

Outside Florida, GEO donated more than $430,000 to committees and candidates at the state level, according to the National Institute for Money in Politics. Much of that spending was in states with some of the highest incarceration rates in the world, like Alabama (where GEO gave $52,500), Oklahoma ($53,500), and Texas ($43,500). In Texas, GEO also directed about $25,000 toward elections for county commissioners and judges in districts where the company operates immigration detention centers, according to Federal Election Commission filings. Such local politicians are often involved in making lucrative immigration detention deals in which counties act as middlemen between private prison companies and the federal government.

Last year, Republican State Rep. Mark Keough sponsored legislation authored by GEO that would license one of its detention centers as a “child care facility” so that it could continue to hold migrant kids with their families for extended periods of time. Keough received a $2,500 contribution from GEO this spring. On Tuesday he was elected to the commissioners court in Montgomery County, where GEO operates two detention centers for the US Marshals Service and Immigration and Customs Enforcement (ICE).

Then there’s Congress. Democratic control of the House means that private prison companies will likely have fewer allies on the strategically important Homeland Security appropriations subcommittee, which oversees ICE’s budget for detaining immigrants—the source of a quarter of GEO’s revenue last year.

Members of the subcommittee are some of the top congressional recipients of private prison campaign cash. That includes Rep. John Culberson (R-Texas)—who received $44,000 in contributions from the industry this cycle, only to be defeated by Democratic upstart Lizzie Fletcher. Rep. Henry Cuellar (D-Texas) won reelection after taking $36,400 from the prison industry, according to the Center for Responsive Politics. Cuellar is perhaps the industry’s most vocal Democratic defender; in July he praised GEO for playing “an important role in maintaining our public safety,” adding that “without them, rapists, murderers, and other offenders would not be incarcerated.”

While President Donald Trump has spent months talking about plans to lock up migrant families indefinitely, that would require expanding immigration detention—a move that now looks less likely after Tuesday’s results. During an earnings call the morning after the election, Zoley told investors that his company didn’t expect to see much change in homeland security funding for the time being. “But,” he said, “we still see there to be opportunities within our detention sector, in particularly with ICE.” (Both GEO and CoreCivic have long maintained that they do not advocate policies that could affect the basis for or length of a person’s incarceration or detention.)

The prison industry started ramping up its political giving toward the end of the Obama administration as the federal government reduced its inmate population and announced it would phase out some private prison contracts (a move later reversed by former Attorney General Jeff Sessions). Its donations go overwhelmingly to Republicans. In the 2018 election cycle, just 11 percent of private prison companies’ reported campaign contributions went to Democrats. Some Democrats have started turning down or giving away contributions from the industry. Sens. Amy Klobuchar of Minnesota, Dick Durbin of Illinois, and Chris Coons of Delaware have rejected prison cash, as have Democratic Congressional Campaign Committee chair Rep. Ben Ray Luján of New Mexico and the state Democratic parties in California and Florida.

The new Democratic Congress could call politically damaging hearings into private prison company operations, says Bob Libal, executive director of Grassroots Leadership, a private prison abolition group. The House could investigate conditions in ICE detention centers or ask why the Federal Bureau of Prisons continues to contract with private detention centers after its own investigatory body determined in 2016 that they were less safe and secure than their public counterparts. “What we know is that the private prison industry thrives in the darkness,” Libal says. “It does very poorly when there is a lot of sunshine on it.”