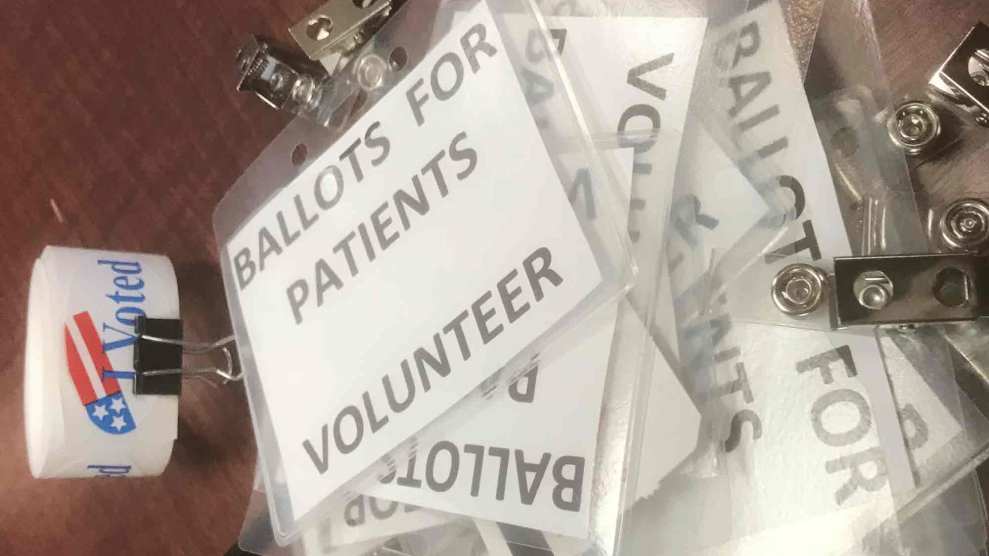 At just around 2pm on Election Day, a handful of get-out-the-vote volunteers sat around a folding table picking at plates of hospital cafeteria mashed potatoes and chicken. They were enjoying a break at the University of Pittsburgh Medical Center’s Shadyside Hospital, and keeping tabs from afar on the 47 absentee ballot request forms they’d collected from cancer patients, accident victims, and other people who had the bad luck to be hospitalized as much of the country headed to polling places for the midterm elections.

“It ain’t easy. It really takes an all-day army of volunteers,” Paul O’Hanlon, a lawyer who has spearheaded hospital voting in Pittsburgh since 2008, had explained at a volunteer briefing shortly before the election. This year the group coordinated teams at nine hospitals across Allegheny County.

“It really takes an all-day army of volunteers.”

Pennsylvania law allows sick and disabled people unable to make it to a polling place to apply for absentee ballots, but voters who, say, have scheduled surgery or are expecting a baby at election time don’t qualify. For them and those who unexpectedly find themselves in the hospital after absentee application deadlines have passed, the state offers an emergency absentee ballot. Qualified voters seeking to cast such an absentee ballot can usually take care of everything in a single stop at their county elections office. But if you’re stuck in a hospital bed, it’s an arduous affair.

“It’s very complicated, but that’s why we do it,” says Alisa Grishman, a disability rights activist and one of the key organizers behind Pittsburgh’s Ballots for Patients initiative. “Part of the problem is our backwards voting laws when it comes to absentee ballots.”

For the last five election cycles, the group has connected with a growing number of hospitals several months ahead of voting to arrange or confirm cooperation. On the Monday night before the election, patients receive small fliers on their dinner trays notifying them that they can request a visit from a volunteer who can help them vote. Volunteers working with Shadyside Hospital’s sickest patients were taught at the beginning of Election Day how to scrub up and sanitize their clipboards and pens. After breakfast was served, the GOTV teams at Shadyside and the other hospitals work from the lists, going room by room helping patients fill out emergency absentee ballot request forms, and collecting authorizations that allow them to shuttle their ballot paperwork. Around noon, the requests are collected and put in front of a notary and a doctor, who must sign them to attest that the patient is hospitalized and unable to get to the polls.

The notarized forms are then shuttled downtown, by car or by bus, to the Allegheny County Board of Elections office. Clerks verify each voter’s eligibility and provide a ballot tailored to their home address. Meanwhile, copies of the applications make a stop in front of a judge, who formally approves each patient’s request. While Grishman and O’Hanlon stress their project is strictly nonpartisan, during the 2016 and earlier presidential election cycles they say GOP lawyers fruitlessly objected to all their voters, all residents of Democratic-leaning Allegheny county, slowing down the process. Attorneys working with Ballots for Patients reported no similar objections today.

“We’re just amateurs doing the best we can.”

With that paperwork out of the way, couriers return to the election office and pick up the stacks of ballots to take back to the hospitals, each inside an envelope labeled with the patient’s name and room number. By 3pm, volunteers with the ballots get to work on relocating each patient. “It’s not unusual for people to be discharged between the time in the morning when they filled it out and you’re back there in the afternoon, or people you can’t find because they’re in x-ray,” O’Hanlon says. “We do what we can, but things happen.“

After all this, there are perhaps 40 to 50 ballots per hospital that are gathered up and driven downtown back to the county election office, where they must be dropped off before the state’s polls close at 8pm. Based on past experience, the organizers expect to shepherd about 300 patients’ ballots through the process today, thanks to the help of roughly 100 volunteers, including couriers, lawyers, doctors, and notaries.

Ballots for Patients is the only effort of this scale in Pennsylvania to help hospitalized voters, and its organizers say they aren’t aware of similarly sized programs elsewhere. The organization can only help voters who are registered in Allegheny County and, for logistical reasons, must turn away patients who don’t complete the first step to request a ballot early enough. “There’s a certain amount of chaos in the day,” explains O’Hanlon. “We’re just amateurs doing the best we can.”

While UPMC press representatives declined to let Mother Jones observe patients take part in the process, volunteers involved with the effort are full of inspiring stories: The 94-year old woman who said she had voted in every election of her life and was thrilled to keep her streak. The patient who tried to delay treatment in order to go to the polls but was relieved to discover this option. Or the new mother who was thrilled to fill out a ballot with her newborn resting in a nearby bassinet.

Kristin Wessell, who lives just outside of Pittsburgh in Mt. Lebanon, led Shadyside’s GOTV efforts on Tuesday. Wessell, who also volunteered at the hospital during the 2016 elections, recalled a helping a voter on the cancer ward that day. “You put on your gown and your face mask and you go in,” she said, dabbing tears from her eyes. “There was a woman last time who said to me, ‘I know I’m dying and this will be my last vote.’ It made me feel like voting is a sacred duty.”