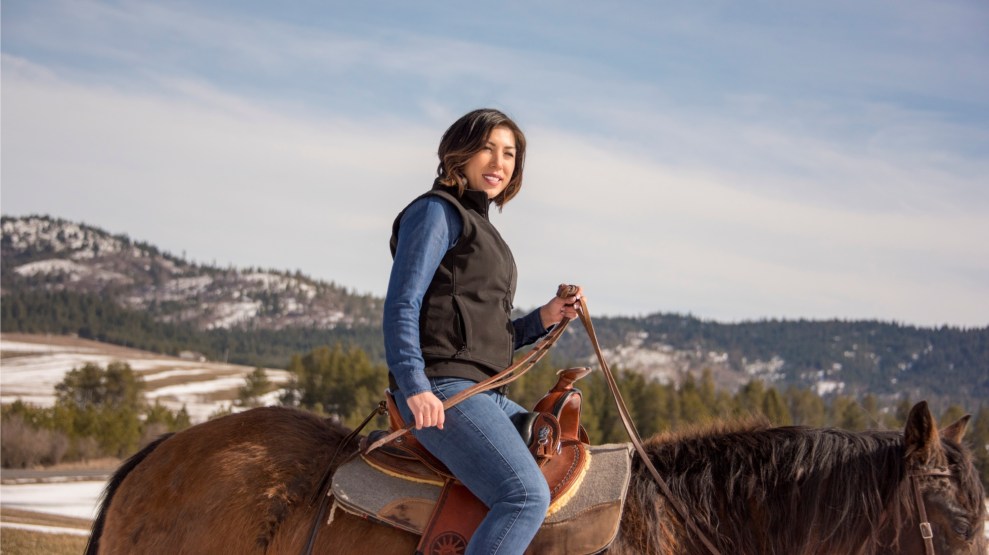 At first glance, Paulette Jordan seems like an improbable choice for Idaho governor. She’s a young Native American woman running on a progressive platform in a state that has never had a governor who wasn’t a white man and hasn’t elected a Democrat to the governor’s mansion since 1990. Even Democratic candidates for the office over the last several decades have overwhelmingly been moderate, old white men. The Idaho-Statesman editorial board, in an article endorsing Jordan in the primary, called the middle-aged lawyers and businessmen typically nominated for the Democratic spot “the sacrificial lamb” of the elections.

But this election isn’t like the others. Across the country, an unprecedented number of women, LGBT people, and Native Americans have run for office, and many have won their primaries and are favored to win in November. Like them, Jordan has exceeded Idaho progressives’ expectations, garnering support from surprising places and raking in campaign funds. Jordan, a member of Idaho’s Coeur d’Alene Native American tribe, is banking on grassroots support and distrust of the political machine to propel her to victory. The stakes are high: If she wins in November—besting Brad Little, the 64-year-old lieutenant governor—she’ll become the nation’s first Native American governor, as well as the first woman and person of color to lead Idaho. But regardless of whether she wins, her campaign may change Idaho politics for good.

Jordan, 6 feet tall and only 38 years old, grew up on a farm on the Coeur d’Alene reservation in rural Idaho, “playing in the field” and horseback riding. She became involved in local activism during college in Seattle, when she worked in the mayor’s office and served as a student representative to the University of Washington president’s advisory board. After graduation she returned to Idaho, and at 28 became the youngest person elected to the Coeur d’Alene Tribal Council, a seat she ran for at the urging of her grandfather, a tribal elder. Jordan says the tribe’s “it takes a village” mentality and the strong female leadership she saw around her affected her choice to get involved in politics and become a leader for her community.

During her time on the council, Jordan was involved in the expansion of a health care facility run by the Coeur d’Alene tribe and located on the reservation. In 2014 she ran for the state Legislature, an office she held until early this year, when she resigned to start her gubernatorial campaign. In the Statehouse, Jordan co-sponsored a loan forgiveness bill for rural teachers and was the lone vote against a bill to punish sanctuary cities, an effort by the state’s conservative Legislature to show solidarity with President Donald Trump, who in January 2017 signed an executive order penalizing sanctuary cities for not cooperating with his administration.

Jordan’s gubernatorial campaign has focused on many of the same issues. In a debate earlier this month, Jordan defended sanctuary cities, although she stopped short of joining in the resistance-left’s calls to end Immigration and Customs Enforcement. At a more recent debate, she clashed with Little on a state ballot initiative to expand Medicaid, which Little has yet to say he supports.

“I’m just connected to the land in so many ways. I think it’s important to share my heritage.”

Her position on expansion, as well as on universal health care—she’s highlighted the lack of health care access in rural communities—and marijuana, which she wants to legalize, has appealed her to the Democratic Party’s progressive bloc and made her a darling of the left this election cycle. And it’s paid off: She knocked out her closest primary challenger, a moderate Democrat favored to take the nomination, by nearly 20 points. But she’s not just a liberal dream. She’s a gun owner and proponent of Second Amendment rights. And she told me her campaign has purposefully stayed away from Trump-bashing rhetoric—deciding not to dwell on the president’s derogatory comments about Native Americans and his insistence on calling Sen. Elizabeth Warren “Pocahontas”—in favor of more focus on local issues, like hunting and fishing regulations.

The result is a populist campaign that’s garnered remarkable support of independents in the state, as well as some conservatives. She snagged endorsements from organizations like Indivisible, Our Revolution, and the People for Bernie Sanders, and celebrities like Cher have tweeted their support. And in a HuffPost piece published this month, a conservative evangelical pastor who had hosted an event for Jordan’s campaign raved about her “honesty and character and authenticity,” echoing a sentiment shared by many voters in the story.

Although it’s hard to say how much non-Democratic support Jordan is getting, since the polls don’t show party line divides among candidates, Jaclyn Kettler, a political scientist at Boise State University, told Mother Jones that Jordan’s support base is defined partly by independents and first-time or undecided voters.

“It will be really interesting to see if Jordan can pick up some votes across the aisle,” Kettler said. “That progressive populist spirit [she has], especially ideas for working Americans who are struggling, those messages are really appealing to a lot of voters in states like Idaho. I just don’t know if it’s enough.”

I Met & Talked With Paulette At LAS VEGAS WOMENS RALLY.I Believe The PPL Of IDAHO Would Be WELL SERVED With Paulette Jordan As Their Governor.She is a thoughtful, Caring,Intelligent,Woman,Who Would Work TIRELESSLY 2 BENEFIT”ALL THE PPL”Of IDAHO❤️

At the core of her campaign, though, are rural issues, and in particular the public land that covers 60 percent of the state. For years, there’s been a push—partly led by billionaires like Dan and Farris Wilks, Texas fracking executives who bought 172,000 acres of Idaho land for private use in 2016—for the federal government to transfer Idaho’s public lands to the state, leaving them in jeopardy and at risk of privatization. Jordan’s upbringing on the reservation and the tribe’s reverence for the land makes the issue personal as well. “I’m just connected to the land in so many ways,” she said. “I think it’s important to share my heritage so that people understand this is not a political ploy. This is my actual way of life. This is the way I would like to see my heritage preserved.”

Engagement from Native Americans could be the key to Jordan’s success, since Native Americans overwhelmingly vote for Democrats. But they have a very low turnout rate compared with other groups. That’s due in part to restrictive voting laws in some states that require voters to have a street address, effectively excluding the many Native Americans living on reservations who use P.O. boxes because the US Postal Service doesn’t deliver to some reservation homes. Just this month, the US Supreme Court upheld a lower court ruling that requires North Dakotans to provide proof of residence to vote, potentially disenfranchising thousands of Native American voters in the state. For her part, Jordan told me she’s not taking these issues lightly, and her campaign is hosting town halls on the reservation and arranging for transportation to the polls. “It’s important for us to stand up for these voters,” she said. “[Native American voters] know there’s a major opportunity for us to make history.”

Despite her growing popularity, her campaign remains a long shot. The most recent polling indicates that her opponent, Lt. Gov. Little, has a comfortable 12-point lead, unsurprising results in a state that Trump won by more than 30 points in 2016. And despite the “blue wave” that has prevailed in some similarly red states, like in Conor Lamb’s special-election upset in Pennsylvania, Jordan is up against a well-known moderate, albeit one who only prevailed in his primary by 4 points. Little, who is almost three decades Jordan’s senior, is seen by some as boring compared with his competitor. “She’s more of an inspirational, visionary type,” one expert said in the HuffPost story. “He’s more of a kind of policy wonk, technocrat type.”

But Jordan’s campaign, the first time a Native American woman has run for the seat in the state’s history, will have lasting effects regardless of whether she wins the governor’s seat. Mark Trahant, editor of Indian Country Today and a member of Idaho’s Shoshone-Bannock tribe, compiles data on federal and state Native American candidates each election cycle. Trahant told Mother Jones that although he thinks Jordan has a “fighting chance,” the symbolic impact of her campaign can’t be understated. “When she goes into a Native community, you see all these little girls getting pictures [with her],” he said. “Changing minds about what’s possible in a whole generation, that’s the most profound thing.” Jordan concurred, saying, “It’s critical for [young people] to see someone who looks like them, who is able to lead. They can see that this is another option for them.”

And some Democrat operatives have noted that Jordan’s focus on rural issues could be a lesson for other progressive candidates trying to make headway in Trump country. “Her running the way she has, in defense of rural Idaho and defending it against the elites in Washington, has been a message that could prove very successful,” Joe Trippi, a veteran Democratic strategist, told CNN in an August profile of Jordan.

No matter what happens come November, Jordan is acutely aware of the power of her campaign. Yes, she’s changing politics in Idaho, she said—but she also hopes to set the groundwork for those who have been locked out of government for too long.

“There’s a younger generation out there who want to see themselves reflected in the Statehouse,” she said. “We’re listening, and we’re there for them.”