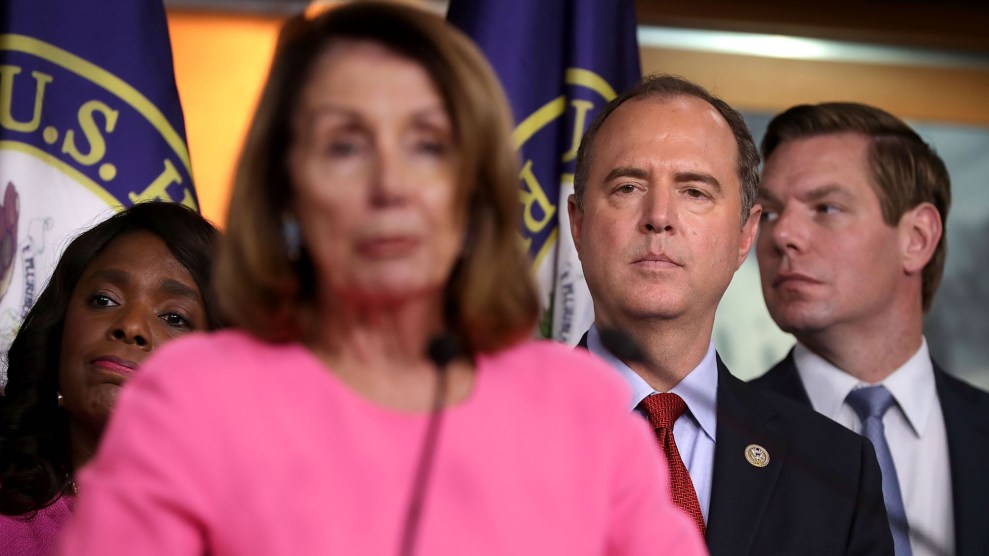 Rep. Adam Schiff (D-Calif.), the incoming chairman of the House Intelligence Committee, has signaled plans to use his newly won subpoena power to aggressively investigate whether Russian interests laundered money through Donald Trump’s businesses and used the connection as leverage over the president, a line of inquiry sure to enrage Trump.

Schiff and other committee Democrats have recently said they do not intend to launch an entirely new Russia probe but will instead pursue investigative angles that other inquiries have not delved into. Schiff has repeatedly asserted that the question of whether Trump’s businesses relied on laundered Russian funds tops that list.

“No one has investigated the issue of whether the Russians were laundering money through the Trump Organization and this is the leverage that the Russians have over the president of the United States,” Schiff said at a Brookings Institution panel discussion last month, before Democrats regained control of the House in the midterm elections. He reiterated that sentiment in an NPR interview on Wednesday.

In a report issued in March after Republicans abruptly ended the Intelligence Committee’s Trump-Russia probe, committee Democrats said they want to gather more information on Trump’s past financing by Deutsche Bank, which in 2017 was hit with $630 million in fines from US and UK regulators over its involvement in a $10 billion Russian money-laundering scheme. “We have only begun to explore the relationship between President Trump and Deutsche Bank, and between the bank and Russia,” the lawmakers wrote. They said they hope to ask: “Did the Russian government, through business figures close to the Kremlin, seek to court Donald Trump and launder funds through the Trump Organization; and did candidate Trump’s financial exposure via Deutsche Bank or other private loans constitute a point of leverage that Russia may have exploited and may still be using?”

Trump and his defenders have asserted that investigating the president’s businesses prior to his presidential run should be out of bounds for investigators. In a news conference Wednesday after Democrats captured control of the House, Trump said he would assume “a warlike posture” if Democrats investigate his finances and political dealings. He threatened to use the GOP controlled Senate to launch competing investigations of Democrats, though Senate Republicans have not indicated they’d cooperate. “If the Democrats think they are going to waste Taxpayer Money investigating us at the House level, then we will likewise be forced to consider investigating them for all of the leaks of Classified Information, and much else, at the Senate level, ” Trump tweeted Wednesday.

Schiff has also said that he plans to pursue perjury charges against witnesses suspected of lying in interview with the panel. The committee can do this by sending referral letters to Special Counsel Robert Mueller or by voting to turn over to Mueller still-unreleased interview transcripts of witnesses believed to have provided false testimony. Prosecutors could then use any information they have gathered that contradicts the witnesses’ claims to pursue perjury charges.

Democrats have said they suspect that Erik Prince, the founder of the controversial private military contracting firm Blackwater and brother of Education Secretary Betsy DeVos, former Trump campaign adviser Carter Page, and longtime Trump adviser Roger Stone, were not truthful in testimony to the Intelligence Committee. Schiff on Wednesday singled out Stone, whose possible contacts with WikiLeaks have come under intense scrutiny from Mueller. Schiff told NPR that recently released emails, “if authentic,” show that “some of [Stone’s] answers before our committee are highly suspect.”

The New York Times reported this month that Stone had emailed in October 2016 with Steve Bannon, then the head of Trump’s presidential campaign, regarding what Stone suggested was his inside knowledge of WikiLeaks’ plans for releasing hacked Democratic emails. Stone has told reporters that he never communicated with the Trump campaign about WikiLeaks. Schiff’s statement suggests Stone may have made a similar claim under oath, though it is not clear what the congressman meant. A Schiff spokesman declined to comment. Stone did not respond to inquiry.

Intelligence Committee Democrats have previously flagged a number of areas where they say their Republican colleagues failed to pursue obvious leads. For example, the GOP-led panel failed to follow up after the White House stonewalled a request for records related to President Trump’s May 12, 2017 suggestion that he may possess “tapes” of his conversations with former FBI Director James Comey. The White House merely pointed to tweets in which Trump walked back his claim about tapes. But Democrats said in March that they have “reason to believe that the White House does in fact possess” records related to the meeting.

In public remarks, Schiff has repeatedly mentioned that he wants to look into a phone call that Donald Trump Jr. received from a blocked number while Trump Jr. was arranging the June 2016 Trump Tower meeting where he hoped to receive damaging information on Hillary Clinton he believed Russia was offering. Democrats are likely to subpoena records aimed at determining if the blocked number belonged to his father, a step committee Republicans declined to take. “That’s obviously pivotal in terms of the president’s involvement in any potential collusion or conspiracy to seek Russian help, illegal Russian help, during the campaign,” Schiff recently said.

Democrats have named more than 40 witnesses who the GOP-led committee declined to question, but who the committee may seek to interview under Democratic control. They include Kellyanne Conway, who appears to have been in touch during the campaign with a Republican political operative, Peter Smith, who attempted to get in contact with Russian hackers he believed were in possession of emails that Hillary Clinton deleted from the private server she used while Secretary of State. Smith committed suicide last year before news of his activity broke. The list of possible witnesses also includes White House aide Stephen Miller, former White House spokesman Sean Spicer, former White House Chief of Staff Reince Priebus, and many more.

Democrats could also subpoena Dimitri Simes, a former Nixon aide and CEO of the Center for the National Interest, which hosted an April 27, 2016 foreign policy speech by Trump at Washington’s Mayflower Hotel. Democrats in their March memo said that the committee “has reason to believe that Mr. Simes played a central role in drafting portions of the speech related to Russia.” Simes maintained close contact with Maria Butina, the Russian gun rights enthusiast indicted and jailed for acting as an unregistered foreign agent. Democrats have said they want Simes’ correspondence with the Trump campaign and with people close to the Russian government.

The Intelligence Committee will work to protect the Mueller’s investigation, Schiff says. Trump on Wednesday ousted Attorney General Jeff Sessions and announced the installation of Sessions’ chief of staff, Matt Whitaker, as acting attorney general, with responsibility for overseeing the Special Counsel. In past radio and TV appearances before joining the Justice Department, Whitaker has attacked Mueller’s probe and stated that there was no evidence to support the fact that Russia had intervened in the 2016 election.

“Interference with the Special Counsel’s investigation would cause a constitutional crisis and undermine the rule of law,” Schiff said in a statement last week. “If the President seeks to interfere in the impartial administration of justice, the Congress must stop him. No one is above the law.”