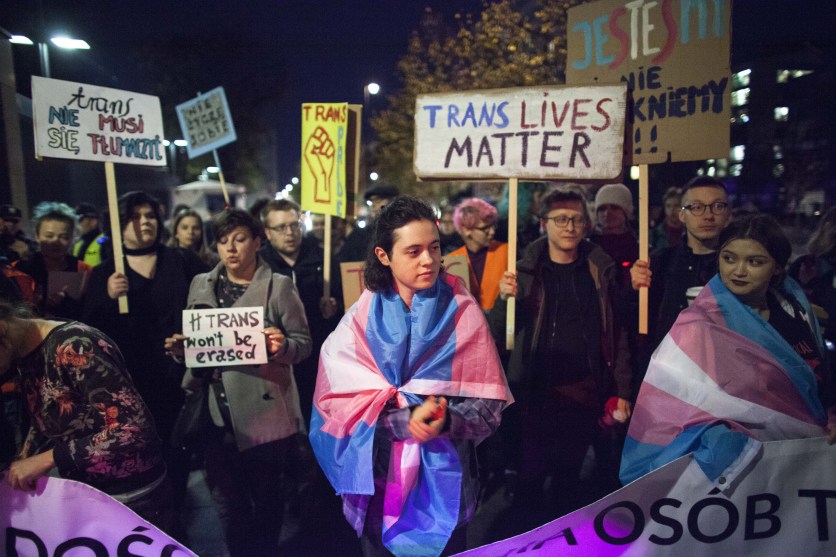 Last summer, almost 300 people gathered on one of Chicago’s northern lakeside beaches. The conditions were perfect: sunny, clear, and 90 degrees. Beach parties by Lake Michigan are a time-honored tradition during Chicago summers, but this one was different. Hosted by the Trans Liberation Collective, this was a rare opportunity for members of Chicago’s trans community to meet, revel, and be their authentic selves.

“The yearly beach party is a time to see parts of the community that I rarely have a chance to see during the year,” says Jackie Morey, who is a 23-year-old Chicago resident. “A great many TGNC [trans and gender non-conforming] folks live both busy and/or impoverished lives, and building a wide social network can be exhausting and expensive.” Morey noted that in this community, where socializing can often create great insecurities, “the beach party provided a space to feel safe.”

Today is the Trans Day of Remembrance, a day to mourn and remember the lives taken by transphobic violence. In 1999, Gwendolyn Ann Smith, a trans woman of color, founded the Transgender Day of Remembrance as a vigil to honor the memory of Rita Hester, a trans woman murdered the year before. Ever since then, on November 20, communities participate in vigils, rallies, and protests. The conversation surrounding the rights of trans people, sometimes their very existence, has ramped up during the age of Trump, with increasing attacks on basic civil rights as well an uptick in the number of hate crimes. But as all this violence continues to take place, beach parties such as the one last summer in Chicago highlight some of the approaches organizations across the country are employing to fight transphobic violence and offer new community-building opportunities to members of the trans and gender non-conforming communities.

“We’re our own best advocates,” Lolan Sevilla, training coordinator at New York’s Anti-Violence Project tells Mother Jones. Two years ago, Sevilla, along with LaLa Zannell and Teal Inzunza, began the Trans Leadership Academy. This six-month program is designed to help trans people learn civics and leadership skills while doing paid internships at organizations like Destination Tomorrow and AVP. The internships have been designed and vetted by the staff so they further support what students learn in the program. Recently, about 30 people applied for the academy. Six of eight graduates from last year went on to paid gigs in a variety of organizations, such as Destination Tomorrow, a Bronx-based LGBTQ organization. “I think especially now, when our lives are so targeted and policed and the only narratives we have in media are our deaths,” Sevilla says, “we find successes where we can. And that was a really powerful moment.”

“I think especially now, when our lives are so targeted and policed and the only narratives we have in media are our deaths, we find successes where we can. And that was a really powerful moment.”

Housing discrimination, difficult experiences with doctors, intense depression. These are a few of the barriers transgender Americans face in accessing and maintaining stability in everyday life. “Trans people exist on the fringes of society,” says Kylie Waddy, TGNC health coordinator at New York’s LGBTQ Community Center. And that can have severe, and sometimes deadly, consequences. Waddy, along with the center as a whole, invests in programs such as hiring events and economic justice workshops, which teach business school basics for securing and maintaining economic independence. In other cases, they provide access to a computer lab and a variety of youth support groups, all meant to combat the effects of social isolation.

After almost 20 years, those commemorating Transgender Remembrance Day acknowledge how things have changed, and for some, it’s not as meaningful as for others. “My relationship with Transgender Day of Remembrance has been a rocky one. I haven’t attended a TDOR event in the past few years because I don’t find that they deeply honor trans life,” writes Aaryn Lang about last year’s TDOR in Them. “What I often see are predatory nonprofits that capitalize off of the loss of bodies they wouldn’t employ, educate, or support, while reinforcing a narrative that makes ‘transgender’ and ‘death’ almost synonymous.” And it’s a sentiment shared by many in the trans community.

Sevilla says it best. “While I absolutely appreciate cisgender allies and co-conspirators as we’ve seen through many different movements throughout times, if the folks who are most directly impacted aren’t the ones that are driving the agenda, who’s really winning?”

These programs work because they’re by trans people, for trans people—authentic. “It is one of the few places that I felt comfortable and safe swimming in the attire that affirmed my gender,” says Jes Scheinpflug, recalling the Chicago beach picnic. “I think that people, mostly white people, often conflate safety and comfort, so when I say I felt both, it’s a powerful statement for me.”