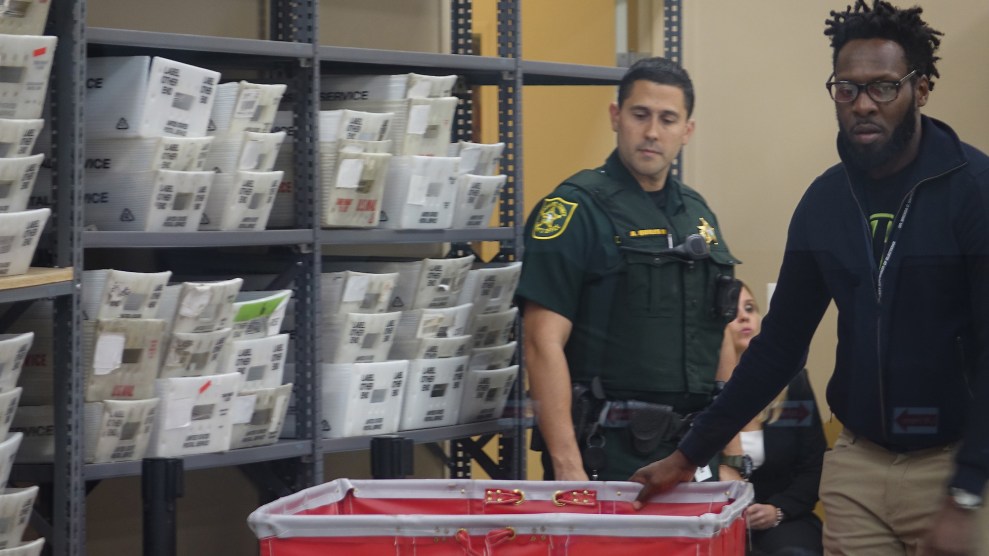 A Florida judge on Monday rejected Republican Senate candidate Rick Scott’s attempt to impose new security measures on the contentious recount in Scott’s race and the state’s gubernatorial election, finding that there was no evidence of a shortage of security.

Instead, Chief Judge Jack Tuter of Florida’s 17th Circuit Court asked the Scott campaign and election officials to come to a voluntary agreement on security.

The proceedings on Monday came after the Scott campaign, along with President Donald Trump and other Republicans, sowed suspicions about fraud in the voting process in Florida, with particular focus on two Democratic-leaning counties, Broward and Palm Beach. The campaign petitioned for more security at the Broward County election headquarters, where a recount is underway, alleging that the integrity of the election is at stake. Among the campaign’s requests was that voting machines, tallying machines, and ballots be impounded when not in use in the recount to prevent tampering. Democrats fought the effort, arguing that it was a naked attempt to get a judge to lend validity to Scott’s unsubstantiated assertions of fraud.

But in court, the lawyer for Scott’s campaign, Jason Zimmerman, could offer little evidence that any fraud or irregularities had taken place. After more than an hour in court, the judge found no evidence to issue an order. Instead, he urged the elections supervisor and the Scott campaign to consider reaching an agreement to add more police officers watch the recount process at the Broward County elections headquarters. The two sides agreed Monday afternoon to add three sheriff’s department officers to monitor the process and guard election equipment—a small increase in security to a process that already has many layers of security and monitoring.

The Scott campaign’s case relied largely on past instances of administrative blunders by the Broward County’s longtime supervisor of elections, Brenda Snipes, including the fact that she failed to comply with an open records request from the Scott campaign last week regarding the election returns. She ultimately complied; as her lawyer, Eugene Pettis, pointed out in court on Monday, that request had demanded information within 24 hours in the midst of the ballot-counting process, making it hard to comply on schedule. Still, Scott’s attorney insisted that “past is prologue” and asked Tuter to issue an order bolstering security.

Leonard Samuels, an attorney representing the Florida Democratic Party, stressed that issuing an order would sow more distrust in the process. “The problem is, what is the perception going to be to the public if an injunction is entered impounding machines or something to that effect?” he said. “The public out there will think that something has gone untoward in this 2018 election.”

Samuels also stressed that the evidence was too weak to meet the legal threshold for a judicial injunction. “Your Honor, you’re going to need to make findings of fact if an injunction is issued, so let’s look at what you could possibly put in the record as to what has transpired in 2018,” he said. All there is, he said, was Zimmerman’s word.

Zimmerman’s emergency request for more security procedures, filed Sunday afternoon, had requested that voting machines, tallying machines, and ballots be impounded when not in use in the recount. But under questioning from the judge, it became clear that this would add little to the security procedures already in place. Instead, Zimmerman focused his request in court on distrust of the Broward County sheriff’s officers deployed to guard the vote-counting process because, he argued, they were under the operational control of the supervisor.

Attorneys for the elections supervisor stressed the rigorous security protocols already in place. Every step of the recount process is carried out under the supervision of the canvassing board—made up of two county judges and the supervisor—with multiple layers of security protocols and monitors from both parties and the press. As Pettis pointed out to the judge, Scott’s legal team had not raised its security demands with the canvassing board before coming to court. “They filed an emergency motion with you, despite the fact that they are in front of the canvassing board all day yesterday, [and]not once did that come up,” he said.

Aside from the legal battles over which ballots to count, the election in Florida has become a larger partisan fight over voting rights, with Republicans stoking fears of fraud and Democrats warning of voter suppression. The suspicions of fraud by the elections supervisor, pushed by Trump, Scott, and Sen. Marco Rubio (R-Fla.), have now become the grounds upon which the Scott campaign is asking for additional security. They also factored into Tuter’s decision to urge the two sides to come to an agreement on increased security. He did so based not on evidence of wrongdoing or inadequate procedures, but because, he said, “I believe there needs to be some additional layer of confidence.”