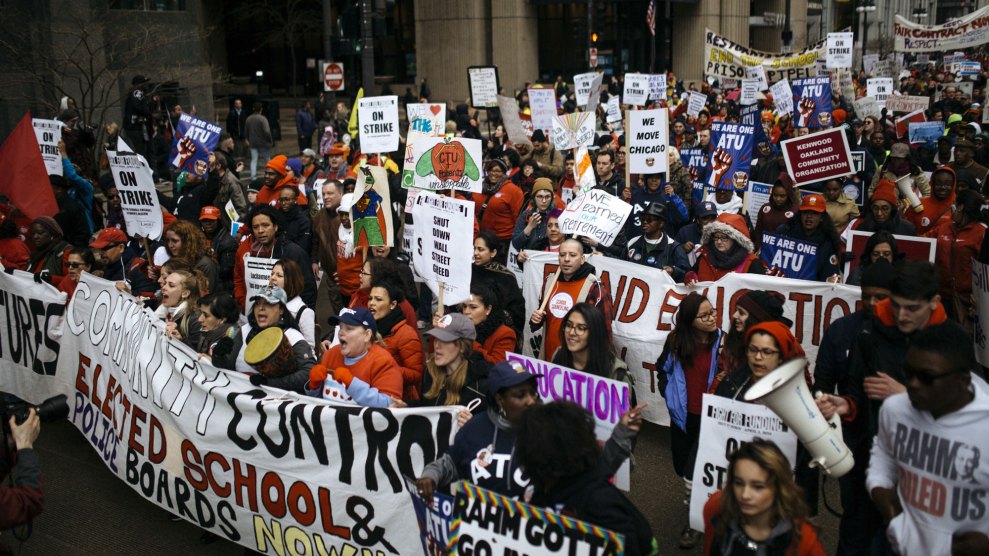 Protesters take to the street in Chicago during a one-day strike in April 2016. Chicago teachers demanded demanding that lawmakers provide the funding needed for proper education and other programs. Jim Vondruska/NurPhoto/ZUMA

For the last five years, Martha Baumgarten has taught fifth-graders at Carlos Fuentes Elementary School, a charter school on Chicago’s North Side. She started working at the school because of its commitment to helping Latino students, but every year her classes have been overcrowded, even by city standards. This year, she has 32 students.

“That a lot of fifth-graders in one room. It’s not what’s best for kids,” Baumgarten says, noting that some of her colleagues have left for traditional public schools in the city and surrounding suburbs, where wages are higher and class sizes lower. “It’s not an environment where I can do my job as a teacher.”

Carlos Fuentes Elementary is one of the 15 campuses run by Acero Schools, one of Chicago’s largest charter networks. In their latest contract negotiations, Acero teachers like Baumgarten have pushed for smaller class sizes, higher pay, more teacher diversity, and more special-education resources. If their demands aren’t met, 500 teachers, counselors, and other staffers are threatening to walk out starting December 4 in what’s being touted as the country’s first major charter school teacher strike.

“We’re ready to fight,” Baumgarten says, “until the very end.”

Five hundred teachers, counselors, and other staffers are threatening to walk out starting December 4 in what’s being touted as the country’s first major charter school teacher strike.

The first-of-its-kind work stoppage would come on the heels of massive statewide teacher walkouts in West Virginia, Oklahoma, Arizona, Colorado, Kentucky, and North Carolina earlier this year—protests that Baumgarten says served as a “rallying cry” for her Acero colleagues. And since the beginning of the school year, teachers in both Los Angeles and Oakland have threatened to strike over ongoing contract disputes.

But what makes the potential Acero strike different is that, unlike at traditional public schools, where 70 percent of teachers are in a union, just 11 percent of charter school teachers are unionized. Across the country, 781 of the roughly 6,900 charter schools (11 percent) had collective bargaining agreements with teachers unions, according to the National Alliance of Public Charter Schools. In Chicago, educators at more than a quarter of charter schools—34 of the city’s 128 campuses—have unionized.

Earlier this year, charter school teachers represented by the Chicago Alliance of Charter Teachers and Staff merged with the Chicago Teachers Union. Chris Baehrend, chair of CTU’s charter division, noted that charter school networks received 8 percent more in per-pupil funding compared to Chicago’s district schools, and that teachers’ salaries were up to 30 percent less than those of their district peers. The Chicago Sun-Times reported in October that Acero CEO Richard Rodriguez acknowledged to Acero’s school board that his teachers were paid less than district teachers but disputed the claim that Acero schools received more funding than Chicago district schools. “Unlike CPS, we don’t have a rich uncle. Acero Schools operates more like a household that must budget,” Rodriguez said.

“We need to change the way that the charter industry works.”

Still, Baehrend says that innovation in the charter school sector should not mean paying teachers less while “private companies line their CEOs’ pockets with our tax dollars.”

“We need to change the way that the charter industry works,” says Baehrend, who is on leave from his time as an English teacher at Latino Youth High School to work with CTU. “Traditionally, we’ve had less rights, less pay, and less benefits. At the end of the day, these are our schools. We are increasing our militancy because we know that our demands are possible for our bosses. They are right for our students. If we are willing to fight to the point of close our schools down, we will win those rights. We are united in forcing our employers to do the right thing.”

An Acero strike would affect about 7,500 students. Recent history suggests a last-minute deal could still be an option: In 2016, during their last labor negotiations, Acero teachers voted to strike, but a last-minute deal with the network, then known as UNO, kept schools open. But if the two sides can’t come to an agreement, Acero teachers may set an example for other charter school educators pushing for better pay and conditions. In some ways, they already have: Days after Acero teachers approved a strike, educators at four Chicago International Charter School campuses voted to also strike, though no date has been set.

“If we have to strike,” Baehrend says, “it’s going to change the way people think about charter schools.”