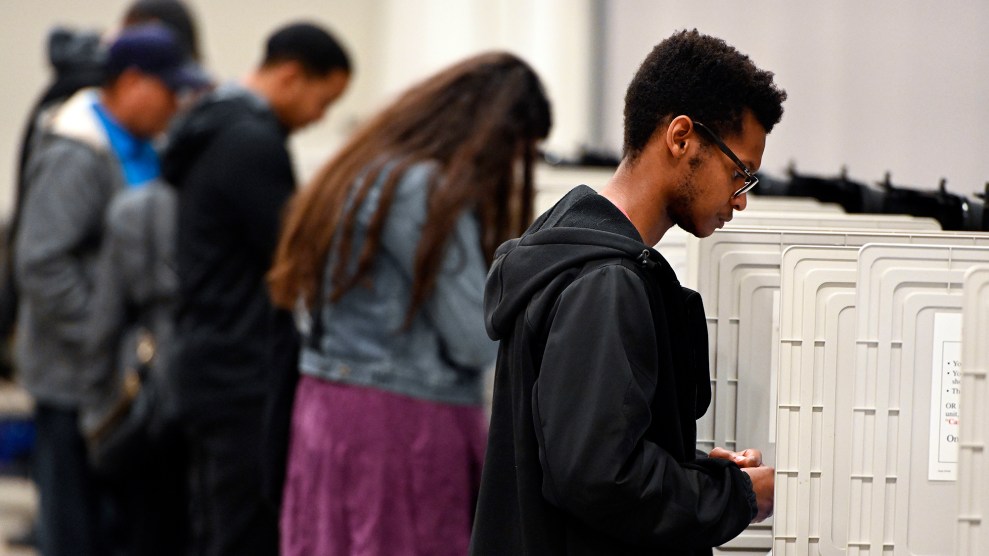 Thousands of eligible voters in Georgia who were blocked from registering to vote must be allowed to cast a ballot in the 2018 midterm election next week, a federal court ruled on Friday. The decision could have a big impact on the incredibly tight race for governor that has been marred by Republican voter suppression efforts.

More than 50,000 voters in the state have had their voter registration applications put on hold by Georgia Secretary of State Brian Kemp, who is running for governor against Democrat Stacey Abrams, because information on their registration forms didn’t exactly match state databases. This court case deals specifically with more than 3,000 of those voters, who were flagged as “non-citizens” because their citizenship status hadn’t been updated in state databases when they became US citizens. District Court Judge Eleanor Ross, an appointee of Barack Obama, ruled that there was “a very substantial risk of disenfranchisement” for those voters wrongly flagged as non-citizens and that they must be able to cast a ballot in 2018.

In Georgia, legal permanent residents are able to obtain a driver’s license, but when they become US citizens, their citizenship information is not automatically updated in state databases. So when they go to register to vote, these naturalized citizens are sometimes wrongly flagged as non-citizens. These eligible voters are supposed to be given a ballot if they show up at the polls with proof of US citizenship, but that policy hasn’t been fairly enforced in Georgia, the court found following a legal challenge against Kemp filed by voting rights groups, including the Lawyers Committee for Civil Rights and Campaign Legal Center, on October 19.

In her ruling, Judge Ross cited the example of an Israeli-born voter named Yotam Oren who became a naturalized US citizen last year, but was turned away from the polls earlier this month:

Prior to voting early in the November 6, 2018 election, Mr. Oren checked Defendant Kemp’s Secretary of State website, which informed Mr. Oren that he could vote if he brought proof of citizenship to the polling station. On October 16, 2018, Mr. Oren went to his designated early-voting polling location in Fulton County. He checked in with a poll worker and showed her his valid United States passport as proof of citizenship. The poll worker directed Mr. Oren to another election official, who informed Mr. Oren that she would need to call yet another person to change his status from “pending” to “active” so that he could vote. While Mr. Oren waited, the official was unable to reach the intended person on the phone and informed Mr. Oren that he could continue to wait or come back another time to vote. No one offered Mr. Oren an option to cast a provisional ballot. Mr. Oren did not want to wait any longer and left.

“This entire experience was unnecessarily time-consuming, confusing and frustrating,” Oren told the Atlanta Journal Constitution. “I imagine that many ‘pending’ voters would give up and not vote when faced with the same barrier I encountered when I tried to vote the first time as a United States citizen.”

The ruling could provide a major boost to Abrams, who is garnering strong support from minority voters in her bid to become the first black woman governor in US history.

Other eligible voters who have been put on the state’s pending registration list for reasons other than citizenship can vote in-person Tuesday if they bring a valid photo ID with them. Even still, voting rights advocates are worried that those who receive a letter informing them that there is a problem with their registration may be discouraged from showing up to vote, or that their ballots will be improperly rejected by election officials.

The order Friday is the second time in recent weeks that a federal court has ruled against Kemp’s efforts to make it more difficult to vote. On October 24, the court ruled that Georgia counties could not throw out absentee ballots because the signature on the ballot didn’t match the voter registration form. “The Court does not understand how assuring that all eligible voters are permitted to vote undermines integrity of the election process,” wrote Judge Leigh Martin May, who serves alongside Ross.