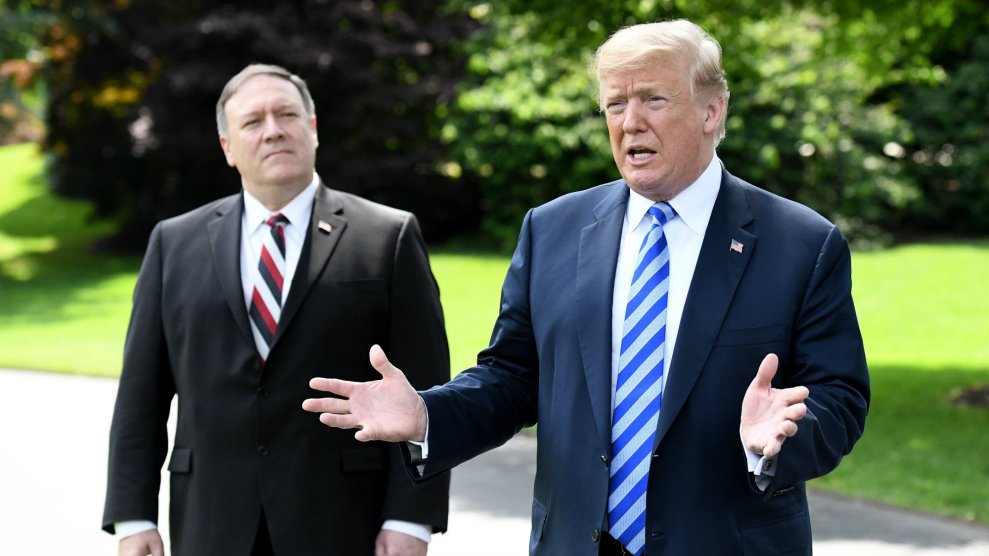 On Thursday morning, Secretary of State Mike Pompeo, after meeting with President Donald Trump, said that before deciding on how to respond to the crisis, the United States will give Saudi Arabia a few more days to “conduct a complete, thorough investigation” into the disappearance—and likely murder—of Jamal Khashoggi, a journalist and American resident. This was consistent with the easy-on-Riyadh line that Trump and Pompeo had been taking. On Wednesday, Pompeo told reporters that he was waiting for the Saudis—who already apparently lied about the case earlier when they insisted that Khashoggi had left their consulate in Istanbul—to do their thing: “We’re going to give them the space to complete their investigations of this incident, and when they issue their reports, we’ll form our judgment.” And Trump—who initially cautioned against blaming the Saudis for Khashoggi’s disappearance—has also indicated that he is content to sit back and wait for information from the Saudis before reaching any conclusions.

All this give-the-Saudis-a-chance talk ignores a key player in the case: US intelligence. Trump and Pompeo are acting as if they have no independent information of their own. But they do: intelligence from US agencies. There is no question that the CIA and the NSA—and perhaps other intelligence services—have collected information on the Khashoggi case through all the obvious means, including liaison with Turkish intelligence, communications intercepts, and perhaps “humint”—what spies call intelligence gained from confidential sources. The New York Times has reported that US intelligence officials “say they have growing circumstantial evidence that [Saudi] Crown Prince Mohammed bin Salman [who is often referred to as MBS] was involved in the disappearance of Mr. Khashoggi, who entered the consulate in Istanbul more than two weeks ago to obtain a document for his coming wedding and did not emerge.”

In such a high-profile international episode, US intelligence would be flooding the president with whatever information it can gather. Former intelligence and national security officials note that Trump need not wait for details from the Saudis to make a determination of what happened—and what to do. “I think we all have more or less a clear view of what happened, based on what the Turks have leaked and what the press has been able to confirm regarding the identities and roles of the Saudi operatives involved, and bearing in mind other evidence of how the Saudi regime under MBS has handled dissident voices,” Paul Pillar, a longtime CIA official who was once the national intelligence officer for the Near East and Southeast Asia, tells Mother Jones.

Pillar explains that US intelligence officials, using pubic information and secret material, would be presenting Trump with their best takes on what occurred. “Analysts inside the US intelligence community, even just based on this [public] information, probably would be able to make an assessment with fairly high confidence that Khashoggi was killed in an operation authorized at the highest levels of the Saudi regime,” Pillar says. Yet, he adds, “Such an assessment might still leave a bit of wiggle room, allowing for a lesser probability of some other scenario—and the White House might seize on any such wiggle room in justifying the inaction that they so patently prefer.”

“Such an assessment might still leave a bit of wiggle room, allowing for a lesser probability of some other scenario—and the White House might seize on any such wiggle room in justifying the inaction that they so patently prefer.”

Antony Blinken, a former deputy secretary state in the Obama administration, also says that at this stage the intelligence community would probably have a good line on what happened to Khashoggi and the Saudi role: “Pretty strong likelihood yes—not a certainty but high probability.”

John McLaughlin, a former acting CIA director in the George W. Bush years, notes that the intelligence community would certainly be scooping up whatever it can find. “I’m sure Trump has everything the IC knows and thinks,” he adds. McLaughlin points out that the combination of publicly reported information and gathered intelligence probably has yielded a “circumstantial” case of high-level Saudi involvement in Khashoggi’s disappearance “but strongly so.” After receiving preliminary intelligence like this, other presidents”would have not tipped so early toward defending the Saudis,” he says, “and would have remained more circumspect publicly than Trump while putting huge pressure on them privately.”

By this point in a foreign policy crisis, the intelligence community, Pillar says, will generally provide the president with likely scenarios—say, the likelihood that this was an operation officially sanctioned by the Saudi government, the probability that bin Salman was directly involved, the possibility that he only learned of this after the fact, and so on. And it would continue to update its assessment, as new intelligence and public reports emerge. “Whatever information not in the public domain that the US intelligence community has obtained either through liaison with Turkey or through their own unilateral sources could strengthen the confidence of any assessment the community makes,” Pillar explains.

For the past few days, Trump and Pompeo have acted as if they are mere bystanders dependent on the Saudis and the Turks to conduct their respective investigations and report in. But that is more of a cover story. Public reports already indicate that Khashoggi was murdered and his body dismembered, with the involvement of Saudi officials closely tied to MSB. US intelligence services certainly can match (and evaluate) this reporting and go much further.

Trump and Pompeo are operating as if they are in an intelligence-free zone. Pompeo, who on Tuesday convivially met with bin Salman, has called for patience, highlighting the need to be “mindful” of Washington’s “long strategic relationship with Saudi Arabia.” And Trump, who has had business relations with the Saudis, has tweeted approvingly that Pompeo “is waiting for the results of the investigations being done by the Saudis and Turkey.” Yet scores, if not hundreds, of people within the US intelligence community are working feverishly to inform Trump and Pompeo of what transpired in the Saudi consulate—and what went on before and after.

The notion that Trump needs to wait on the Saudis comes across as an effort to buy MSB time to figure out how to handle this horrific mess. But as Trump has demonstrated before, when it comes to awful misdeeds committed by authoritarians he fancies, he can be more inclined to believe the perp than the public servants who work for him.