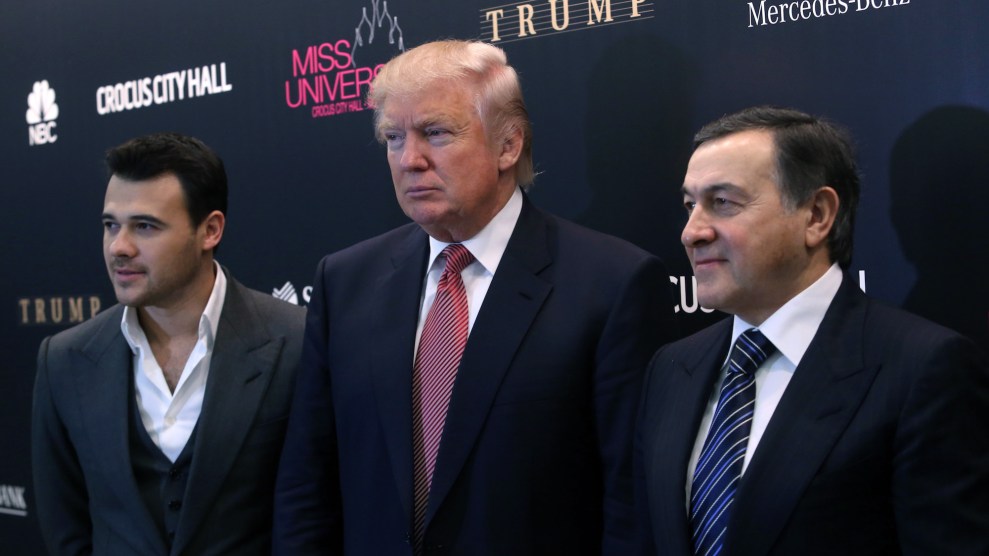 Union Bank and other unidentified institutions closed accounts used by Agalarov’s development company, the Crocus Group, after BuzzFeed reported in September on suspicious activity by the accounts, according to a Russian news report from Friday and to Agalarov’s US lawyer, Scott Balber. BuzzFeed’s articles describe suspicious movement of funds from Russian accounts to US accounts around the time of the June 9, 2016, meeting at Trump Tower in which a Russian lawyer offered dirt on Hillary Clinton, as well as transactions a few weeks after Trump’s surprise election win on November 8, 2016.

The Russian publication, RBC, reported that the Crocus Group received a letter from Union Bank asking about suspicious transactions within 10 days of a September 21 BuzzFeed article.

The BuzzFeed reports about Agalarov’s accounts were among a series of articles citing confidential suspicious transaction reports related Russian interference in the 2016 election. The appearance of the sensitive information led to the Justice Department arrest of Natalie Edwards, a senior adviser at the Treasury Department’s Financial Crimes Enforcement Network, on October 17 for illegally leaking confidential reports on financial transactions.

“A number of accounts were closed by financial institutions because of the illegal dissemination of confidential banking information by a US Treasury official to a BuzzFeed reporter,” Balber wrote in an email to Mother Jones. Balber, who did not respond to requests for clarification to his email response, did not make it clear if the accounts were closed because of their involvement in the alleged leaks or because of the suspicious transactions themselves. But the accounts were reportedly closed weeks before Edwards was arrested, indicating the banks reacted to the coverage of the suspicious activity, rather than to Edwards’ arrest.

“We are cooperating with federal prosecutors regarding their continued investigation into this misconduct,” Balber said.

It is not clear if Agalarov, a Russian construction magnate with Kremlin connections, can still conduct transactions in the United States. It’s also unclear if the account closures will affect a music tour by Emin Agalarov, Aras’ son and an aspiring pop singer, that is scheduled for next year and includes stops in New York, Los Angeles, Denver, and Miami.

Citing transaction reports that were compiled by banks and law enforcement officials after news of the Trump Tower meeting broke last year, BuzzFeed reveals that 11 days after the meeting, on June 20, 2016, Agalarov used a company based in the British Virgin Islands to send $19.5 million to an account at Morgan Stanley. That day, a business tied to Crocus International also sent $43,000 to the same Morgan Stanley account.

The article also notes that banks flagged as suspicious 19 wire transfers from Russia to a checking account controlled by Emin Agalarov. Those transfers, which began 13 days after election day, totaled $1.2 million, according to the story. Some of the money, $107,000, was then transferred from Emin Agalarov’s checking account to an account run by Irakly “Ike” Kaveladze, a longtime US employee of Aras Agalarov. A follow-up report from BuzzFeed says Citibank, JP Morgan Chase, and Morgan Stanley had flagged as suspicious an additional $3.3 million in transfers in June 2016 from Emin Agalarov to Kaveladze.

Kaveladze, who attended the Trump Tower meeting, was once investigated for money laundering due to his role helping to set up more than 2,000 Delaware corporations through which about $1.4 billion dollars from Eastern Europe and Russia were moved through US bank accounts in the 1990s. An investigation in 2000 led by then-Sen. Carl Levin called Kaveladze a “poster child” for the practice of using anonymous US shell corporations to launder “ill-gotten gains.” At the time, Kaveladze ran a company that boasted Agalarov’s company, then called Crocus International, as its largest client.

Balber told BuzzFeed that all of the transactions detailed in the September story were for legitimate business purposes. He declined to specify those purposes.

In 2013, Aras Agalarov partnered with Trump to host the 2013 Miss Universe pageant in Moscow. The men also formed plans, never realized, to partner on building a Trump Tower in Moscow.

But Agalarov used the connection in 2016, when a publicist for Emin contacted Donald Trump Jr. to set up a meeting. The email from the publicist, Rob Goldstone, said the meeting would be used to pass along damaging information about Clinton provided by a top prosecutor in Russia and was “part of Russia and its government’s support for Mr. Trump.” Trump Jr. famously responded eagerly: “If it’s what you say I love it.” At the meeting, a Russian lawyer, Natalia Veselnitskaya, outlined supposed damaging information on Clinton to Trump Jr., Trump’s son-in-law Jared Kushner, and Paul Manafort, who a few weeks later became campaign chairman. The Trump officials have since said they were not interested in what the lawyer had to offer.

With reporting from Hannah Levintova.