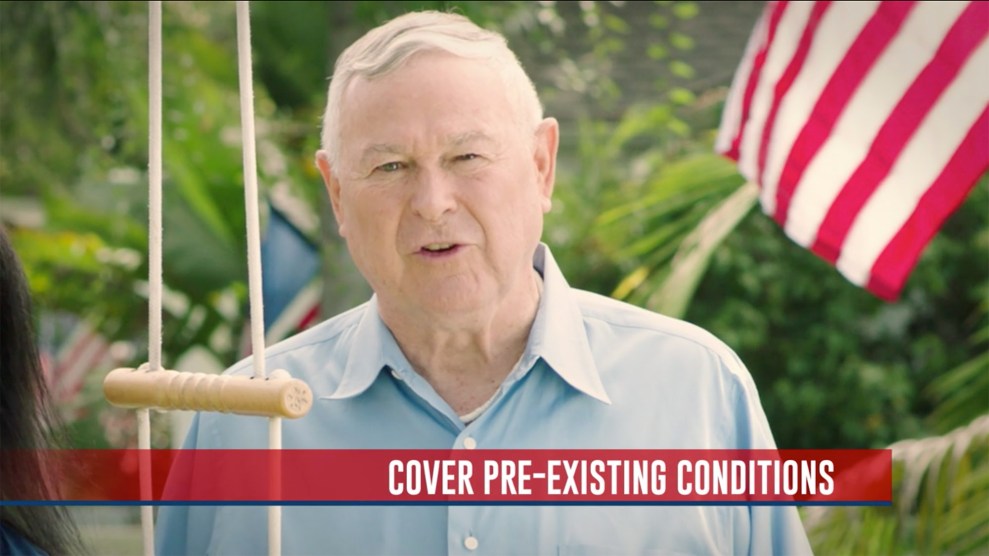 Rep. Pete Sessions, a Texas Republican who’s facing a tight race to keep his seat outside Dallas, has thrown his weight behind protecting insurance coverage for people with preexisting health conditions—after a long history of voting to undo such protections. In late September, Sessions introduced a resolution calling on his colleagues to “preserve patient protections, especially ones to prevent anyone from discriminating against patients with pre-existing conditions” even if they repeal the Affordable Care Act (ACA).

“It is painfully obvious that Obamacare has failed the American people,” Sessions said in a statement accompanying his resolution. However, he didn’t mention that the ACA (also known as Obamacare) enacted those protections in the first place—or that he’s repeatedly voted to undermine or undo key parts of the healthcare law, starting with his 2011 vote for the Repealing the Job-Killing Health Care Law Act.

Session is one of several Republicans in competitive races who have taken to defending one of Obamacare’s most popular provisions as the midterm elections approach. His resolution’s 18 cosponsors include Rep. Leonard Lance (R-N.J.), a five-term incumbent in the midst of a toss-up reelection campaign, and Rep. Kevin Cramer (R-N.D.), who is running neck and neck against Democratic Sen. Heidi Heitkamp for her seat. Rep. David Young (R-Iowa) and 27 cosponsors have also introduced a similar resolution aimed at shielding protections for preexisting conditions from Obamacare repeal. And in recently released TV ads, Young and Rep. Dana Rohrabacher (R-Calif.) claim they’re standing up to their party by fighting to protect coverage for people with preexisting conditions.

For me, healthcare is personal. When it comes to preexisting conditions I'm using my heart as well as my head, advocating a creative bi-partisan approach. https://t.co/nVYq3iKRqI pic.twitter.com/d2McgjE5Zg

The ACA is a boon for patients with preexisting conditions, says Sarah Lueck, a senior policy analyst at the Center on Budget and Policy Priorities. “If you had a preexisting condition, before the ACA, you would have faced problems in most states buying a plan,” Lueck says. Obamacare gave people buying private insurance “a number of consumer protections and benefits standards that didn’t exist before,” including guaranteed access to coverage and standard premium rates regardless of their health.

By supporting this key provision of Obamacare while simultaneously trying to repeal the law, Sessions and other Republicans (including President Donald Trump) seem to want to have their cake and eat it too. In addition to voting to repeal various provisions of the ACA, Sessions is the author of the World’s Greatest Healthcare Plan of 2017, which would have repealed the law’s individual mandate and its requirement that large employers offer affordable coverage to full-time employees. (The bill is still lingering in subcommittee; the individual mandate was effectively killed last December when the Republican tax plan was signed into law.)

In May 2017, Sessions voted for the American Health Care Act, a Republican bill designed to replace Obamacare. He called it “not perfect” but “far superior to the health care system we have now.” As Matt Fiedler, a health care analyst for the Brookings Institution, told PolitiFact, the AHCA would have resulted in higher premiums for patients with preexisting conditions.

Sessions now finds himself in a highly competitive race against Colin Allred, a civil rights attorney and former NFL player. When Sessions cast his “aye” vote for the AHCA, Allred eviscerated him. “We don’t believe in taking health care away from our neighbors to score political points,” Allred tweeted. In a new TV ad, Allred slams Sessions’ record on health care: “When you see him cast a vote to remove preexisting conditions…I don’t think that’s who we are here in north Texas.” The latest New York Times/Siena College poll had Sessions up just one percentage point over Allred.

In his ad, released on October 3, Rohrabacher says that health care is “personal” for him because of his daughter’s battle against leukemia. As his family is shown walking across a beach, he says, “For her and all our families, we must protect America’s health care system. That’s why I’m taking on both parties and fighting for those with preexisting conditions.” Yet he also voted for the AHCA and has voted to repeal Obamacare numerous times. Harley Rouda, his Democratic challenger, has called him out for making a “boldly deceptive claim.”

Young’s recent ad features two constituents, one of them blind, who recount how Young listened to their concerns. A voiceover says, “David [Young] stood up to his party to protect Iowans with disabilities and preexisting conditions.” When Young voted for the AHCA, he issued a statement saying that the bill would help bring about a health care system that “protects Americans with pre-existing conditions.”

Preexisting conditions have become a flashpoint between Young and his Democratic challenger, Cindy Axne, who has said Young “lies about his record of voting to take away protections for Iowans with pre-existing conditions.” The Des Moines Register notes that Young’s claim that he stood up to his party is based on his cosponsorship of a 2017 amendment to the AHCA, which would have sent $8 billion to states to help patients whose insurance premiums were raised because of their preexisting conditions. It is unclear how much the additional funding would have helped if the AHCA had passed.

Meanwhile, there’s been a push in the Senate to shield protections for preexisting conditions from ongoing efforts to sink Obamacare. In August, 10 Republican senators introduced the Ensuring Coverage for Patients with Pre-Existing Conditions Act, which would amend the Health Insurance Portability and Accountability Act to prevent insurers from establishing eligibility rules based on factors like health status, medical history, and evidence of insurability. The bill’s sponsors explicitly say the legislation would guarantee equal health coverage regardless of preexisting conditions. The bill was introduced as a response to a lawsuit filed by Texas and 19 other states arguing that the entire ACA is unconstitutional. “If the judge rules in favor of the plaintiffs, protections for patients with pre-existing conditions could be eliminated,” the senators wrote.

Lueck says the Senate bill would still harm those patients. The proposed legislation would allow insurers to investigate patients’ health histories and exclude coverage for preexisting conditions entirely. “Support for dismantling these protections in whole or in part is not compatible with support for ‘maintaining coverage for pre-existing conditions,'” she wrote in a recent commentary. In short, “Policymakers can’t have it both ways.”