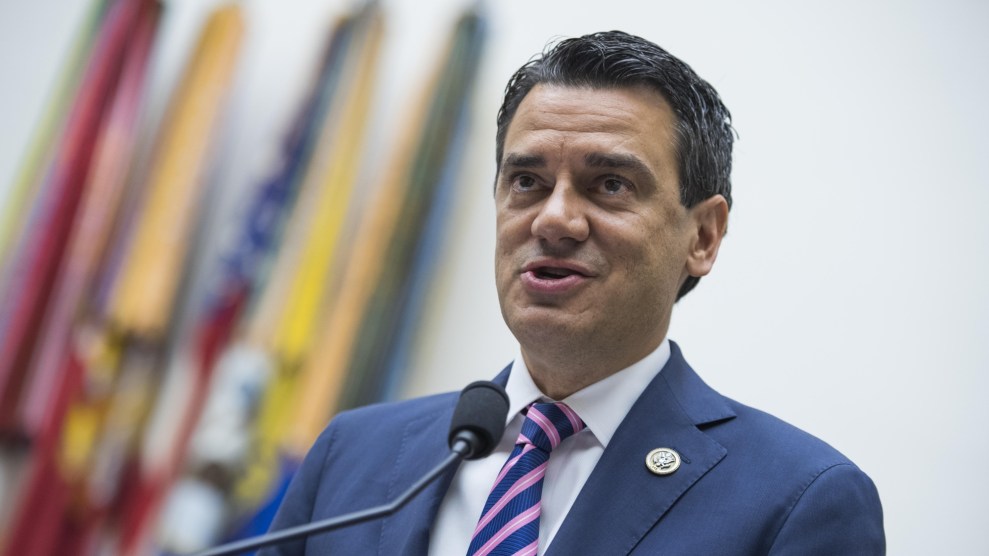 Kevin Yoder, a Republican congressman who is facing a tough reelection battle in Kansas’ 3rd Congressional District, is criticizing his Democratic opponent, Sharice Davids, for failing to stand up to President Donald Trump—even though Yoder himself consistently votes with Trump and carries the president’s endorsement.

Congressman @KevinYoder has fought hard for the People of Kansas. Highly respected, strong on Crime, the Border, Military, Vets and Second Amendment. Kevin has my Total Endorsement!

“What is it in her track record that tells us she would actually stand up to President Trump when she worked for him?” Yoder said in a story in the Kansas City Star last week. “She worked for the agenda. I just think it seems to be a pretty weak promise…when she already had a chance to do it and she didn’t.”

Yoder is referring to Davids’ participation in the prestigious, yearlong White House fellowship program. Although her fellowship began in August 2016, while former President Barack Obama was in office, it continued into the Trump administration. Davids dismissed the claim to the Star, and a University of Kansas political scientist pointed out in the article that the fellowship in question is essentially a “nonpartisan internship.”

Davids is an openly gay professional mixed-martial arts fighter who hopes to become the first Native American woman elected to Congress. She’s a Democrat who supports Medicaid expansion and gun control and has been critical of Yoder’s support for the president and of Trump himself. Yoder, on the other hand, has voted with Trump 92 percent of the time, according to FiveThirtyEight, and was first endorsed by the president in July after he included $5 billion for a border wall in the Department of Homeland Security budget bill in his capacity as chair of the Homeland Security appropriations subcommittee.

Thank you to Congressman Kevin Yoder! He secured $5 BILLION for Border Security. Now we need Congress to support. Kevin has been strong on Crime, the Border, the 2nd Amendment, and he loves our Military and Vets. @RepKevinYoder has my full and total endorsement!

Yoder preemptively defended himself, telling the Star that he protested the family separation policy in the DHS congressional committee. However, as McClatchy notes, Yoder ultimately voted for a hardline immigration bill, sponsored by Rep. Bob Goodlatte (R-Va.), later that week.

In the candidates’ first and only debate before the midterms Tuesday, Yoder made a point of saying he’s willing to stand up to Trump when he disagrees with him. He then accused Davids of “rooting against” Trump—despite his earlier criticism that she wouldn’t stand up to him. Davids shot back by saying Yoder “votes with this president through thick and thin.”

According to the most recent polling, Davids leads Yoder by 9 points. The Kansas district was the only one in the state to narrowly voted for Hillary Clinton in the 2016 presidential election.