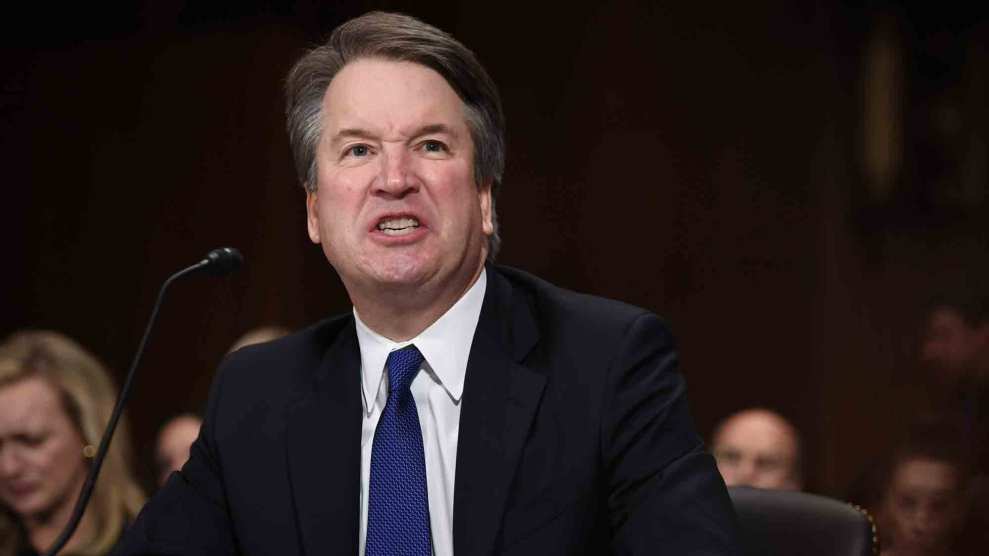 At Thursday’s historic and dramatic Senate Judiciary Committee hearing, Judge Brett Kavanaugh issued a fiery and angry response to the testimony of Christine Blasey Ford, who has accused him of sexually assaulting her more than three decades ago. An upset Kavanaugh—who alternated between bursts of belligerence and tear-suppressing sniffles—assailed the hearing as “a calculated and orchestrated political hit.” He railed against “outside left-wing opposition groups” and claimed this “circus” was a Democratic plot fueled by “revenge on behalf of the Clintons,” whom he investigated in the 1990s. When questioned by Democratic senators, Kavanaugh was contentious, argumentative, and combative.

Kavanaugh’s performance at the hearing immediately raised questions about his judicial temperament. During his first set of confirmation hearings, Kavanaugh had declared, “The Supreme Court must never, never be viewed as a partisan institution.” Yet here he was now, hurling politicized vitriol. Judith Resnik, a law professor at Yale, told the New York Times his remarks were “partisan and not judicious.” And legal experts quickly began discussing whether Kavanaugh—whose previous work for independent counsel Kenneth Starr and the George W. Bush administration had already cast him as one of the more partisan federal judges—could be a fair-minded and politics-free arbiter as a Supreme Court justice.

Judicial temperament—and its importance—is a topic much discussed by legal mavens. One described it this way: “Judicial temperament, at its best, is a form of restraint that appears as an even-handedness of vision, a thorough-going fairness that eschews anger in favor of reason and clings to respect of all parties as an essential ingredient for the operation of justice.” Certainly, Kavanaugh’s testimony did not meet those standards.

And Kavanaugh’s appearance might not have met his own standards for judicial temperament.

In 2015, Kavanaugh gave a speech—titled “The Judge as Umpire”—at the Columbus Law School at Catholic University. It was during this event that he now-infamously said, “What happens at Georgetown Prep stays at Georgetown Prep.” But later in the speech, Kavanaugh explained the importance of judicial temperament. He described the attributes required for a “good judge”: to have the “proper demeanor,” to keep “our emotions in check,” to be “calm amidst the storm,” and to “demonstrate civility.” And, Kavanaugh added, “Don’t be a jerk.”

Here’s what he said:

To be a good judge and a good umpire, it’s important to have the proper demeanor. Really important, I think. To walk in the others’ shoes, whether it be the other litigants, the litigants in the case, the other judges. To understand them. To keep our emotions in check. To be calm amidst the storm. On the bench, to put it in the vernacular, don’t be a jerk. I think that’s important. To be a good umpire and a good judge, don’t be a jerk. In your opinions, to demonstrate civility—I think that’s important as well. To show, to help display, that you are trying to make the decision impartially and dispassionately based on the law and not based on your emotions. That we’re not the bigger than the game…There’s a danger of arrogance, as for umpires and referees, but also for judges. And I would say that danger grows the more time you’re on the bench. As one of my colleagues puts it, you become more like yourself—and that can be a problem.

The Ford-Kavanaugh hearing was a highly charged event, and a challenging moment for them both. But that afternoon, Kavanaugh did not display the qualities he cited for a “good judge.”

Also in that 2015 speech, Kavanaugh made another key point: “First and most obviously,” a judge cannot be a “political partisan.” A jurist, he added, must “avoid any semblance of…partisanship.” At the hearing, Kavanaugh did not demonstrate the ability to put aside partisanship.

The Kavanaugh nomination now depends on what, if anything, the new (and limited) FBI investigation unearths. But the questions about his judicial temperament—justifiably triggered by how he handled himself at last week’s hearing—will linger and remain unresolved.