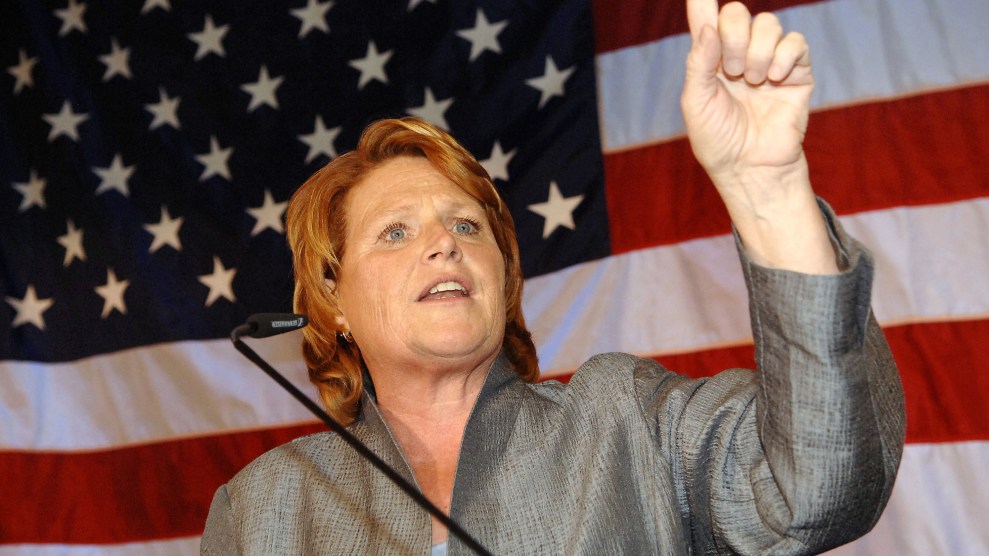 In 2012, Democrat Heidi Heitkamp won a razor-tight race in North Dakota for US Senate. Her victory was an upset in a state that regularly elects Republicans by wide margins. In the months and years that followed, North Dakota Republicans passed a wave of new voting restrictions—aimed, Democrats believe, at removing Heitkamp from office by suppressing turnout among Native American voters.

Six years later, Heitkamp is in a tough race for reelection. The two most recent polls show her Republican opponent, Rep. Kevin Cramer, with a double-digit lead. Heitkamp’s decision to vote against Brett Kavanaugh’s nomination to the Supreme Court was a risky move in a conservative state, and she may pay a price at the polls. But North Dakota’s new voter ID requirement could also hinder her ability to win next month by preventing thousands of Native Americans from casting ballots. Currently, thousands of Native American voters lack the ID now required to cast a ballot in the state. The Supreme Court recently upheld the implementation of the law. “Passed by North Dakota’s Republican-majority legislature almost immediately following Heidi’s victory in 2012, it’s no secret that North Dakota’s hyperpartisan voter ID laws target student and Native communities because they prefer Heidi in the US Senate,” Julia Krieger, communications director for Heitkamp’s 2018 campaign, recently told the Washington Post.

North Dakota has a history of disenfranchising Native American voters. In 1898, the state’s constitution granted the franchise only to those “[c]ivilized persons of Indian descent” who had ended all tribal affiliations. The North Dakota Supreme Court enforced this provision by requiring witnesses to attest that Native Americans attempting to vote “live just the same as white people.” As with Jim Crow voter suppression in the South, it took federal civil rights laws to remedy all the official limitations on Native American voting rights in North Dakota. While these legal barriers no longer exist, historical discrimination remains an obstacle to obtaining the identification now required to vote. According to a lawsuit seeking to overturn the ID law, the state’s Native American population has more than triple the unemployment rate and poverty rate of the rest of the state. Many Native American North Dakotans need to travel long distances to obtain a driver’s license or non-driver state ID but lack the transportation to do so.

North Dakota’s voting system is unlike that of any other state in one important respect: There is no voter registration. Voting precincts are small and hyper-local, and most poll workers know the people casting ballots in their precinct. Before 2013, voters presented identification only at a poll worker’s request. If a voter failed to present sufficient identification at the polls, a poll worker could vouch for the voter’s eligibility, or the voter could sign an affidavit swearing he or she was eligible. Native American voters have used this option at a far higher rate than white voters, according to court filings. But next month’s election will be the first in years without this option.

North Dakota passed the 2013 voter ID law (mostly along party lines) without any hearings or debate on the bill’s final text. It required voters to provide a driver’s license, state ID card, tribal ID, or another ID allowed by the secretary of state. In order to be valid, an ID needed to have a residential street address. This was a particular problem for Native Americans, who often lack a residential address and use P.O. boxes instead, because the US Postal Service does not deliver to some rural homes on tribal reservations. Though tribal IDs were technically an acceptable form of ID, those that listed a P.O. Box in place of a street address were not sufficient to vote. Around 5,000 tribal residents lack an approved form of ID.

In 2015, the state amended the law to make it even stricter, expressly prohibiting the use of student IDs and military IDs for all military members stationed in North Dakota and limiting the use of absentee ballots without ID. Expired IDs were also not accepted, and the secretary of state could no longer add to the list of acceptable forms of ID.

In January 2016, a group of disenfranchised Native Americans who had been unable to cast ballots in 2014 filed a lawsuit to stop the strict ID requirements. According to the suit, there is not a single site where a state ID can be obtained on a reservation. The case presented expert testimony finding that nearly 24 percent of the state’s Native American population lacked a required form of ID, twice the rate of non-Native American voters. Above all, the Native American plaintiffs protested the nearly insurmountable problem of the residential address requirement. The federal district court judge temporarily blocked the law, ruling that voters without ID could cast a ballot the old way, with an affidavit attesting to their eligibility.

Undeterred, the North Dakota Legislature amended its law for a third time in 2017. This time, it replaced the affidavit option with what it claimed was another failsafe: showing documents proving residency, such as a utility bill or paycheck, in addition to an ID. Again, voters challenged the law; if a Native American voter lacked a residential address, his or her utility bill or paycheck would be addressed to a P.O. Box. In 2018, federal judge Daniel Hovland issued an order that again tempered the effects of the law: “The State has acknowledged that Native American communities often lack residential street addresses,” he wrote in April. “Nevertheless, under current State law an individual who does not have a ‘current residential street address’ will never be qualified to vote.”

Instead of an affidavit, Hovland created a new backup option: Tribes could issue an ID with a home or mailing address to voters that must be acceptable at the polls. The ID could be as simple as a letter.

The state appealed Hovland’s ruling, and in September, the 8th Circuit Court of Appeals reversed the ruling and allowed the ID requirement to go into effect. The US Supreme Court let the 8th Circuit’s decision stand, over an impassioned dissent from Justice Ruth Bader Ginsburg.

The ruling was a major setback for Native Americans, but Hovland’s failsafe—the new tribal ID—was not challenged and remains an option for voters who lack an ID with a street address. With just weeks before the election and control of the Senate on the line, North Dakota’s tribes say they are working on a plan to make sure all their members can vote. According to the Post, tribal officials will stand outside polling locations on Election Day with laptops and access to rural addressing software to issue an address to any voter who needs one.

“Even if it doesn’t change the overall result, it’s about fighting back,” O.J. Semans, co-director of the Native American voting rights group Four Directions, told the Post. “We have to fight back.”

Matthew Campbell, an attorney with the Native American Rights Fund who represents the plaintiffs challenging the law, says in an email to Mother Jones, “The Tribes are working to ensure that these barriers are removed before the election, even though the state is not providing the Tribes with any resources to assist in ensuring voters can comply with state law. The legislature passed these laws despite knowing they would severely burden Native American voters.”