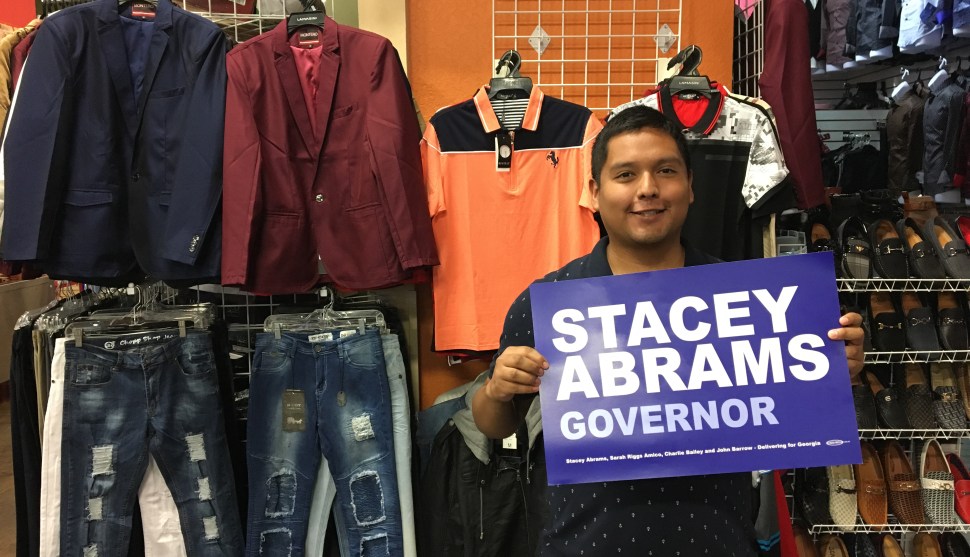 On a recent Monday, Georgia Democratic gubernatorial nominee Stacey Abrams held a campaign rally along Buford Highway, a stretch of road north of Atlanta famous for its diverse array of immigrant-owned businesses—Korean beauty parlors, Chinese bakeries, Malaysian noodle houses. The rally took place in the Plaza Fiesta, a mall full of stores and restaurants that cater to metro Atlanta’s rapidly growing Latino community. Standing at the podium, Abrams had to compete for attention with a display of cupcake-like quinceañera gowns fanning out behind her. “They’re always trying to count you out,” she told the mostly Latino crowd of about 100 supporters. “But we’re counting on you.”

A decade ago, Georgia’s Latinos would have been easier for politicians to overlook. But their community has been growing faster here than in any other state, according to the Pew Research Center. As of 2015, the center estimated, the population hovered around 1 million. The number of Latinos who voted in Georgia more than tripled from 2004 (34,000) to 2016 (127,000).

“There has been some very anti-immigrant rhetoric on one side of this campaign.”

As Abrams knows, Latinos could make a big difference in this year’s supercompetitive gubernatorial race. Over the last few months, her campaign has kicked its Latino outreach efforts into high gear, holding events with business owners, community leaders, and curious citizens, and dispatching an army of bilingual volunteers to canvass neighborhoods.

It’s unclear whether the campaign’s hustle will be enough to clinch the election for Abrams. In the 2014 governor race, Democrat Jason Carter got 53 percent of the Latino vote but lost to Republican incumbent Nathan Deal. In Georgia, as elsewhere, Latino voters behave like independents: They tend to lean left on political issues like immigration and education, but Republican candidates’ socially conservative views often align with their Catholic values.

There has been plenty of speculation about the import of the Latino vote in the midterms. While polling suggests the majority of Latino voters plan to vote for Democrats, many pundits argue turnout could be underwhelming. For that reason, candidates across the country are, like Abrams, doing all they can to mobilize Latino voters.

But not all candidates. Despite a neck-and-neck race, the Republican contender, Georgia Secretary of State Brian Kemp, has been largely hostile to immigrant communities. In one TV ad, he threatened to round up undocumented immigrants in his truck and take them back to wherever they came from. Also, in a recent direct-mail campaign, he falsely claimed Abrams wanted to give undocumented immigrants the right to vote. (The Kemp campaign didn’t respond to my questions about its outreach efforts.)

Jerry Gonzalez, executive director of the nonpartisan Georgia Association of Latino Elected Officials (GALEO), says Latino voters are paying attention to those messages. “There has been some very anti-immigrant rhetoric on one side of this campaign,” he told me. “That’s the environment in which people are making their choices.”

GALEO had set out to register 1,000 new Latino voters by Election Day but surpassed that ambitious goal by the beginning of October, with 1,200 and counting. Part of that work, Gonzalez says, is making sure those new voters, no matter what language they speak, understand their rights.

Those rights include registering to vote without having to show naturalization papers. In 2016, Georgia, along with Kansas and Alabama, passed a law that voters must show proof of citizenship when registering to vote using federal forms. An appeals court later blocked that requirement. But Gonzalez’ group discovered that many Latino immigrants “were being flagged [improperly] as noncitizens.” Now, GALEO volunteers attend every naturalization ceremony to register voters on the spot. When it turns in the forms, the group includes a copy of each new voter’s naturalization papers just in case. “So this fixes that—they have proof of citizenship right there, so it’s easier,” Gonzalez says. GALEO has registered more than 30,000 new voters at these ceremonies since the group’s 2003 founding.

To see this effort in action, I attended a naturalization ceremony last week with GALEO policy analyst and program coordinator Harvey Soto at a Citizenship and Immigration Services facility near Atlanta. It was the final ceremony during which freshly minted citizens could register as midterm voters—October 9 being Georgia’s registration cutoff. After the ceremony, 99 beaming new Americans waved miniature flags and streamed into the room where friends and family members were waiting to congratulate them. Soto stood by the elevators and said in Spanish over and over, “Remember to go upstairs to register to vote! It only takes a few minutes!”

Valeria Contreras, a 19-year-old whose family brought her here from Peru when she was four, said Abrams’ personal story appealed to her. “She came from nothing,” Contreras said.

One woman frowned and said she’d rather do it online. “You have to do it in person the first time. Then after that you can renew online,” Soto said. “Plus, if you do it today, you can vote in the November elections.” The woman consulted with her husband, changed her mind, and headed upstairs.

The handful of new citizens I interviewed all said they planned to vote for Stacey Abrams. Valeria Contreras, a 19-year-old whose family brought her here from Peru when she was four, said Abrams’ personal story appealed to her. “She came from nothing,” Contreras said.

Indeed, Abrams, who grew up poor and still has student debt, has emphasized her own story on the campaign trail. At the Plaza Fiesta event, she talked about her background and reminded the crowd that she supported full scholarships to public universities for all Georgia students, including noncitizens. “You don’t have to be documented to be smart,” she said. The crowd cheered.

Among the attendees was David Rojo, a 24-year-old whose parents came to Georgia from Mexico shortly before he was born. A registered Republican, Rojo said he’d only ever voted for a Democrat once before—in the 2016 presidential election. This year, he planned to vote for Abrams because of her stance on education. “Latino students don’t necessarily go to four-year colleges, because their parents don’t know because they came to America only 5 or 10 years ago,” he said. “I like how she’s going to apportion money to give to education.” Rojo added that he was annoyed that Kemp focused on immigration at the exclusion of other issues, and he didn’t like that Kemp supported arming teachers.

After the rally, Abrams visited a few business owners in the plaza who proudly showed off their wares. She then made a beeline for a snack stall that sold sodas from Latin America. “I must have a Pineapple Fanta,” she told her handlers. The bemused proprietor handed her the soda and chuckled.

It’s hard to say whether Abrams’ Latino outreach will tip the scale in her favor—recent polls have the candidates in a dead heat. But GALEO’s Gonzalez believes that future candidates will have no choice but to pay heed to the interests of Georgia’s Latinos. “This election cycle, we weren’t quite sure what the enthusiasm would be,” he told me, “and we were blown away.”