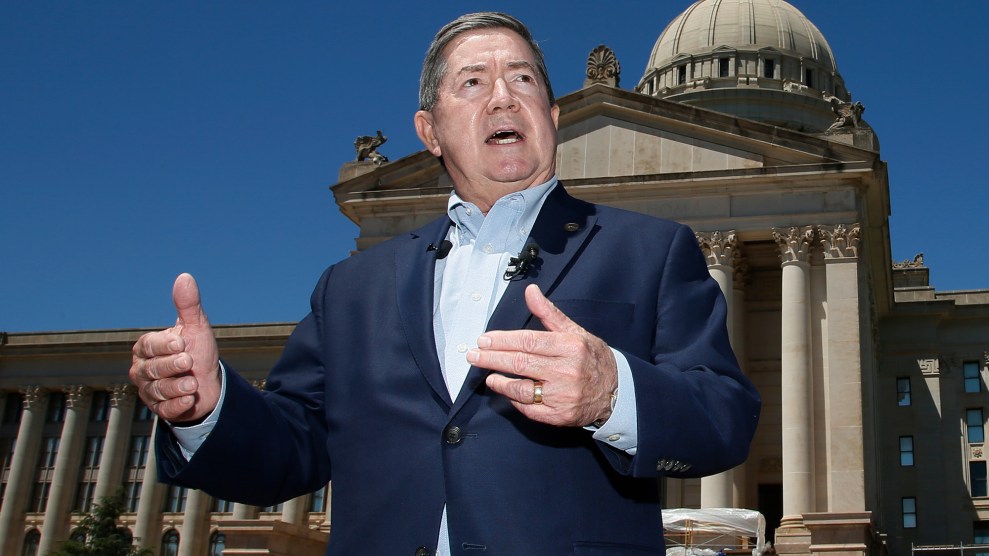 Oklahoma would seem like the least likely of places to be poised for a progressive comeback. The state, which Donald Trump won in 2016 by 36 points, has been under the Republican Party’s thumb for nearly a decade. Home to the Senate’s most outspoken climate-change denier, Sen. James Inhofe (R-Okla.), and the former embattled Environmental Protection Agency Administrator Scott Pruitt, its capitol grounds famously feature an oil rig, a permanent testament to the power that oil tycoons wield in the state.

But 2018 has been an unusual year in Oklahoma, as in many parts of the United States. After years of tax cuts and declining budgets, a nine-day teacher’s strike in April that captured national headlines ended with a union victory: a pay increase and Republicans approving the first new taxes since 1990.

Growing resentment over years of declining education spending, low teachers’ pay, and Gov. Mary Fallin’s rejection of federal Medicaid expansion have shifted the ground to create a surprisingly competitive open gubernatorial race in a state that has had a sizable GOP supermajority for six years. (Fallin’s approval rating has sunk to the teens.)

The GOP candidate, Kevin Stitt, rode the Republican establishment backlash to victory in a primary runoff in August. His pitch to voters is as the outsider businessman who spins his lack of experience and even his nonexistent voting record as a citizen as a qualification. He founded the 1,200-person company Gateway Mortgage Group, which is a defendant in an ongoing case alleging that it sold defective mortgages to Lehman Brothers, contributing to its 2008 bankruptcy that roiled the mortgage business.

Following the reliable narrative of most businessman who try their hands at politics, he insists the government should run more like a company. “It’s the same thing I’ve been doing in the private sector for 25 years,” Stitt said in August before winning the runoff against Oklahoma City Mayor Mick Cornett. “I’m not an attorney; I’ve not been a city councilman who had one vote on a nine-person panel. We’ve been getting it wrong by hiring people who are more of the political type.”

The race “is going to come down to how much energy is still left from the strikes.”

Until recently, any Republican would have had an easier ride to victory than Drew Edmondson, who comes from a family of Democratic Oklahoma politicians and easily won the primary in June having been a popular state attorney general. But polls since the primary have shown Edmondson in striking distance in the competitive race, though the most recent surveys still give Stitt a few points’ advantage.

The outsider-branded campaign by Stitt—who is otherwise running on a generic Republican platform of opposing the tax increase from earlier this year—may be why Edmondson’s own record as a 16-year attorney general hasn’t been a focal point in the race. The election pits the traditional power of oil and gas supporting Stitt against the resurgent power of teachers’ unions backing Edmondson.

Last winter, I sat with Drew Edmondson at his campaign headquarters in Oklahoma City, just before the Christmas holidays. I was in Oklahoma reporting a story on his successor to attorney general in 2010, then-EPA Administrator Scott Pruitt. Edmondson explained to me his philosophy in being the state’s top lawyer, which included major multi-state cases against corporations like the tobacco and poultry industries.

He considered his office to be “the people’s law firm,” implying that during Republican administrations, they approached it differently (Pruitt, for example, focused on suing the federal government over environmental regulations and health care). “I was of the philosophy that we were there to enforce consumer protection laws and antitrust laws and environmental laws,” he said.

As his campaign for governor has played out over the last 10 months, you can see that philosophy expressed in a number of different ways. For one, he has centered his campaign around education and risked opposition from heavy hitters statewide with his proposal to fund investments in public schools, health care, and infrastructure through taxes on oil, cigarettes, and capital gains. Edmondson’s tax, the campaign says, would raise $300 million to go to infrastructure and education.

All of this is par for the course for a Democratic candidate. But a few years ago, the plan would have been politically impossible, since it goes further than what Republicans passed earlier this year, in response to backlash over Oklahoma’s four-day school weeks and teacher strikes. He proposes a 7 percent gross production tax on the oil and gas industry, eliminating a capital gains’ deduction for high-income earners, and a 50-cent hike on cigarette taxes. Edmondson doesn’t always seek to focus attention directly on that plan. His op-ed for Tulsa World emphasized generic talking points about raising teachers’ pay but included little on how he proposed to fund it.

In effect, though, Edmondson risks doubling the anger from Oklahoma’s powerful oil moguls for hitting their capital gains as well as their fracking wells. The oil industry has intense interest in the matter, demonstrating its concern by spending heavily on the primaries (Stitt was not its first choice). Oklahoman Harold Hamm, a Trump adviser and fracking billionaire who has waged a public campaign against a higher gross production tax, warns flatly, “We need to look for other sources of revenue.” When the legislature passed the oil tax increase this spring in response to the strikes, Hamm sat among the spectators in the gallery.

The gross production tax for the oil and gas industry has come under reconsideration in Oklahoma in the last few years, as the price of oil has declined amid the fracking boom, and oil and gas revenue plunged. But Oklahoma frackers faced especially low tax rates during the most productive early years of a well’s existence, facing overall effective tax rates of 3 percent, according to the Oklahoma Policy Institute. That’s considerably lower than Texas, Utah, and North Dakota, where the rates range from 6 to 8 percent.

In looking for revenue to fund pay hikes after the teacher’s strike, the legislature reluctantly increased the tax rate from 2 to 5 percent for the first three years of a well’s operation, thereby warding off a possible ballot initiative that would have raised it even higher. Of the 19 Republicans who voted against it, eight lost their primaries for reelection, four did not run again, and three face term limits. “It’s been fascinating to see Republicans talk about the need to raise teachers’ salaries and spend more on education and admit they went too far in cutting taxes and talking about the need to do away with oil tax breaks for industry,” says David Blatt, executive director of the left-leaning Oklahoma Policy Institute. “It’s so at odds with 40 years of Republican orthodoxy and even more at odds with what’s being said in DC.”

It’s possible the existing hike might have diminished some of the momentum behind Edmondson’s plan to increase the same tax to 7 percent. Gary Allison, sustainability law professor at the University of Tulsa, observes that in assessing how Edmondson’s pitch will go over with voters, the race “is going to come down to how much energy is still left from the strikes.”

Oklahoma voters have recently rewarded, not punished, politicians for taking on the state’s heavy hitters.

“There just isn’t the knee-jerk opposition to taxes that we’ve been accustomed to for a long, long time,” says Blatt. “Right now, it is not a good time to be running as a hard-line conservative in Oklahoma.”