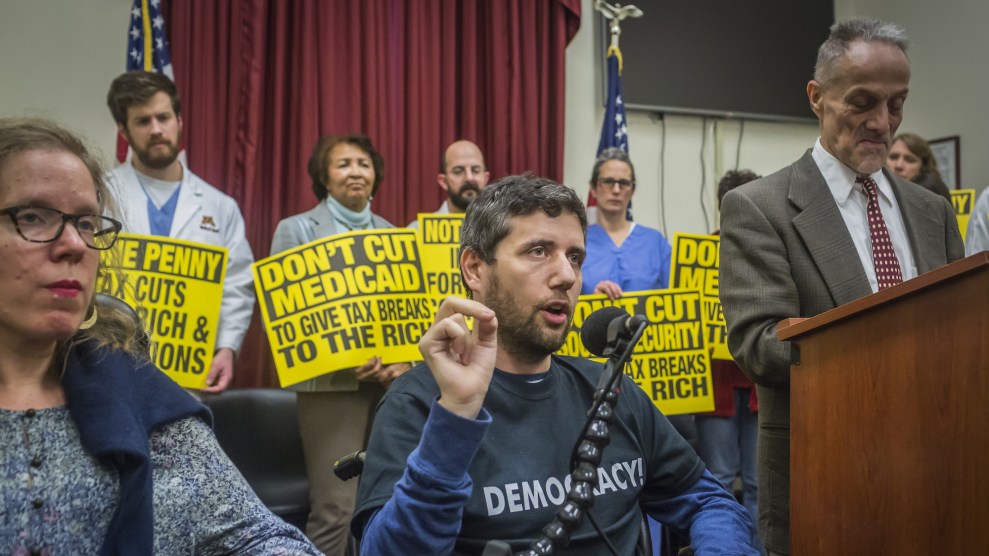 With the midterm elections weeks away and Senate Majority Leader Mitch McConnell (R-Ky.) reviving talk that social spending programs need to be cut in order to reduce the deficit, Democrats in Congress are trying to remind voters of the effects the GOP’s proposed budget would have on Medicare, Medicaid, and Social Security.

A new report released Wednesday by the Democratic Joint Economic Committee analyzing the budget resolution that House Republicans proposed earlier this summer shows that proposed cuts to Medicaid, Social Security, and the Affordable Care Act could result in significant income losses to 40 percent of Americans. According to the report, the average beneficiary would lose an average of $1,500 per year in services or tax credits, with that number doubling to $3,000 for the average household.

This new report comes as Republicans have started to raise alarm bells again about deficits. A Treasury report released Monday showed that the federal deficit ballooned from $666 billion to $779 billion in fiscal year 2018, leading to renewed alarm from Republican leaders. In an interview with Bloomberg News on Monday, McConnell called the deficit “disturbing” and pointed to cutting entitlement programs as a means of debt reduction.

Sen. Martin Heinrich (D-N.M.), the Democratic ranking member of the Joint Economic Committee, calls McConnell’s statement “budget hypocrisy” and says that “Republicans now want to balance the budget on the backs of working Americans and seniors.”

According to the JEC report, the cuts that have been suggested by House Republicans would disproportionately affect low-income households. The report projects that by 2025, tax cuts for the top-earning 1 percent of Americans passed by former President George W. Bush and President Donald Trump are projected to run up to $2 trillion in deficit—the same amount Republicans want to slash from the social safety net. In their budget proposal from this summer, House Republicans said they wanted to repeal the ACA and massively cut health spending—$1.5 trillion in Medicaid and ACA spending and $537 billion in Medicare cuts. The proposal would also reduce spending on other social welfare programs, such as the Supplemental Nutrition Assistance Program.

“Any cuts to these programs will have serious impacts on the lives of many Americans,” Heinrich wrote in a statement to Mother Jones. “We should be investing in the health and security of our families and seniors, not trying to stick them with the bill to pay for Republicans’ reckless tax giveaways and budget deficits.”

The JEC report comes on the heels of a study released earlier this week by the Hamilton Project, an economic policy project at the nonpartisan Brookings Institute, that outlines how new efforts by Republicans to impose work requirements poses risks for programs such as Medicaid and food stamps. Despite Republican assertions that exemptions protect the most vulnerable Americans from the cuts, the new report concludes that the requirements have unintended risks to households. “Household budgets are generally unified—if you’re going to reduce resources in the household you’re going to reduce resources to the children and the seniors,” says Jay Shambaugh, the director of the Hamilton Project and an author of the report.

The report estimates that very few Americans enrolled in these programs don’t work because they don’t want to. In fact, the report found that for participants aged 18 to 49, only 1.1 percent of recipients reported not wanting to work as a reason for not being in the workforce, wheres 7.3 percent of nonexempt workers cited health or disability reasons. For nonexempt Medicaid participants aged 50 to 64, nearly 9 percent cited health issues. Shambaugh says that increasing the earned income tax credit has historically been a much more effective way of pulling workers into the labor force.

“There are lot of people who are sanctioned by work requirements that are actually trying to do work,” says Shambaugh.

The swift impact of work requirements have become especially clear in Arkansas, where 4,000 Medicaid recipients were removed from beneficiary rolls in September. According to the JEC analysis, 60.7 percent of households in Arkansas are beneficiaries of Medicare, Medicaid, Social Security, or ACA tax credits— the third highest rate in the country. Arkansas is just one of several states with federal approval to introduce work requirements to do so. An attempt in Kentucky was blocked by a federal judge over the summer.